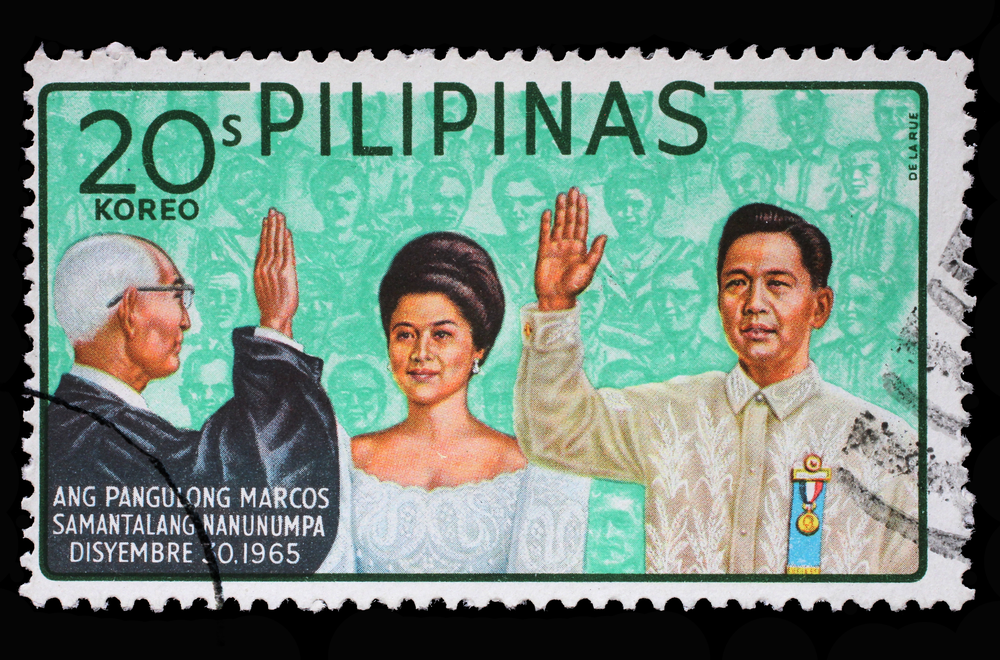 Back to the future: All hail Ferdinand Marcos!

Proving that the world is truly in retro mode, the Philippines is getting ready to once again elect Ferdinand Marcos—not the infamous dictator but his son. Junior’s astonishing rise in the presidential election has sparked a battle over the memory and legacy of his parents’ 20-year dictatorship.

Remind me about Marcos…

Ferdinand and Imelda Marcos ruled the Philippines together—in what some call a “conjugal dictatorship”—for twenty long years. Their reign was marked by industrial-scale corruption and widespread human rights abuses.

Meet Ferdinand Marcos Sr: A card-carrying member of the Filipino elite, Marcos came to power when he was elected president in 1966. Six years later, he declared martial law to remain in power—and side-step the constitution which imposes a two-term limit on presidents.

Marcos Sr believed he had the divine mandate to rule the nation—referring to himself as malakas (strength) and wife Imelda as maganda (beauty) in reference to the Philippine Adam and Eve. Historians describe him as “capable, brilliant, cunning, utterly rapacious.” Anti-corruption watchdog Transparency International in 2004 named Marcos the second most corrupt leader of all time, behind Indonesian dictator Suharto.

Meet Imelda Marcos: It was love at first sight for the Marcos lovebirds—who married just 11 days after their first meeting. He was an up-and-coming Congressman at the time. 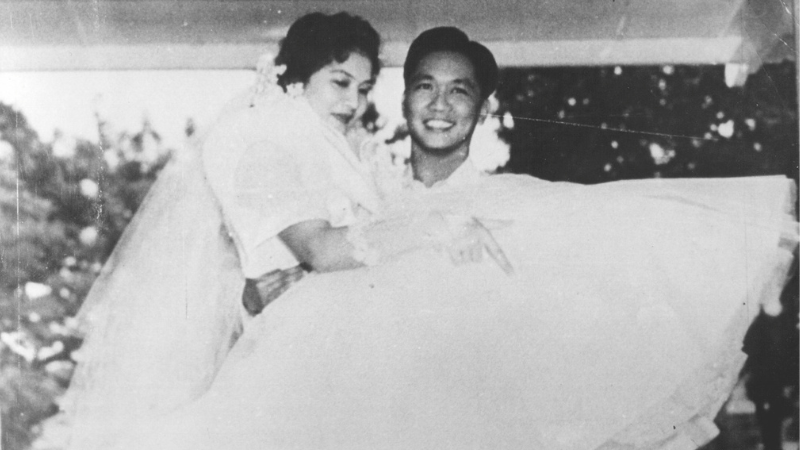 Imelda went on to become a political diva with a global reputation for excess. The Steel Butterfly charmed US presidents and dictators like Qaddafi alike with her dazzling looks and style. Here she is dancing with Henry Kissinger:

No celebrity today can match her voracious appetite for shopping—having once spent $9.5 million over 90 days which included $611,000 on gems from Cartier. And this is back in 1983. Her legendary collection included bullet-proof bras, £80,000 dresses and—most famously—3,000 pairs of designer shoes. Asked about her extravagance, she declared it “inspired the poor to dress better.”

Trigger warning: This bit below includes a description of sexual violence.

The Marcos legacy: is best summed up in a single number: $10 billion—which is how much they plundered from the country during their reign—which is best described as “a world-class kleptocracy.” Then there are mass arrests, kidnappings and executions—including the assassination of opposition leader Benigno S Aquino which may have been planned by Imelda herself. Over the course of their rule, 70,000 people were imprisoned, 34,000 tortured, and 3,240 killed.

We will leave you with just one testimony from an activist who was arrested:

“I would receive slaps on my face every time they were not satisfied with my answers and that was all the time…They hit strongly at my thighs and clapped my ears. They tore my duster (dress) and fondled my breasts…The hardest thing was when they put an object in my vagina. That was the worst part of it and all throughout I was screaming. No one seemed to hear.”

The ouster: The Marcos family was eventually overthrown in 1986 after a popular uprising—airlifted out of Manila by the Americans and sent into exile in Hawaii. According to witnesses, Ferdinand growled “It’s all your fault” at Imelda as they were whisked away. Marcos Sr died in Hawaii in 1989. And his embalmed body was carefully preserved until 2016—when it was finally buried with full military honours—with the blessing of President Rodrigo Duterte. This image of an adoring Imelda kissing Ferdinand’s glass coffin sums up the psychopathic reign of this couple. 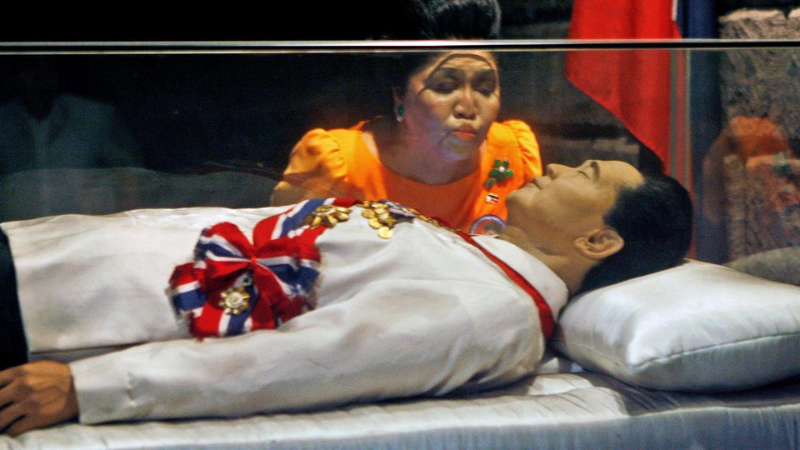 Their son is going to be president? How did that happen?

The Philippines has 319 dynastic families—and 234 remain firmly in positions of power. So when the Marcos family returned to the country in 1991, they were embraced by their fellow members of the elite: “They were treated like celebrities, like the Kardashians. They inherited the resources, the network and the wealth that allowed them to bounce back.” And they cosied up to Duterte—and his daughter Sara—which gave them the official seal of approval.

The big plan: was always to return to power. Imelda ran for president twice and lost both times—but managed to secure a congressional seat. In a 2019 documentary, she declared: “I miss the clout of being first lady ... I miss the clout wherein you can do so much”—adding that she wants her only son to follow his father's footsteps and become president. Well, now the 92-year-old may finally get her wish.

Meet Ferdinand ‘Bongbong’ Marcos: aka BBM. The first thing you should know about Junior is that he was 28 and already a governor when his family went into exile. So he had full knowledge of his parents’ activities—and perhaps even participated in them. Bongbong Marcos’ rise to national office has taken more time than he would like. He was first elected as congressman in 1992—but did not become a senator until 2010. He also lost the Vice President race in 2016—to human rights activist Leni Robredo—who is now his main rival in the presidential race.

Rewriting history: Marcos Jr has flagrantly whitewashed his family’s history with a powerful and well-financed disinformation campaign—across TikTok, Facebook and Youtube. This is especially effective in a country that tops the world in time spent on social media.

And he has recast his father—who he praises for his "style of work"—as a great man: “He had a very clear understanding of what needed to be done and how to do it, and that I think was his best quality as a leader.” Marcos Jr has even challenged the authenticity of Amnesty data on human rights abuses committed by his family.

As a PR expert explains: “They have leveraged greatly on what is known as myth-building, the new nostalgia. They are painting the martial law era of his father as the golden era of the Philippines.” And Marcos Jr has wrapped it around a feel-good message of unity and hope—with the slogan “together we shall rise again.”

Key point to note: Marcos’ ability to erase history has a lot to do with the age of his supporters:

“The majority of Marcos’ supporters are those under 30, voters who were not born when his father imposed nationwide martial law and presided over human rights violations, corruption, and a massive economic slowdown. The younger Marcos also knows where to meet these supporters: his team engages with millions of users on social platforms—especially TikTok and Facebook—both inside the Philippines and abroad.”

Also this: More than half of registered voters were born after Marcos Sr left power.

Normalising dictators: Outgoing Duterte—who has served two terms and cannot contest the race—is infamous for his violent language and a brutal drug war that has killed thousands. But he also helped normalise a strongman style of leadership:

“Rodrigo Duterte’s authoritarian populism served as the front act to the return of the Marcoses, fuelled by a wave of authoritarian nostalgia. And this is symptomatic of a worldwide trend in which there is now an ongoing wave of democratic regression.”

The bottomline: Ferdinand Marcos Jr is on track to win a landslide victory against a human rights activist with a long-established political record. He is 33 points ahead in the poll. Enuf said.

Washington Post has a good overview of the race. Reuters and NPR chart the Marcos family’s return to glory. Reuters also reports on the survivors who are furious at Marcos’ return. Rappler looks at who constitutes Marcos Jr’s base—while TIME looks at why he is winning. LA Times takes an in-depth look at the misinformation campaign that is core to his success. The Guardian offers hope in this report on Leni Robredo and her army of nearly 2 million volunteers, known as Kakampinks. For more on Imelda Marcos’ insane lifestyle, we recommend reading Town & Country or Telegraph UK.