The government’s case against PFI

Yesterday, the government banned the Muslim organisation—Popular Front of India—and eight of its affiliates. It is now illegal to be a member of any of these groups—a crime that is punishable by “an imprisonment of two years that may extend to life imprisonment and even the death sentence in certain circumstances.” We now know more about the government’s case against PFI:

“The notification said some of the founding members of the PFI were leaders of the Students Islamic Movement of India (Simi) and that the PFI had links with the Jamat-ul-Mujahideen Bangladesh. Both Simi and the JMB are proscribed organisations. The home ministry said the PFI also had links with global terrorist outfits like the Islamic State, and had ‘participated in terror activities in Syria, Iraq and Afghanistan’.”

The allegations also link PFI to killings, riots and, in one case, chopping the hand of a college professor. A more cynical ex-Intelligence Bureau chief claims the spectacle has been staged for the upcoming state elections in Gujarat and Karnataka. The Telegraph and The Hindu have more details.

The UK’s central bank announced that it will buy long-term government bonds to the tune of £65 billion ($70 billion) for the next two weeks. This unprecedented step was taken to prevent a crash in the market for government bonds—which are tied to the country’s biggest pension and insurance schemes.

Reminder: The UK economy has been tailspinning ever since Liz Truss’ government announced massive tax cuts—at a time of runaway inflation—which in turn have triggered rising interest rates. All of which has the makings of a “doom loop.” Here’s how one expert sums it up: “This looks like disarray—economic policy being driven by a drunk driver. Global economic commentators basically think that British economic policy has lost its mind.” Reuters has details of the BoE intervention, while The Guardian has more on the political fallout.

Speaking of central banks: According to a new report, three of the world's largest central banks—the US Federal Reserve, the European Central Bank and the Bank of England—are financing corporations closely linked to the destruction of the Amazon rainforest in Brazil. They have bought millions of dollars of corporate bonds from Brazil's agri-business giants—linked to deforestation, abuse of indigenous rights and land-grabs in Brazil. (The Guardian)

‘Referendums’ were conducted in four provinces occupied by Russian troops to show popular support for joining Russia. The Kremlin-installed administrations claim the results show near-total support—as high as 99.23% in some places. This lays the ground for President Putin to announce the formal annexation of these territories—which constitute 15% of Ukraine. Why this matters: any attempt by Ukraine to recapture the territory can be framed as an attack on Russian soil—and an excuse for all-out war. FYI: New Delhi has refused to comment—saying its views will be made plain at an upcoming UN meeting. (BBC News)

Fleeing Russian soil: Satellite images show a 10-mile (16 km) traffic jam at the border with Georgia—as thousands of citizens flee the country. There are similar lines of cars at the borders with Mongolia, Finland and Kazakhstan. The panicked exodus is a response to the ‘partial mobilisation’ announced by Putin—to increase the number of troops needed for a renewed Ukraine offensive. (Washington Post) 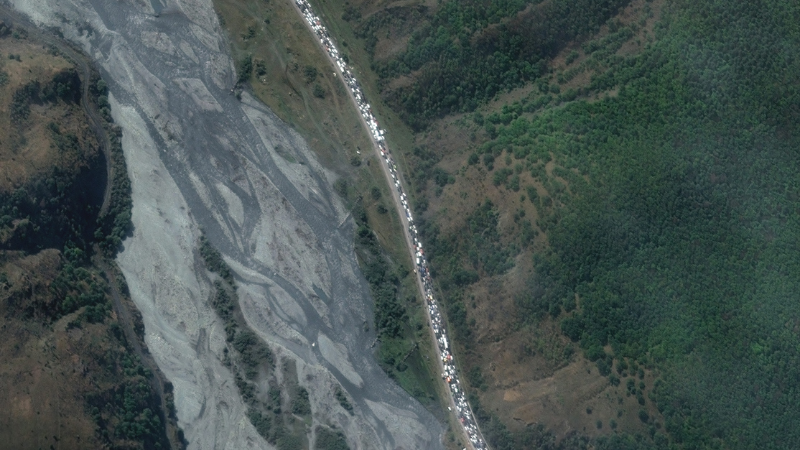 A new clinical trial of a drug called Lecanemab shows that it can slow a patient’s cognitive and physical decline by as much as 27%. Why this is a big deal: this is the first time that any treatment has slowed the progress of Alzheimer’s—which affects 55 million people around the world. Lecanemab works by reducing clumps of beta amyloid—a toxic protein—in your brain that are triggered by the disease. The downside: around 21.3% of the patients experienced side effects such as brain swelling or bleeding. Something to remember: the results have not been peer-reviewed as yet. (Washington Post)

The government has appointed Lt General Anil Chauhan (retired) as the new CDS—the highest military post in the country. It had been vacant ever since General Bipin Rawat’s death in an airline crash in December. Indian Express has more on Chauhan.

Also appointed: R Venkataramani as the Attorney General of India. The Telegraph has that story.

Eyeing a top job: Congress party veteran Digvijaya Singh—who plans to file his nomination papers for party president in the upcoming election. According to Indian Express:

“The surprise move is being seen by a section of leaders within the party as either a part of the leadership’s ‘Plan B’ or a ‘smokescreen’ to pressure Rajasthan Chief Minister Ashok Gehlot to accept the leadership’s wish that he contest for the top post and leave the decision on his successor in the state to the Gandhis.”

Meanwhile, in Kerala: Rahul Gandhi is still wandering the state on his ‘Bharat Jodo Yatra’—which he seems to have confused God’s Own Country with, well, the country. That said, here’s a sweet photo of him on the road: 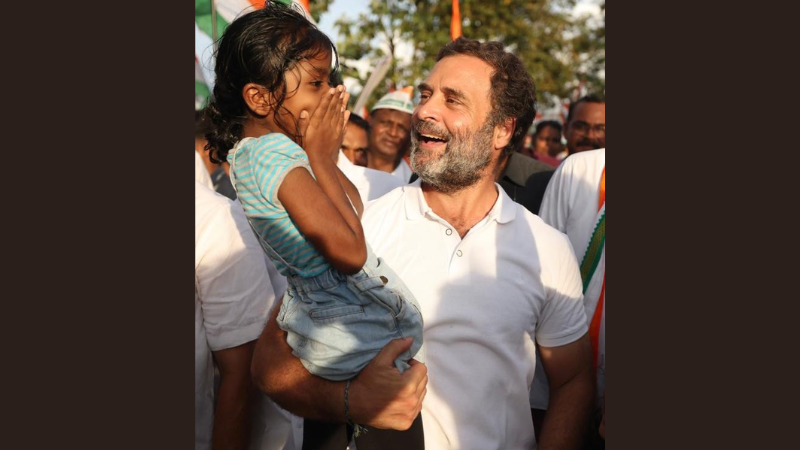 A 37-year-old male passenger on a flight from San Francisco to Singapore claimed to have a bomb in his carry-on bag—and assaulted the crew. The Singapore military immediately mobilised two Air Force fighter jets to escort the plane safely to Changi airport. There was no bomb, but the man may have been high on drugs. (CNN)

Speaking of air travel: If you’re sick and tired of Bangalore traffic, you may want to rent a helicopter to get you to the airport instead. A company called Blade will now run two flights between Bangalore International Airport and HAL airport—at 9 am and 4:15 pm. And it will add more connections to other parts of the city soon. The price of convenience: Rs 3,250. Hindu Business Line has more details.

A new global report reveals that 49% of the world’s species have declined in numbers in 2022. This marks a steep jump of 9% since 2018—when the last such report was released. Only 6% have witnessed an increase in their numbers. One in eight species are at risk of extinction. What's noteworthy: "The ten countries with the highest proportion of globally threatened species among their Avian fauna are all islands—reflecting the devastating effect of invasive alien species on island bird population.” Quote to note from the lead scientist: "Birds are useful for telling us about the state of the planet. What they say is that nature is in poor condition, lots of species are in decline.” (Irish Times)

The disappearance of a Chinese film

‘Return to Dust’ is a gritty, low-budget drama set in rural China—and focuses on the hardships of an impoverished couple trying to survive. It debuted to rave reviews at the Berlin International Film Festival in February—and became a surprise summer hit in China. But the movie was a bit too ‘real’ for Beijing’s comfort—since it violates President’s Xi’s command to the entertainment industry to “ensure an atmosphere of national positivity and stability.”

The government yanked the movie from theatres in September—and it has now disappeared from all streaming platforms. There’s a ban even on mentioning the film on the Chinese version of Twitter, Weibo. Director Li Ruijun told the Economist: “Everyone knows there are lots of poor people. But the government doesn’t want Chinese people to see too much of it.” FYI: pirated versions of the movie are still available on YouTube. The Economist and The Guardian have more details—and you can watch the trailer below:

In happier entertainment news: Wrestler-actor John Cena is officially the nicest man in Hollywood. He set a new Guinness World Record for granting a whopping 650 wishes of children—made through the ‘Make-A-Wish’ foundation. The organisation fulfils the wishes of children—between 2 1/2 and 18 years old—who have been diagnosed with a life-threatening illness. Watch a feel-good compilation of the wishes he’s granted over the years below. (NPR)

One: The world’s first all-electric aircraft successfully completed its maiden eight-minute flight—flying to an altitude of 3,500 feet. Alice uses battery technology similar to an electric car—and can fly for an hour or 440 nautical miles—after 30 minutes of charging. (CNN)

Two: The latest beauty delivered by the James Webb Telescope is this incredible image of a spiral galaxy—called IC 5332. It is 29 million light years away from the Earth.

New Scientist explains why the photo is remarkable for its clarity. 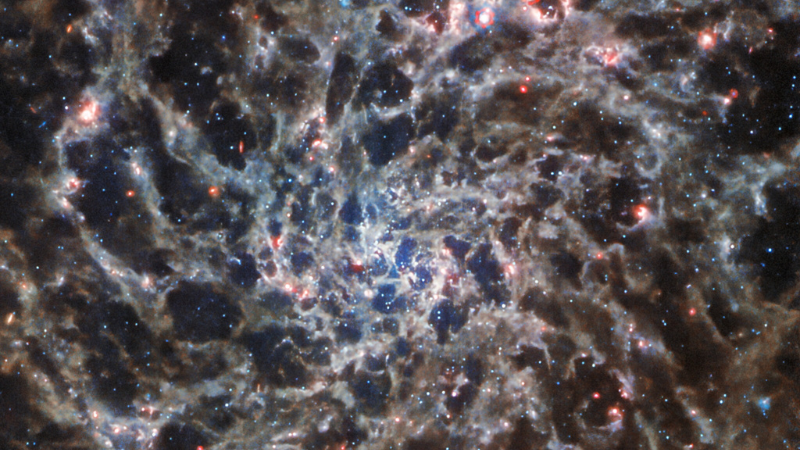