Join an awesome editorial team and get a front row seat at an exciting media startup. Our trainees learn everything from backend publishing and social media content to product strategy in a highly collaborative and fun work environment.

What we're looking for: a full time 2-month commitment; strong editing skills; attention to detail; knowledge/interest in news; enthusiasm and initiative. Canva skills are a plus.

What we don't care about: location. All work is remote.

Send us your resumes at talktous@splainer.in

All eyes were on Beijing—where the Communist Party congress kicked off on Sunday. Since there are no elections, the grand meeting—held once in five years—offers the clearest indication of who’s in charge and where the country is headed. The top boss is most certainly President Xi Jinping—who is likely to be appointed for a third term.

In his speech, Xi made no apologies—either for the zero-Covid policy or the crackdown on Hong Kong. But he also warned of darker times ahead—signalling more turmoil with the US:

“Be mindful of dangers in the midst of peace. Get the house in good repair before rain comes, and prepare to undergo the major tests of high winds and waves, and even perilous, stormy seas.”

And Xi took a tough line on Taiwan—which China claims as its own:

"We insist on striving for the prospect of peaceful reunification with the greatest sincerity and best efforts, but we will never promise to give up the use of force and reserve the option to take all necessary measures."

Meanwhile, in London: Liz Truss isn’t looking quite as strong. Over the weekend, she did a massive U-turn on corporate taxes—and sacked her Chancellor of the Exchequer Kwasi Kwarteng. All of which was a desperate attempt to undo the chaos wreaked by her recent mini-budget. But it does not seem to have appeased many Tory leaders—some of whom are now asking for her head—claiming her resignation is in the “national interest.” The Independent UK has more on the brewing coup.

Two recruits opened fire at a military training ground near Ukraine—leaving 11 dead and 15 injured. While authorities called it a terrorist attack, the tragedy reflects the growing rage against the partial military draft—declared by President Putin to bolster troop numbers. Faced with resistance, police and military officers are literally grabbing men off the street—as citizens go into hiding to avoid being drafted. Washington Post has more on that story—while the New York Times describes how Moscow is rushing poorly trained and equipped recruits to the frontline.

Wire vs Meta: The latest update

The context: The Wire published a big scoop that appeared to show Meta giving special XCheck privileges to BJP IT chief Amit Malviya—including the power to take down posts at will. These included posts of an anonymous satirical collective, @cringearchivist. Meta responded by saying that the documentation was “fabricated” (see: our Big Story).

The battle royale between the two took all sorts of twists and turns over the weekend. We can’t pretend to explain the tech elements involved but here’s the general gist:

A prison conflagaration in Iran

The Evin Prison has long been used to detain political prisoners since the days of the Shah. On Saturday, a massive fire broke out in Evin—killing four and injuring 61 inmates. While the state media have blamed “criminal elements,” others say this is what happened:

“The melee started in a ward of the prison that houses inmates convicted of financial crimes and other criminal offenses but quickly spread to areas where political prisoners and dissidents are held, prompting guards to bring in reinforcements and firefighters to put down the protests and extinguish the fire, according to officials and human-rights activists.”

In other words, the protests appear to have now spread to the prisons—and it is being interpreted as ”another sign that the leaderless movement was spreading beyond the government’s control.” See a clip of the fire below. (Wall Street Journal, paywall, BBC News)

This Asia Cup is coming home!

The women’s cricket team beat Sri Lanka by eight wickets to win the cup on Saturday. The Sri Lankans were only able to score 65/9—a total we beat in just 8.3 overs. The women in blue have won seven out of eight editions of the contest. See the awesome clip with the glittering cup below. (Times of India)

Meanwhile, in Australia: The T20 World Cup kicked off with an incredible upset when  Namibia beat Sri Lanka by 55 runs. See an incredible moment from the match below when Ben Shikongo took two wickets in two balls.

Meanwhile, India is getting ready for its warm-up match against Australia today. Our first official game will be on October 23—against Pakistan. (ESPN)

A row over the hunger index

The Global Hunger Index (GHI) 2022 has ranked India at #107 among 121 countries—which is six notches lower than our 2021 ranking. This has enraged the government—which dismissed the index as “an erroneous measure of hunger” and an attempt to “taint” India’s image. The GHI scores are calculated using four factors: undernourishment, child stunting, child wasting and child mortality. New Delhi points out that three of these are related to kids—and “cannot be representative of the entire population.” The fourth—undernourishment—is based on an unrepresentative survey, and therefore is not reliable. FYI: this is the second consecutive year that the government has rejected the GHI rankings. (The Hindu)

Now that we have imported cheetahs from Africa, Sri Lanka is keen to follow in our footsteps. Colombo has proposed transporting Indian bisons aka gaurs to revive its native population—which went extinct at the end of the 17th century. If it is approved by New Delhi, it will be the first such agreement between the two countries. The Hindu has more on this new kind of wildlife diplomacy.

One: The government is furious over a full-page ad in the Wall Street Journal—that calls out Finance Minister Nirmala Sitharaman and 10 other top officials, declaring: “These Modi Government officials have decimated the rule of law by weaponising the institutions of the state to settle scores with political and business rivals, making India unsafe for investors.” The ad was taken out by Frontiers of Freedom (FF)—a right-leaning think tank led by a Republican party leader. But the government is pointing its finger at Ramachandran Viswanathan—former CEO of Devas Multimedia—whose assets have been seized in India. Also annoying New Delhi: the timing of the ad—since Sitharaman is currently on an official jaunt in Washington DC. The Print has more on Devas. 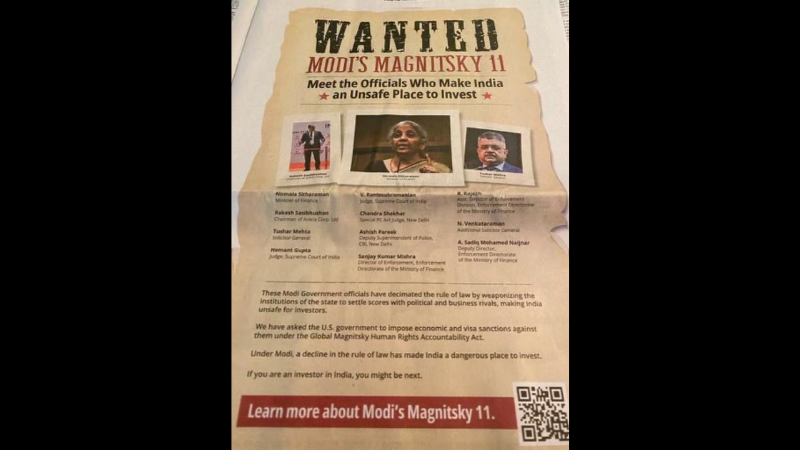 Two: Climate change protests in the UK reached a new high—or low?—when protesters threw a can of tomato soup on Vincent Van Gogh’s ‘Sunflowers’—at London's National Gallery. Yes, the painting is just fine and is back on display. (BBC News)

Three: More polarising: a protest staged by vegan activists in the UK and Scotland—who poured out gallons of milk at supermarkets. They were making a point about the cruel practices of dairy farms—a point that was likely lost on the many Brits who are facing a severe cost-of-living crisis. (Independent UK)