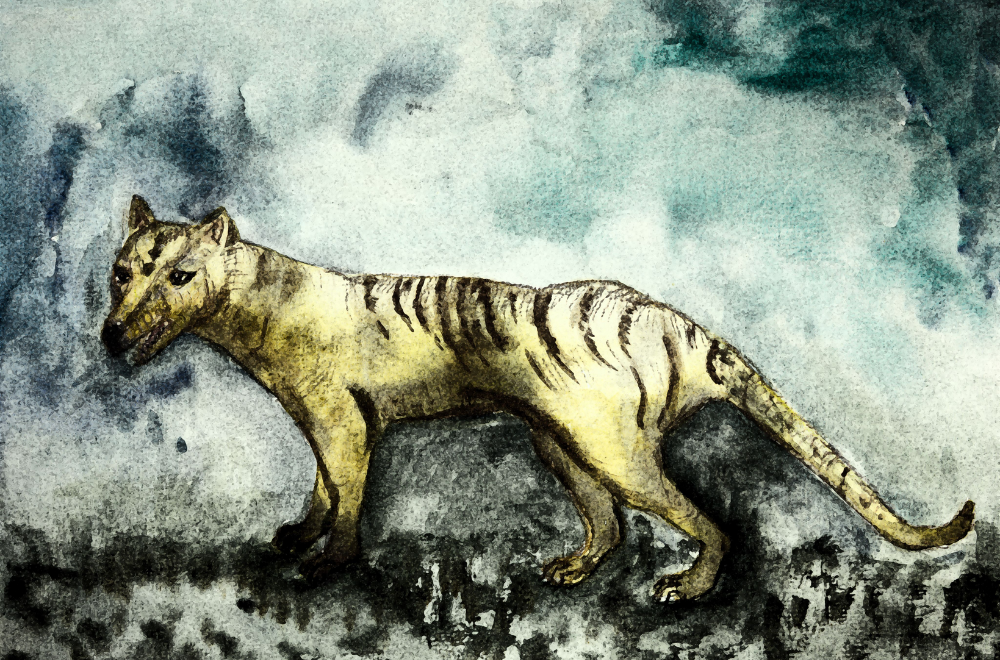 The de-extinction debate: Should we raise the dead?

The Tasmanian tiger is the latest target of an ambitious effort to bring back animals that have long disappeared. But what about the many species that are teetering on the edge of extinction right now? Does this hurt or help them?

Yes, at least that’s the plan. The two marquee projects focus on the woolly mammoth and the Tasmanian tiger—but there are many smaller efforts that focus on other species.

The woolly mammoth: roamed the planet nearly 13,000 years ago—and has been extinct for 4,000 years. The plan is to genetically engineer a hybrid of the Asian elephant using the DNA of the woolly mammoth. The result will have key traits of its extinct cousin, and thrive in the Arctic—which was the original habitat of the mammoth. According to the lead scientist George Church:

“Our goal is to make a cold-resistant elephant, but it is going to look and behave like a mammoth. Not because we are trying to trick anybody, but because we want something that is functionally equivalent to the mammoth, that will enjoy its time at -40C, and do all the things that elephants and mammoths do, in particular knocking down trees.” 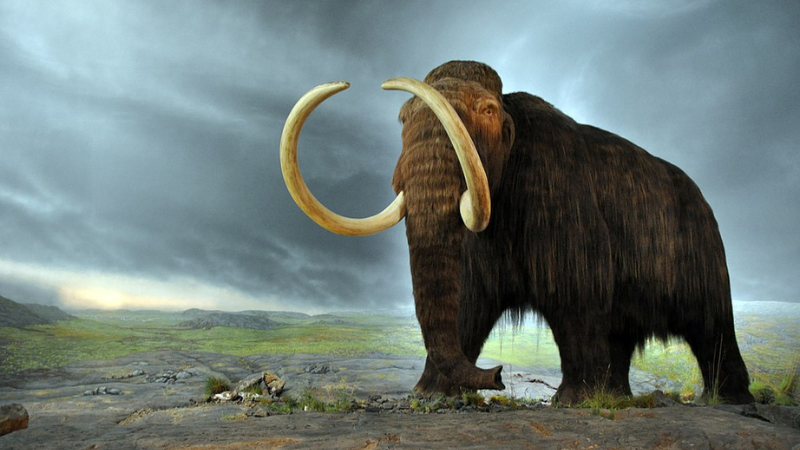 The Tasmanian tiger: The last Tasmanian tiger (aka thylacine) in the wild was killed in 1930. The last captive one died in a zoo in 1936. The scientists will take stem cells from a species with similar DNA—like the fat-tailed dunnart—and turn them into “thylacine” cells using gene-editing techniques like CRISPR. Scientists claim to have “a complete blueprint” of its genome thanks to a specimen held in a museum. They hope the first joeys will be born in about 10 years.

Point to note: Both projects follow the same MO: extract extinct DNA; use gene editing to turn stem cells into embryos; carry embryos to term in a closely related species or in an artificial womb. But the chances of success are higher with a Tasmanian tiger—which has only been gone for 90 years, compared to a woolly mammoth that hasn’t been around for nearly 4,000 years.

Also targeted for resurrection: Specific traits of extinct species—rather than the animals themselves:

“Using an approach called selective back-breeding, some groups are restoring ancient traits from extinct species by selectively breeding individuals that still carry the genes for them. For instance, the Tauros Program aims to back-breed modern cattle to make them more like their pre-domesticated ancestors, the aurochs, and the Quagga Project in South Africa is selecting for zebras that still have genes from the quagga, a subspecies hunted to extinction in the 19th century.”

Failures to note: A similar project to revive the Tasmanian tiger launched in 1999 had to be shelved because “the quality of the DNA was too poor to work with.” And the only successful de-extinction effort involved the bucardo—a species of wild goat. In 2003, scientists used cloning—and a modern goat as a surrogate parent and egg donor. The baby died within seven minutes because of a lung malformation—making it the only species to go extinct twice!

And who is doing this?

The company behind the woolly mammoth and Tasmanian tiger projects is Colossal—whose stated aim is to “jumpstart nature’s ancestral heartbeat”:

The funding: Colossal received $15 million for the woolly mammoth project from the likes of Climate Capital Collective—a private equity firm that backs efforts to lower carbon emissions, and the Winklevoss twins—best known for their battle royale with Mark Zuckerberg over Facebook. The company recently secured $10 million to bring back the Tasmanian Tiger—which is co-financed by the University of Melbourne thanks to a $5 million donation to open a thylacine genetic restoration lab.

Okay, but why are they doing this?

Colossal frames “de-extinction” as an attempt to tackle climate change—and preserve existing species from extinction. For starters, it will endow the endangered Asian elephant with traits that will allow it to thrive in a whole new habitat—i.e. the Arctic tundra. But the bigger pitch is about fighting climate change.

The argument: Releasing hordes of mammoth hybrids will “rewild” the Arctic region which is under great threat due to global warming—which is melting the permafrost (the permanently frozen mix of soil and ice that forms its surface). This in turn is releasing huge amounts of CO2 into the atmosphere. The mammoths would change all of that:

“Today the tundra is dominated by moss. But when woolly mammoths were around, it was largely grassland. Some researchers have argued that woolly mammoths were ecosystem engineers, maintaining the grasslands by breaking up moss, knocking down trees and providing fertilizer with their droppings…The restored grassland would keep the soil from melting and eroding…and might even lock away heat-trapping carbon dioxide.”

As for the Tasmanian tiger: The argument is that returning an apex predator to its habitat can help “rebalance” the ecosystem. More importantly, the same technologies can help save species that are in the danger of disappearing due to global warming. For example: the extinction crisis triggered by the catastrophic wildfires in Australia. One of the lead scientists says:

“We have to look at other technologies and novel ways to do that if we want to stop this biodiversity loss. We have no choice. I mean, it will lead to our own extinction if we lose 50% of biodiversity on Earth in the next 50 to 100 years.”

Quote to note: A leading environmentalist and de-extinction evangelist declared at a TED conference: “Humans have made a huge hole in nature in the last 10,000 years. We have the ability now—and maybe the moral obligation—to repair some of the damage.”

Is any of this true?

There are many de-extinction sceptics in the scientific and environmental community. Some of their biggest worries are as follows:

One: There are no living or preserved cells to create an exact clone of these extinct species. DNA has a half-life of only around 521 years. Even in recently extinct species, the DNA is often fragmented. “And because those fragments are tiny, it’s impossible to actually reassemble them [digitally] like puzzle pieces into the entire picture that they used to be.”

So at best, we will end up with hybrids that “differ in unknown and unpredictable ways from the extinct form.”

Two: It is also impossible to replicate the conditions in which these animals thrived: “The ecosystem, the social structures, and the population diversity of the past do not exist anymore.” Now add in the absence of a learning environment—since there are no parents to teach the babies how to survive. So the effects of introducing these animals into the current environment are also unpredictable and potentially perilous. As one academic paper warned of the woolly mammoth: “Any proxy will be placed in an ecosystem that has either never encountered the extinct species or has not done so for a long time.”

Three: The bigger worry is the opportunity cost of focusing on extinct rather than living animals. A recent study found that if the money put into de-extinction were instead channelled into conservation, roughly two to eight times more species would be saved. As one biologist puts it:

“If that billionaire is only interested in bringing back a species from the dead, power to him or her. However, if that billionaire is couching it in terms of it being a biodiversity conservation, then that's disingenuous. There are plenty of species out there on the verge of extinction now that could be saved with the same resources.”

A good example: are the numbats—the closest living relative of the Tasmanian tiger. There are fewer than 1,000 left in the wild and the species is officially listed as endangered. Would it be better to spend that $15 million saving them—or bringing back a dead species?

Data point to note: Our wildlife population has fallen by two-thirds since 1970—and anywhere between a third and a half of all non-human species will become extinct by 2050.

The bottomline: Even the biggest sceptics don’t entirely oppose de-extinction, and for this reason:

“I’m excited about [de-extinction] and keep talking about it and keep doing interviews about it, not because I think we really are going to get a mammoth—I don’t think we will. But because the path to getting us there is so important for conservation of living species.”

FYI: The San Diego zoo is using techniques very similar to Colossal to save the northern white rhino—of which there are only two females left in the world.

Cnet has the most details about the Tasmanian Tiger revival project. New York Times offers a big picture view of Colossal, its founders and their plans. Public Library of Science’s blog lays out the pros and cons of de-extinction. Quanta Magazine points out that these projects are not resurrecting extinct creatures but creating genetic clones while Scientific American and Science.org argue that de-extinction hurts conservation efforts. Also read: our Big Story about bringing back the woolly mammoth.