My go-to stressbuster these days is our playlist of the best and most chill indie songs. Among them is my personal favourite: Peter Cat Recording Co.’s ‘Floated By’. Check it out here. Also, make sure you send us your recommendation for the ‘dancing in your underwear’ line-up below.

The Aam Aadmi Party scored 134 out of 250 seats in the municipal elections—while the BJP only managed 104, leaving the Congress with a pitiful nine. This ends the saffron party’s 15-year reign—a significant achievement for AAP. More so since the BJP whipped out its biggest ace—PM Modi—in this campaign, as well. What won the day: AAP’s promise to get rid of the mountains of garbage at Delhi’s three landfills.

Still to be decided: The powerful position of the mayor who will be elected by the councillors. In Punjab, the BJP candidate won even though AAP had the most councillors. Indian Express explains why capitalising on the victory will not be easy for AAP.

In other election-related news: Democrats have expanded their Senate majority with the victory of Raphael Warnock in Georgia—who handily beat Herschel Walker in a runoff election. What this means: the more conservative Dems will no longer be able to block legislation as easily. More importantly, it is yet another nail in Donald Trump’s political coffin. Walker—who has been accused of forcing his partners to have abortions, domestic violence and more—was one of Trump’s personal picks. Los Angeles Times has more while ABC News looks at what this majority will mean for the Democrats.

A foiled far-right coup in Germany

Yesterday, security forces arrested 25 people for plotting to overthrow the government. They are members of an extreme far-right organisation that has not been named as yet—and was founded as recently as November 2021. They include a bizarre mix of people including a 71-year-old former royal Heinrich XIII Prince Reusthe.

While there are far-right groups with delusions of grandeur, these arrests are notable for a number of reasons, according to experts. One: “Even if Reich citizens or conspiracy ideologues seem like crazy people, many of those arrested come from the middle of society, have normal jobs, friends and so on.” Two: “Today’s group, however, was larger, further along in the planning and better connected with people trained in the [use of] weapons.” NBC News has the best explainer on the group—and the arrests.

China takes a big step back from zero Covid

Beijing has finally scrapped the most controversial pandemic policies—clearly spelling the demise of its zero Covid policy. The 10 new guidelines include sweeping changes—most notably allowing home quarantine and largely ending the use of mandatory QR codes to enter public places. Lockdowns will also be limited to “high risk” areas. We did a two-part series of China’s strategy—and part two laid out the risks of exiting zero Covid. They have not changed—and include the prospect of soaring cases and deaths, especially of the elderly. CNN has more on the guidelines.

Are all curse words really alike?

A new study found that gaalis even in unrelated languages are alike in surprising ways. Researchers looked for patterns in Hebrew, Hindi, Hungarian, Korean and Russian—asking speakers to list the most vulgar words they could think of. And here’s what they found: All of them lacked the consonant sounds L, R, W and Y. Just as interesting: family-friendly versions of the same words insert these sounds to make them more acceptable—for example, forking for… well.

What this tells us about human language:

A 20th-century linguistic principle held that the sounds of words were arbitrary: Any word could have any meaning. “That’s really supposed to be one of the things that defines language,” [lead author] Dr. Lev-Ari said. With profane words, though, as in other cases of sound symbolism, the sounds themselves seem to carry meaning. “This can shape and change our understanding of how languages are formed,” Dr. Lev-Ari said.

What vastly amused us: The only known exception to this rule so far is French. Read more about the study in the New York Times (paywall) or ScienceAlert.

A link between ultra processed food and dementia

A new JAMA study shows that if ultra-processed foods—ice cream, hot dogs, french fries etc—comprise more than 20% of your daily diet, it significantly increases your risk for dementia. That’s about 400 calories a day in a 2,000-calorie-a-day diet. And just a small McDonald’s order of fries and regular cheeseburger contains 530 calories. There was an accelerated decay of 28% in overall cognitive functions—and 25% in executive functions—i.e our working memory, mental flexibility, and ability to retrieve information.

But here’s the good news:

There was an interesting twist, however. If the quality of the overall diet was high — meaning the person also ate a lot of unprocessed, whole fruits and veggies, whole grains and healthy sources of protein — the association between ultraprocessed foods and cognitive decline disappeared.

Call of duty comes to Nintendo

Microsoft has inked a 10-year agreement to bring the extremely popular first-person shooter series to Nintendo consoles for the very first time. But that depends on whether Microsoft’s $69 billion all-cash acquisition of its developers Activision Blizzard goes through. US agencies may be getting ready to block the sale for violating antitrust laws. CNBC explains why the Nintendo move is designed to put pressure on Sony—which owns Playstation.

On the lists of year-end winners…

One: TIME magazine’s Person of the Year was all too predictable: Volodymyr Zelensky—and the spirit of Ukraine. (TIME) 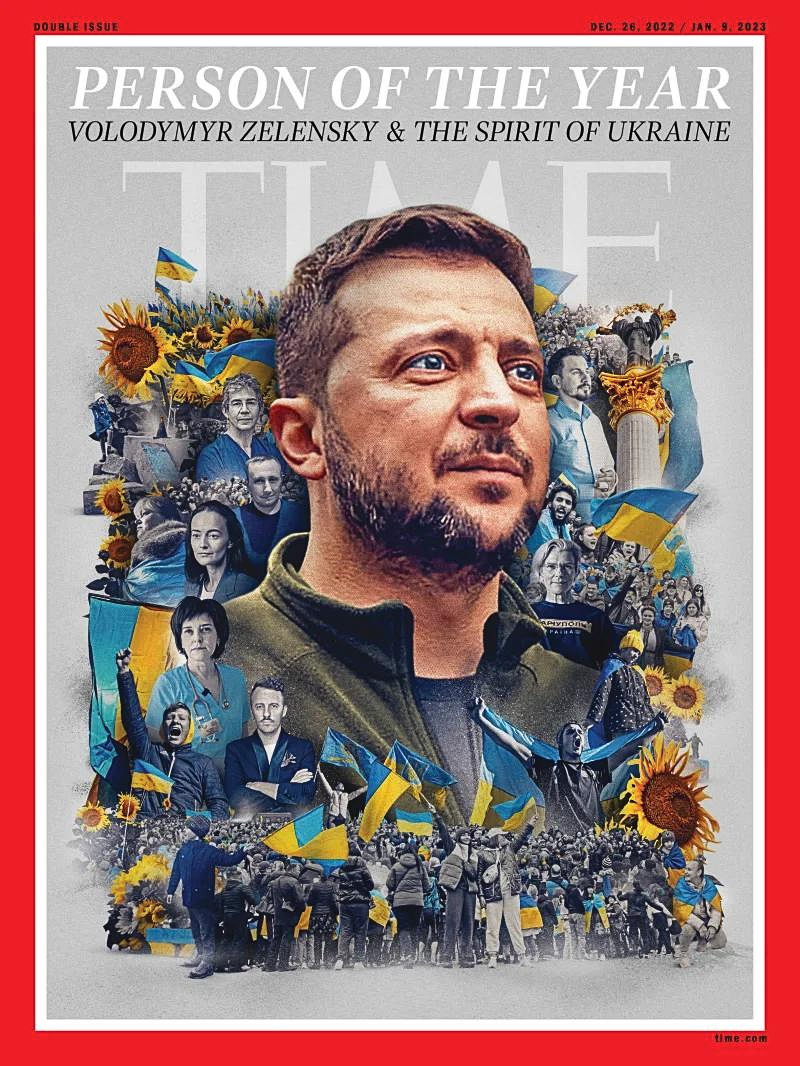 Two: European Commission president Ursula von der Leyen topped Forbes’ list of ‘World’s 100 Most Powerful Women’—for her leadership during the Ukraine war and handling of the pandemic. The line-up includes 39 CEOs, 10 heads of state, and 11 billionaires with a combined net worth of $115 billion. More ordinary yet heroic folks like protesters are represented by Mahsa Amini—whose death triggered the Iranian uprising that has captured global attention. Notable Indians include Finance Minister Nirmala Sitharaman and Nykaa Founder and CEO, Falguni Nayar—who is described as India’s “richest self-made female entrepreneur. “ (Forbes)

Three: Winning the year in Google search: Johnny Depp who is the most looked up actor on the platform—though more for his litigation skills than acting chops. Google’s ‘Year in Search 2022’ also reflects the wild popularity of Wordle in the general category. But here’s the winner that perfectly reflects the inanity of our internet culture:

One of the internet's biggest 2022 debates—"are there more doors or wheels in the world"—ranked as the top trending or searched worldwide. A New Zealand rugby league manager first posed the divisive question in March, asking people on Twitter: "Do you think there are more doors or wheels in the world?" His tweet went viral, and the debate bubbled over to TikTok, where people used #DoorsVsWheels and #wheelsvsdoors hashtags to explain which side they were on.

Most of the top spots in India were grabbed by sporting events like the IPL. Interestingly, the most searched personality was not a celebrity—but ex-BJP spokesperson Nupur Sharma. NBC News has the global deets, while NDTV focuses on India.

Four: Every ten years, the British magazine Sight and Sound releases its list of the ‘Greatest Films of All Time’—after polling “1,600 film critics, academics, distributors, writers, curators, archivists and programers.” This may explain why the winner is  the 1975 film ‘Jeanne Dielman, 23 quai du Commerce, 1080 Bruxelles’—directed by Chantal Akerman. A film so slow that even the Vox critic who praises it says: “I can tell you that it’s long, and for much of its [201-minute] runtime, it’s extremely boring.”

FYI: Akerman’s film toppled the 2012 winner, Alfred Hitchcock’s ‘Vertigo’. Yes, yes, the winner is a  “landmark feminist film” by a woman director—not a white male—and this year’s list is far more diverse. But still, boo! Also: The only Indian on the list is inevitably Satyajit Ray’s ‘Pather Panchali’ at #35. You can see the ‘Jeanne Dielman’ trailer below.  (Smithsonian Magazine)

One of 2022’s biggest losers: is not on any list as yet. But Kanye West’s brand value is so piss-poor right now that a London studio is offering to remove your Ye tats for free. Their mantra: “Yeezy come, yeezy go.” Lol! (CNN)

Ranveer Singh dropped a teaser for a song titled  ‘Current Laga Re’  from his upcoming movie ‘Cirkus’—featuring a special appearance from Deepika Padukone. The song drops today, and the movie hits theatres on December 23. FYI: ‘Cirkus’ is an adaptation of Shakespeare’s ‘The Comedy of Errors’. Here’s the trailer, ICYMI. (NDTV)