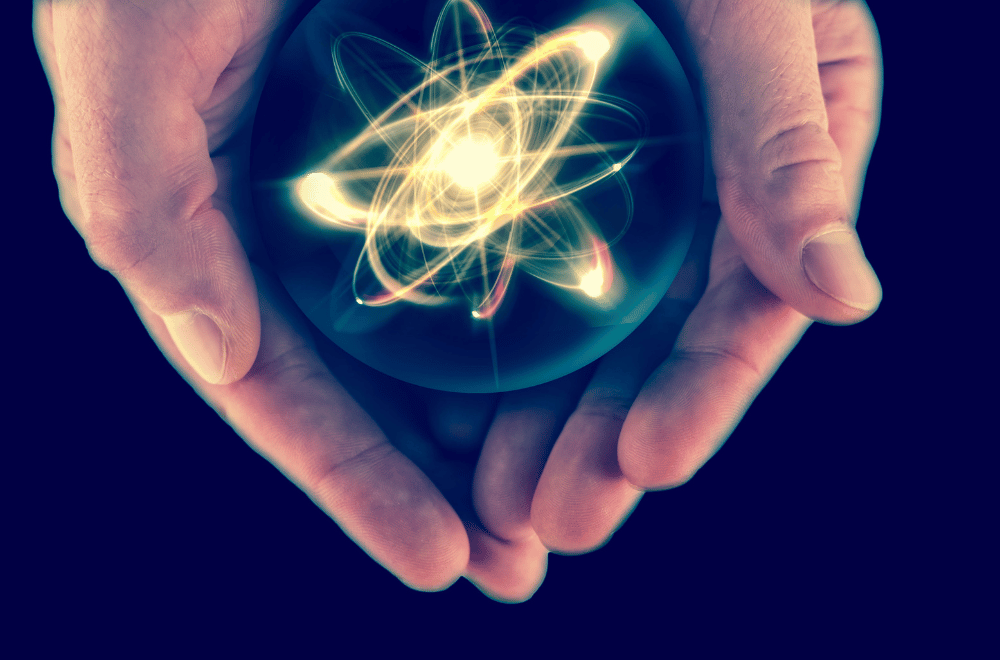 A landmark moment in nuclear fusion

This week, US scientists announced a big breakthrough in nuclear fusion—a form of energy that could potentially save us from catastrophic climate warming. But we didn’t understand what the big fuss was all about—and here’s what we figured out. Yes, this is huge.

First: This is not the same thing as the A-bomb

There are two ways to produce nuclear power. You can either split atoms—which is what is called nuclear fission. Or you can fuse atoms together—hence, nuclear fusion.

Atom bombs: involve nuclear fission. They take a larger atom and split them into two smaller ones. The atomic bombs that obliterated Nagasaki and Hiroshima used nuclear fission:

Due to its long, thin shape, the Hiroshima bomb was called ‘Little Boy’. The material used was uranium 235. It is believed that the fission of slightly less than one kilogram of uranium 235 released energy equivalent to approximately 15,000 tons of TNT.

Nuclear reactors: The heat generated from splitting atoms also produces electricity—offering an alternative source of energy—as in a nuclear reactor:

A nuclear reactor is driven by the splitting of atoms… where a particle (a ‘neutron’) is fired at an atom, which then fissions into two smaller atoms and some additional neutrons. Some of the neutrons that are released then hit other atoms, causing them to fission too and release more neutrons. This is called a chain reaction.

The large amount of heat generated by this chain reaction is removed using a circulating liquid—most often, water. This heat is used to generate steam, which drives turbines that produce electricity.

Physics 101 refresher: Neutrons are uncharged particles found within the nucleus of an atom. They are slightly larger in mass than protons.

The upside of fission: Nuclear reactors generate a steady supply of electricity round-the-clock for months at a stretch, sometimes even years—without requiring refuelling. Nuclear fission is also ‘clean’ as it generates zero emissions.

The key downside: The process produces volatile radioactive waste that poses serious safety risks. And meltdowns at these reactors have proved catastrophic in the past. See: Chernobyl in 1986 and Fukushima in 2011. Fierce resistance to such reactors—including in Kudankulam, Tamil Nadu—are fueled by valid fears over their safety and impact on the environment.

Next: A quick intro to nuclear fusion

Ever since scientists discovered that energy can be generated by splitting atoms, they have been trying to do the same by fusing them together. And that’s because our entire universe runs on nuclear fusion—including our planet.

Power of the universe: The immense gravity of stars, including the sun, smashes atoms of hydrogen together to produce helium—and in the process generates sunlight and warmth all living beings rely on: “In the case of the sun, its intense heat — millions of degrees Celsius — and the pressure exerted by its gravity allow atoms that would otherwise repel each other to fuse.”

How it works in a bomb: The process uses two isotopes of hydrogen–deuterium and tritium. Reminder: Isotopes of an element share the same number of protons but a different number of neutrons. Hydrogen bombs fuse together deuterium and tritium to form heavier helium atoms. These are far more destructive than their atomic cousins. The first hydrogen bomb was exploded by the US in 1952 on the small island of Eniwetok in the Marshall Islands—producing a light brighter than a thousand suns and a heatwave felt 50 kilometres away. In 1953, the Russian followed suit.

But, but, but: Using nuclear fusion to create massive explosions was the easy bit. It proved far more difficult to generate a stable energy source to run a power plant: “The process of fusing atoms together takes an enormous amount of energy, both to achieve the reaction and contain it.”

The importance of ‘ignition’: The biggest challenge was creating a nuclear reaction that produces more energy than it consumes—i.e its output is larger than its input. This is called achieving ignition—a critical threshold for any viable source of energy.

The landmark fusion experiment: was conducted by scientists at the US National Ignition Facility (NIF)—the largest in the world. This is what they did:

The big result: This marked the first nuclear fusion experiment to achieve ignition:

In a brief moment lasting less than 100 trillionths of a second, 2.05 megajoules of energy — roughly the equivalent of a pound of TNT — bombarded the hydrogen pellet. Out flowed a flood of neutron particles — the product of fusion — which carried about 3 megajoules of energy, a factor of 1.5 in energy gain.

The energy output was roughly 54% higher than the input. What was different this time:

This had all happened before – 100 times before – but last week for the first time they designed this experiment so that the fusion fuel stayed hot enough, dense enough and round enough for long enough that it ignited. And it produced more energy than the lasers had deposited.

But, but, but: The energy produced was about enough to boil 10 kettles of water.

Point to note: NIF is not the only player in the nuclear fusion game. ITER is the result of a $22-billion collaboration among China, European Union, India, Japan, Korea, Russia and the United States. It too is aimed at achieving “self-sustaining fusion.”

The biggest reason is that it releases zero radioactive waste. Just that single advantage offers the potential of vast sources of green nuclear energy without its perils.

The deuterium from a glass of water, with a little tritium added, could power a house for a year. Tritium is rarer and more challenging to obtain, although it can be synthetically made. “Unlike coal, you only need a small amount of hydrogen, and it is the most abundant thing found in the universe,” [says] Julio Friedmann, chief scientist at Carbon Direct…“Hydrogen is found in water so the stuff that generates this energy is wildly unlimited and it is clean.”

The promise of saving the planet: If the technology can be made commercially viable, it offers an urgently needed solution for global warming: “If harnessed, it could produce nearly limitless, carbon-free energy to supply humanity’s electricity needs without raising global temperatures and worsening climate change.” We may not be able to cool the planet, but we can hope to limit warming to 2°C—or the more ambitious target of 1.5°C of warming.

But, but, but: Replicating this experiment at scale will not be easy, as experts point out:

It’s even harder to produce electricity in a power plant. For example, the lab’s lasers can only fire a few times a day. To viably produce energy, they would need to fire rapidly and capsules would need to be inserted multiple times a minute, or even faster.

And there’s the inconvenient fact that lasers themselves guzzle electrical energy—which prevents them from being cost-effective.

All the NIF experiment has done is prove that ignition is possible: “This is very important because from an energy perspective, it can’t be an energy source if you’re not getting out more energy than you’re putting in.” In other words, ignition is necessary but not sufficient to make the nuclear fusion dream come true. As one expert puts it, “This is the difference between lighting a match and building a gas turbine.”

The bottomline: Yes, we are miles away from achieving the dream of an emission- and waste-free source of energy. But every long journey begins with that first step.

Washington Post (splainer gift link) has a good explainer, while CNN offers a solid overview. Nature is best—if nerdier—on the importance of achieving ignition. Associated Press explains the implications for generating clean energy. If you need it, here is a guide to nuclear reactors.