The country exploded in a fresh round of angry protests—with mobs invading the Prime Minister Ranil Wickremesinghe’s office. They were angry at Wickremesinghe taking over as the acting president—after Gotabaya Rajapaksa fled the country to Maldives. One of them said: “We need both ... to go home. Ranil couldn’t deliver what he promised during his two months, so he should quit. All Ranil did was try to protect the Rajapaksas.” See the chaotic scene below:

Where we are now: Wickremesinghe has declared a state of emergency—and added in a televised statement that he will not step down until a new government is in place. FYI: Rajapaksa has not formally resigned as yet. But the parliament is slated to pick a new president on July 20—who will serve out the rest of his term and potentially pick a new PM.

A good read: New York Times (splainer gift link) offers the best analysis of what is likely to happen in the SL parliament. For a detailed explanation on the crisis, read our Big Story.

Since 2020, the actor has been the focus of multiple investigations by multiple central agencies—which have accused her of everything from abetting suicide to financial fraud. The Narcotics Control Bureau has finally framed charges against her for the following crime:

Now, the basic charge of possessing “small quantities” of marijuana is illegal—but is not serious, carrying a one-year jail term. More notably, she is also charged with “financing” drug traffic—which carries a minimum 10-year sentence. But the Bombay High Court has already declared that this charge cannot apply in this case—while granting Chakraborty bail. The Quint has more on that angle.

Gene-edited liver: Researchers have injected gene-editing serum into a patient’s liver to lower their cholesterol—in the first human trial of its kind. The serum will modify a single letter of DNA in the patient’s liver cells. If it works, then these genetic edits will be able to permanently lower levels of “bad” LDL cholesterol—the excess of which can lead to clogged arteries. Why this is a big deal: “If this works and is safe, this is the answer to heart attack—this is the cure.” Existing treatments—like strict diets, medicines, injections—are either hard to stick to or have significant side effects.Testing on monkeys has already yielded encouraging results. (MIT Technology Review)

Pig heart transplants: Doctors have now implanted pig hearts in two brain-dead patients—after a recent transplant in a living person failed. The aim here is not to save but to learn and improve: “Brain-dead patients can be used to gather information not safely collected on the living and offer doctors an opportunity to practice before implanting gene-edited pig organs into live people.” The hearts were doing well after 72 hours. (USA Today)

Pelvic mesh: US company Boston Scientific doled out $105 million in a settlement deal with women whose bodies and lives have been devastated by its pelvic mesh. This is a transvaginal mesh inserted to treat pelvic prolapse and stress urinary incontinence—which is a common effect of childbirth. But these surgeries instead turned into living nightmares for patients: “For many women, the devices had catastrophic impacts. Women were left in severe and chronic pain; the mesh caused infections and complications, and was near-impossible to remove.” FYI: In 2021, Boston Scientific paid out $188.6 million for similar issues with the mesh—but has failed to acknowledge that its product has a problem. You can get more context on this ongoing gynaecological scandal here. (The Guardian)

Speaking of gender issues: India is ranked #135 out of 146 countries in this year’s Global Gender Gap Index. And we are at rock-bottom in the area of “health and survival.” The accompanying report also shows that the world will now take 132 years to reach gender equality—but South Asia will need another 197 years to achieve the same! The Hindu has more on the results.

The former Chancellor is the frontrunner after the first round of voting among Tory MPs. He got 88 votes, while Trade Minister Penny Mordaunt is second with 67—and Foreign Secretary Liz Truss has 50. Already out: Chancellor Nadhim Zahawi and former health secretary Jeremy Hunt—leaving six in the fray. The contest will narrow to just two candidates by next week. BBC News has more on the possible twists and turns ahead.

Speaking of the UK: If you’re wondering why the nation seems to have lost direction, here’s one possible answer:) According to a new survey, three-quarters of all adults can’t make sense of a map—or read basic symbols. Another 56% admitted getting lost because they can’t use a map or follow a phone app correctly. To find their way, 39% called friends and family, 26% flagged down help, and 10% called mountain rescue to get home. (The Guardian)

One: Two media outlets—the Austin American-Statesman and KVUE—have published CCTV video of the police response to the Uvalde shootings. Reminder: 19 children and two teachers were killed by a lone gunman in Texas in May. What it shows:

“[D]ozens of sworn officers, local, state and federal—heavily armed, clad in body armor, with helmets, some with protective shields—walking back and forth in the hallway, some leaving the camera frame and then reappearing, others training their weapons toward the classroom, talking, making cellphone calls, sending texts and looking at floor plans, but not entering or attempting to enter the classrooms.”

Two: Buried in the flurry of images released by NASA are two fabulous photos of Jupiter—taken by the James Webb Space Telescope. Taken while its scientific instruments were being tested, they show the planet, its ring and three of its moons. (New Scientist) 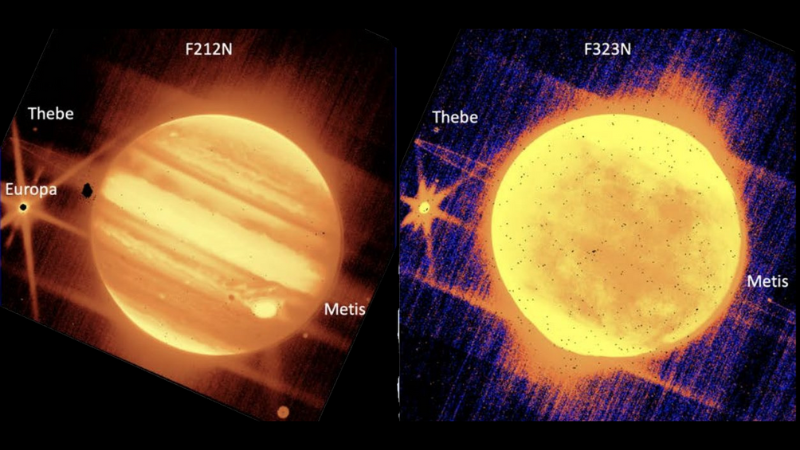