A big investigation into Uber

The Guardian, Le Monde and other global media outlets have accessed a leaked trove of 124,000 documents—spanning from 2013 to 2017—when Travis Kalanick was in charge. It shows the powerful influence exercised by Kalanick on heads of state—including French PM Emannuel Macron. The executives encouraged their drivers to risk their lives by participating in protests:

“Driver victims were encouraged to file police reports... They ‘will be published without our fingerprint on the front page tomorrow’, one manager wrote. ‘We keep the violence narrative going for a few days, before we offer the solution.’”

And in email and phone messages, Uber executives made it clear that they knew they were breaking the law in multiple countries: "sometimes we have problems because, well, we’re just f***ing illegal.” You can read the rest of the details over at The Guardian.

As for India: Indian Express was also given access to the documents. It uncovered Uber’s PR strategy in the aftermath of a rape case—where a driver assaulted a passenger in 2014. The company internally blamed weak background checks in India for the incident—which isn’t exactly shocking.

Far more notable: The newspaper’s separate investigation into ‘panic buttons’ on the Uber app. Out of 50 rides, the feature was not available in 29 rides—and only seven had active panic buttons. In five out of these seven rides, “pressing the button did not result in follow-up action from the Delhi Police despite a wait of 20 minutes.” (Indian Express)

Also a key investigative story: Back in December, an army operation in Nagaland went terribly wrong when soldiers shot and killed six civilians—who they mistook for extremists. More people died in a clash with the troops when villagers rose in anger. A six-month long investigation by the state government has revealed this:

“For at least 50 long minutes, the team commander of an army major rank… allegedly knew that the ambush laid by his team was on the wrong route. The officer, however, allegedly ‘wilfully suppressed’ this crucial information and instead, knowingly directed the 29 army personnel of the sophisticated Alpha team of 21 Para Special Forces in the wrong direction.”

You can read the details over at The Wire—which gained access to the chargesheet framed by the Special Investigation Team. Also read: Our Big Story on the Nagaland killings.

The assasination of Shinzo Abe: A quick catch up

The former Japanese Prime Minister was shot dead on Friday. If you need a quick catch up, here’s what happened:

Video clips of note: You can watch the moment he was shot, and the aftermath, when paramedics worked to save him.

More on Abe: Abe was Japan’s longest-serving prime minister, having held office for about a year in 2006 and then again from 2012 to 2020. He stepped down in 2020 due to health reasons. He was both charismatic and controversial—a hardline nationalist who lobbied for a more aggressive Japan—which has a pacifist constitution that shuns any kind of military posturing. New York magazine has an excellent profile of his mixed legacy. Al Jazeera looks at Abenomics—an aggressive strategy to pull Japan out of its economic doldrums.

The election: Abe’s death gave the conservative coalition government a big boost in the upper house election. It's on track to win 69 to 83 of the 125 seats. (Reuters via The Telegraph)

Hours after the Supreme Court granted the Alt News founder interim bail in one UP case, he was slapped with another warrant in a different part of the state. This one is based on a complaint by a Sudarshan TV employee—and it’s once again about a tweet. Back in May 2021, Mohammed fact-checked an image aired on the channel:

“RW propaganda channel @SudarshanNewsTV has used a pic of Al Masjid an Nabawi from Madina, superimposed it with an old pic from Ghaza, with graphics bombing the Mosque. Is this reporting or trying to incite violence. Hope @Uppolice @noidapolice @dgpup takes action.”

The complaint was actually filed last year—after appealing to a local court when the police refused to file an FIR. The police have now suddenly lurched into action.

Also notable: Both the Delhi and UP police have admitted in court that they have been altering the charges after the FIR was filed—adding and deleting relevant sections of the penal code when questioned by the defence lawyers. The Hindu has more. If you need a refresher or more context, check out our Big Story on Mohammed’s arrest.

Also in big trouble: Amnesty India. The Enforcement Directorate slapped a penalty of Rs 51 crores on the organisation—and an additional Rs 10 crores on its former head Aakar Patel. The crime: violating foreign exchange regulations. Our previous Big Story laid out the details of the allegations—but in the context of the government’s broader crackdown on foreign funding for NGOs. (The Hindu)

In a regulatory filing, Musk said he wants to terminate the $44 billion deal to buy the company. His reasons remain the same: Twitter did not give him full or accurate data on spam bots on its platform. Musk also claims he does not have to pay the $1 billion termination fee—since the company made “material changes” to the business—such as laying off staff and imposing a hiring freeze—without his consent. Twitter’s response: we’ll see you in court in Delaware! Axios has a detailed breakdown—including a map of possible outcomes. Bloomberg News explains why Twitter now only has bad options. Fortune’s theory is that this was all an elaborate ruse to sell Tesla stock. Irony alert: in the midst of all this, Donald Trump suddenly lashed out at Musk calling him a “bulls**t artist” lol!

Working out: New research reveals that people who work out only on weekends reap the same benefits as those who exercise on a regular basis. There’s a catch: You must get in 150 minutes of activity per week, however you do it. Why this is good news: most of us have crazy weekday schedules and working out often means sacrificing on equally valuable sleep or family time. (Yahoo News)

Keto vs Mediterranean: A study compared the two diets—and found that they mostly offered the same benefits in terms of blood glucose and weight loss. But there was one key difference: Keto increased the amount of bad cholesterol by 10%—while mediterranean lowered it by 5%. Why this matters: “The difference between the two diets is quite large, and this may have long-term consequences on cardiovascular disease.” (CNN)

A man and woman dressed as Shiva and Parvati acted in a street play—protesting against rising prices of food and fuel in Assam. Hindu organisations like the Vishwa Hindu Parishad, and Bajrang Dal were enraged—and the man was arrested, while the police are still looking for the woman. The only silver lining: Assam CM Himanta Biswa Sarma later tweeted: “Nukad Natak on current issues is not blasphemous. Dressing up is not a crime unless offensive material is said. Appropriate order has been issued to @nagaonpolice.” (Scroll) 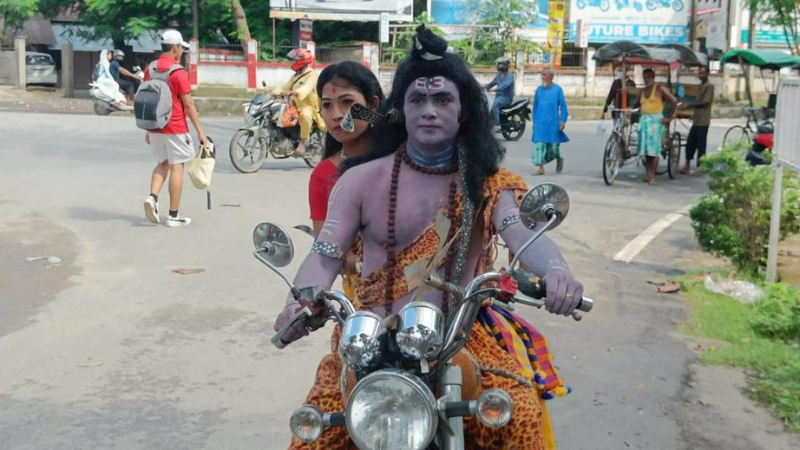