Independence Day: a quick round up

TV channels and newspapers already had the main highlights covered over the weekend. Here are some other moments from the big 75th anniversary celebration that may have slipped your attention:

One: We’re not sure what is more amusing—Mamata Banerjee’s version of shaking a leg at a tribal dance or the commentator who sounds more lively than she looks.

Two: As expected, Jawaharlal Nehru was both fondly remembered—and entirely ignored. He was missing from this commemorative leaflet created by the Karnataka government: 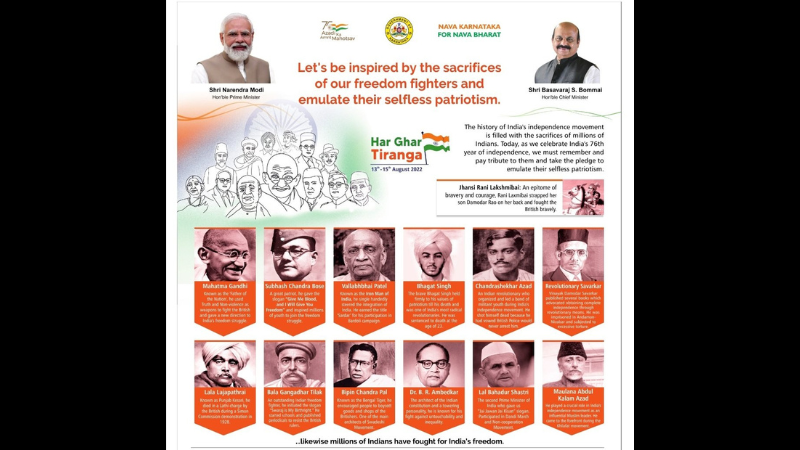 OTOH:  BBC Archives shared a video of Nehru’s first interview in 1953 with the network—because someone has to remember Pandit-ji.

Three: What is I-Day without us Indians slaughtering our lovely anthem? But no one did it with more enthusiasm and charm than this little munchkin:

Also this: We didn’t hear much about the Pakistanis—who marked their 75th anniversary, as well. But here’s a lovely rendition of ‘Jana Gana Mana’ on the rabab by Pakistani artiste Siyal Khan.

Good related reads: There was plenty of ink spilled on how far we have travelled—or not—in the past 75 years. Here are some pieces that caught our eye:

Other key stories from the long weekend…

One: Former US President Donald Trump may be in big trouble because he took highly confidential documents out of the White House—to his home in Mar-a-Lago, Florida. Maybe he forgot to return them—or to tell the authorities about them when the Justice Department came looking. Now, we have 11 boxes with lots of stuff that could put him in great legal jeopardy, which is not exactly a new thing. In any case, Wall Street Journal (splainer gift link) has the best analysis of the developments, and their implications.

Two: India Inc was rocked by the death of Rakesh Jhunjhunwala—the stock market genius nicknamed the Warren Buffet of Dalal Street. He also was the man behind the recently launched new airline Akasa Air. Moneycontrol has tributes to the billionaire from market experts, Outlook looks at the future of Akasa Air. Economic Times and Forbes profile the Big Bull. (Associated Press via NPR)

The international governing body has suspended the All India Football Federation (AIFF) with immediate effect. The reason: “undue influence from third parties”—in this case, the Supreme Court. The Indian football federation has been in chaos after its previous chief Praful Patel held on to his post and kept delaying elections. AIFF then agreed to a roadmap in consultation with FIFA to reform its statutes and hold elections by October. The problem: in May, the Court disbanded AIFF and appointed a three-member committee to govern the sport, which is a big no-no for FIFA. So AIFF will remain suspended until this committee is in charge. Why this matters: the highly anticipated under-17 Women’s World Cup slated to be held in India is cancelled. And the Indian Super League teams that are set to compete in FIFA-governed tournaments will also be banned from participating in them. (Deutsche Welle)

Students of the Kolkata university have come out in solidarity with the professor—who was forced to resign by the administration because of private Insta photos of her in a swimsuit, shorts etc. (See: our Big Story here). Her woes began when the Vice Chancellor claimed to have received a complaint from the father of a student, who allegedly complained about the “sexually explicit, borderline nudity” content of these photos. But according to a Wire investigation, this ‘father’ and his son may not exist. And the complaint may be entirely fabricated—especially since the university has never been forthcoming about the details. Read how The Wire tried to track down this outraged and perhaps non-existent parent.

Apple cracks down on casteism

According to a Reuters exclusive, the big tech company quietly updated its employee conduct policy two years ago—to “explicitly prohibit discrimination on the basis of caste, which it added alongside existing categories such as race, religion, gender, age and ancestry.” The policy change was likely a response to a big caste discrimination case filed against Cisco Systems back in 2020 (See: our Big Story). Why this is notable: the Apple policy goes beyond US discrimination laws, which do not explicitly ban casteism. (Reuters)

Warning: Not all of them are pleasant. Sorry!

One: The European river Oder—which runs through Poland and Germany—is experiencing a horrifying mass die-off of fish. The culprit is not the exceptional hot summer but some “unknown, highly toxic substance.” Polish Prime Minister Mateusz Morawiecki warned that the waterway would take years to return to normal: “The scale of this pollution is very big. So big that the Oder may take years to return to a fairly normal state.” The clip below sums up the extent of this catastrophe. (CNN)

Two: This one is even more heart-breaking because it pretty much sums up the selfishness of humans. Norwegian authorities euthanised the wildly popular 1,300-pound walrus named Freya—who was hanging out on the docks and attracting massive crowds and global headlines. In the end, her fame proved to be a death warrant. Lots of people were “swimming with Freya, throwing objects at her, and getting dangerously close to her to take photos”—all of which made her a danger to humans since female walruses weigh between 600 and 900 kilograms: “We have great regard for animal welfare, but human life and safety must take precedence.” FYI: some animal activists say this was a hasty and wrong decision. (CNN)

Three: Ok, this one is a more upbeat story about gorillas in an Atlanta zoo who use a special call to summon their caregivers: “a special vocalisation—something between a cough and a sneeze—to get the attention of zookeepers when they’re hungry.” Apparently, this “snoughing” never happens with gorillas in the wild or even among these gorillas when they are communicating with each other. (Gizmodo)

One: It isn’t all that unusual to see rival teams brawling on the football field—especially when the game pits two bitter rivals like Chelsea and Tottenham Spurs against each other. But the 2-2 draw on Sunday ended in this bizarre ‘handshake’ wrestling moment between the coaches—Antonio Conte and Thomas Tuchel—which earned both of them a red card. Tuchel is also under investigation for comments slamming the referee Anthony Taylor for his decisions. (Associated Press)

Two: There’s a new dino in town. It is small but built literally like a tank. The armoured Jakapil kaniukura was only five-feet-long and weighed nine to 15 pounds—and lived roughly between 145.5 and 65.5 million years ago. Think of it as a well-fortified cat—that some are calling “adorable.” Waiting for it to show up in the next ‘Jurassic Park’ spinoff. The discovery was published in Nature or read the summary in Popular Science. If nothing else, watch the brilliantly recreated animation below.