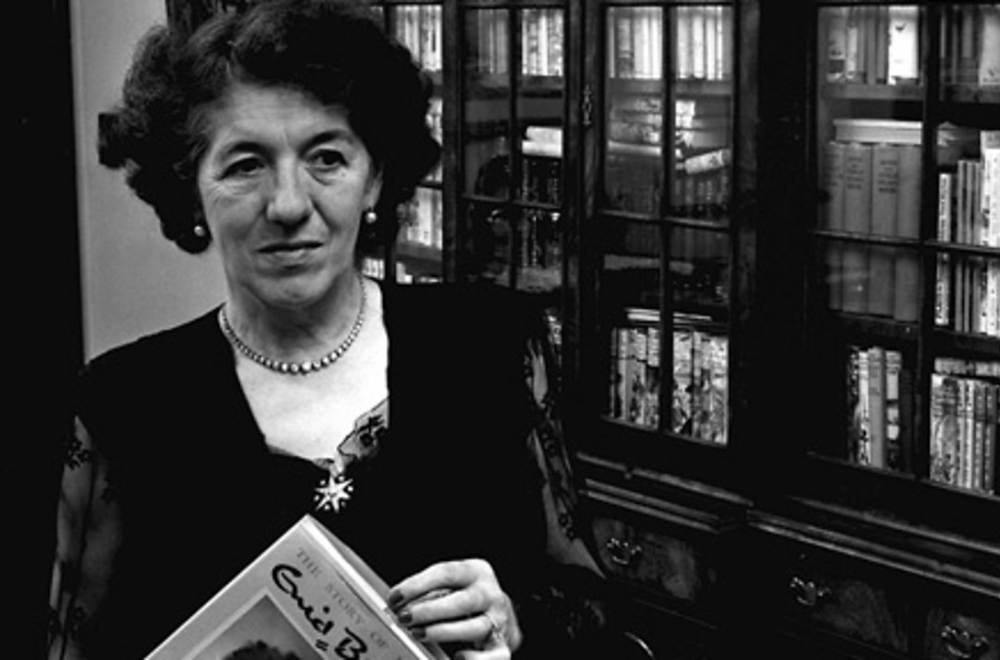 Yesterday, August 11, marked the 125th birth anniversary of the children’s book author. She continues to captivate new generations of Indian children even though her legacy in the West now stands tarnished.

A brief personal bio: Enid Mary Blyton was born on August 11 1897 in South London. She trained as a teacher, and worked as a governess. Her first book was a volume of poetry titled ‘Child Whispers’, published in 1922. Her career soared after she married book editor Hugh Pollock—with whom she had two daughters.

Blyton divorced him in 1942 and married a surgeon, Kenneth Waters, the next year. By the late 1950s, her health began to deteriorate—and she suffered from pre-senile dementia in the last decade of her life. Blyton died in 1968 at the age of 71.

Mean mommy? As Britain’s cherished children’s author, Blyton had a carefully cultivated image as a devoted mother, which was the stuff of PR clips such as these:

In interviews given to The Age, her two daughters—Gillian and Imogen—offered startlingly different versions of Blyton. Where Gillian describes her as “a fair and loving mother, and a fascinating companion,” Imogen says:

"The truth is Enid Blyton was arrogant, insecure, pretentious, very skilled at putting difficult or unpleasant things out of her mind, and without a trace of maternal instinct. As a child, I viewed her as a rather strict authority. As an adult I pitied her."

Irony alert! What the two siblings do agree on: Blyton despised her own mother—a “deeply conventional and obsessively house-proud” woman. It may explain why she was never a conventional mother—and instead a busy, career woman with little time for domesticity. And yet her books reflected her mother’s worldview—“where fathers fulminate in studies, mothers serve up tea, and tomboy George [in ‘Famous Five’] must learn she will never be as good as a real boy.”

A dizzying, neverending success: What is inarguable is Blyton’s literary success—which remains unmatched by any children’s author. She wrote 700 novels and 2000 short stories, which have been translated into 40 languages and have sold over 600 million copies to date. She also penned more than 40 books of religion including the Enid Blyton Bible series.

India has remained one of her biggest and most loyal markets even today, notes the head of Hachette India:

"She's still the third largest-selling children's author in India in any present year after recent sensations JK Rowling, and Jeff Kinney. But if you were to consider her sales across all her books from over 70 years, I'm pretty certain she would probably be the largest-selling author, period. Because even today, her top series Famous Five [which celebrates its 80th birthday this year] sells over 250,000 copies, with the Secret Seven topping 100,000 copies year on year."

The Blyton formula: Her children’s books fulfil the great and enduring fantasy of a world unhampered by adults—and follow three basic templates:

“One involves ordinary children in extraordinary situations; having adventures, solving crimes, or otherwise finding themselves in unusual circumstances…The second type is the boarding school story; the plots of these are usually less extraordinary…This is the world of the midnight feast, the practical joke, and the social interaction of the various types of character that can be found at school…The third type is the fantastical. Children are typically transported into a magical world in which they meet fairies, goblins, elves, or other fantastical creatures.”

The artwork: Of course, Blyton’s success was vastly helped by the artwork that often accompanied her books—especially for younger children. For example, the Noddy series—which brought her great fame and later, infamy—was brought to life by the illustrations of Dutch artist Harmsen Van der Beek: 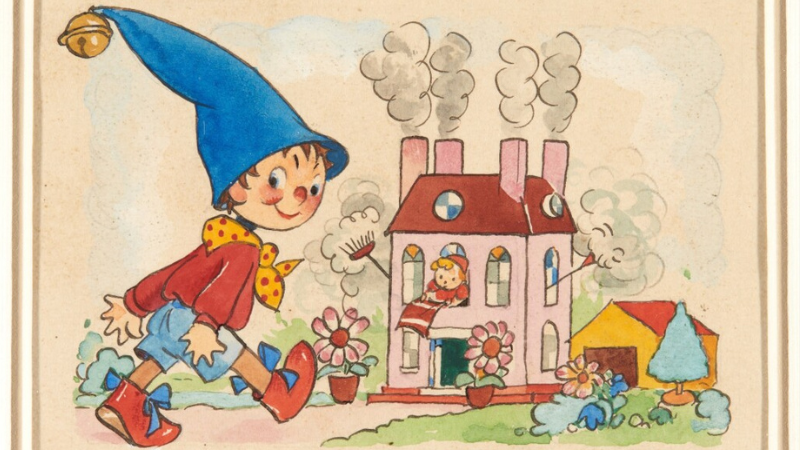 And there’s Ellen Soper who did the book covers for the entire Famous Five series—and forever coloured how we remember the likes of Julian, George and Ann. 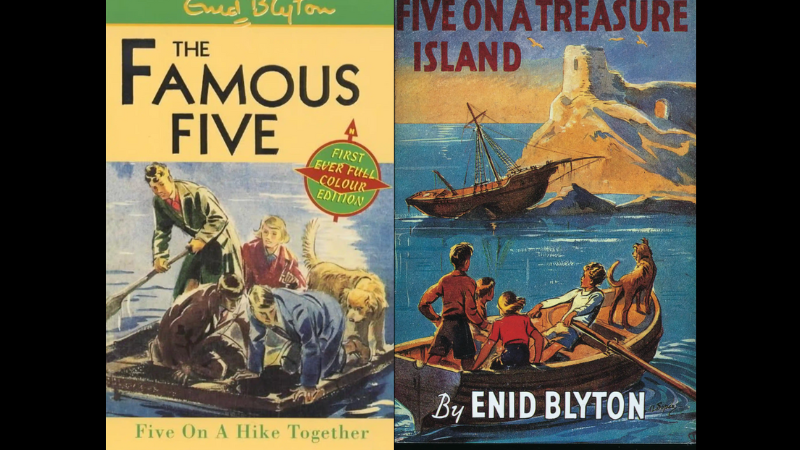 Voted Britain’s most beloved author in 2008, Blyton’s reputation was in tatters by 2019—when The Royal Mint cancelled plans to put her face on the 50p coin to commemorate her 50th death anniversary. The reason: the advisory committee feared a backlash over her politics—with one member describing her behind closed doors as “a racist, sexist, homophobe and not a very well-regarded writer.”

Also this: In 2020—at the height of the Black Lives Matter movement—protests targeted ‘blue plaques’—installed at locations that marked the lives of noted figures in British history. In 2021, English Heritage—which oversees the plaques—updated its description of Blyton’s iconic plaque—positioned on the front of the house she lived in between 1920-1924. It now includes the following lines:

“Others took exception to what they perceived as social snobbery, racism and sexism embedded in Blyton’s storylines. In 1960 the publisher Macmillan refused to publish her story ‘The Mystery That Never Was’ for what it called its ‘faint but unattractive touch of old-fashioned xenophobia’.”

Blyton reimagined: While no one has cancelled Blyton, newer editions of her books have been scrubbed of the most offensive content—for example, replacing golliwogs with goblins. More amusing are the reinterpretations of her work. For example, the parody Famous Five series by Bruno Vincent—whose titles include ‘Five on Brexit Island’, ‘Five Give Up the Booze’, ‘Five Go Gluten Free’ and ‘Five Go Parenting’.

Here’s a taste of the ‘gluten-free’ adventure of the Famous Five as adults:

“[The gang] are all feeling really rather rum, and it’s been going on for days. Nothing seems to work, and with their doctors mystified, they’re driven to trying out various expedients to cure themselves. Julian goes online to self-diagnose that he’s got pancreatic cancer, bird flu and Creutzfeldt-Jakob disease. Anne decides that the old methods are the best and decides to have herself exorcised—which proves to be an awful lot of bother for everyone, and such a mess. Dick goes to a witch doctor who calls himself a ‘homeopath’ (‘sounds only one short of sociopath, Dick!’) but it’s George who discovers they need to go on an exclusion diet, so they enter a world of hard-to-find, maddeningly expensive specialist foods…”

Another adult parody is this short film titled ‘Five Go Mad in Dorset’:

India hearts Blyton forevah: All the brouhaha in Britain has done little to dent Blyton’s fan base in India—which typically includes everyone and their grandmother (literally). Today, 800 Blyton titles have been translated into 90 languages—but she remains the most popular in English:

"Apart from the clean, wholesome, value-educating appeal… her enduring popularity here is threefold: first there's nostalgia as most parents start their kids off on Blyton reliving their own childhoods, then there's the storytelling itself, from mystery and adventure to food feasts, and thirdly she's of course still seen as one of the best English tutors in the world, and in India that's key to getting ahead."

As for Indian kids, Blyton books offer respite of a very specific (and precious) kind:

“She provided us with an escape hatch from our humdrum sweaty lives with hair checks and shoe checks at school. Her Julians and Annes did not have mathematics tutors and science tutors. They didn’t have to go to drawing class on the weekends. They had what was expressly forbidden to us—adventures without grown-up supervision!”

New Blyton for a new generation? Of course, as Sandip Roy acknowledges, older Indians were blissfully—or wilfully—unaware of the ugly racial politics:

“If her books had brown and Indian characters, we would have perhaps been more aware of the racist undertones. In India [at the time], we were hardly aware of race politics and thought nothing of the lily-white nature of our books.”

But that kind of cluelessness is less likely now. This may be why Hachette has commissioned British Indian author Sufiya Ahmed to pen a more inclusive reboot of the Famous Five series—which is far more diverse. The second in the series includes introduces a South Asian girl Simi—who is featured on the cover: 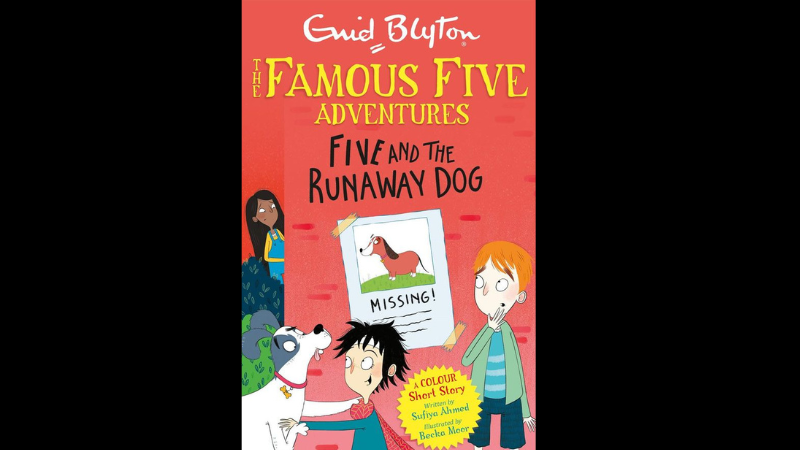 The bottomline: is best summed up by Roy–who says post-colonial Indians have learned to take what they need from British culture, and dismiss the rest:

“The racism, xenophobia and monochrome whiteness are real but so is the magic. One does not have to negate the other or spoil the entire adventure. Instead we should just remember what one of the lands on top of the Faraway Tree was called —Take-What-You-Want. And the rest can just ‘clear orf’.”

For the most comprehensive biography, you can’t do better than Blyton’s own website. Washington Post offers a good overview of the racism debate. The Age report is a must-read for the astonishingly different views of Blyton’s daughters. The Guardian has a lovely gallery of Enid Blyton covers—and a feature on the Famous Five spoofs. Though we may be a little biased in this matter, splainer contributor Sandip Roy has the best—and most amusing—take on Blyton in India: Read his Mint and Times of India columns. Last but not least, BBC News has a long reported piece on India’s love affair with Blyton.