A big win for the BCCI

The Supreme Court delivered a key ruling getting rid of the “cooling off” period on members of India’s top cricket board. As part of the reforms instituted by the Court-appointed Lodha Committee, office-bearers who had served six consecutive years at a state or national body had to step down—and take a three-year break. If enforced, President Sourav Ganguly and Secretary Jay Shah should have stepped down in 2020. But the BCCI moved the Court to approve an amended constitution, which does away with this rule.

“For cricket administrators, the cooling-off clause was like a snow mountain, which they find very difficult to navigate, so they just wait for the weather to change. This is how it has been happening since 2016, 2018 and now 2022.”

He also pointed out: “If you give a long tenure, it is bound to create a monopoly in favour of a few individuals. It is founded on a well accepted principle of governance in almost all fields, and sports is one of them.” Ganguly and Shah can now stay at their jobs until 2025. The Telegraph has more details on the ruling. Indian Express looks at whether Jay Shah will become board president.

Two Dalit teenagers—aged 17 and 15—were found hanging from a tree in Lakhimpur Kheri, Uttar Pradesh. The family says they were abducted by three men on a motorcycle—and their bodies were discovered three hours later. No FIR has been registered yet as the police insist that the family has not filed a complaint. And they have been quick to seemingly rule out rape:

“Lakhimpur Kheri Circle Officer Subodh Kumar Jaiswal said the clothes on victim sisters’ bodies were intact. Except for the necks, there was no injury mark on any other part of the bodies, said a police officer who didn’t want to be identified.”

There have been angry protests—and local authorities have promised immediate action. Reminder: two Dalit girls were found dead in a similar manner in 2014 in Badaun, UP—and became the subject of the film ‘Article 15’. Lakhimpur Kheri’s other claim to fame: this is where the son of the local MLA and cabinet member Ajay Mishra Teni ran over farmers during a protest in 2021. (Indian Express)

“[W]e are deeply saddened to inform you that the current subtitles published on Netflix are a substantially edited, watered-down, butchered version of our work. Several nuances we included in the subtitles are missing. Especially the songs! They’ve heavily toned down the songs’ subtitles to their literal meanings and made them soulless.”

This is not the first complaint about how Netflix alters English subtitles. Last year, another writer accused Netflix of “replacing my contextual subs with plain translations ‘acceptable’ to them” for another Malayalam film.

Why this is happening: Netflix typically outsources its subtitle work to vendors—who may be responsible for the changes. But it is more likely that ‘Indian English’ used by the subtitle writers is being rejected by the company—whose guidelines state:

“We may reject a file for containing translations that are grammatically correct, but are simply phrases and colloquialisms that are not natural to the viewer. For example, if a character is saying the equivalent of, ‘let me refresh your memory’ in a language other than English, the English translation should not be, ‘let me refresh your mind.’... An error like this is rarely an isolated event, but rather an indication that the translation was not performed by someone with a native fluency in the translated language.”

So what the writers call “colloquialism,” Netflix views as an error. Entrackr has more on the story, while this Twitter thread offers context. Also: This isn’t an ‘India’ problem. New York Times reports on the challenges of translating ‘Hamilton’ into German.

In happier entertainment news: Here’s some great news for fans of the podcast ‘Serial’—and the subject of its wildly popular debut season: Adnan Syed. The Pakistani American high school student was convicted in the 1999 murder of his ex-girlfriend Hae Min Lee. He served decades in jail until the podcast took up his case—and made Syed famous. Baltimore prosecutors have now asked a judge to vacate his conviction:

"The motion filed today supports a new trial for Syed based on a nearly year-long investigation that revealed undisclosed and newly-developed information regarding two alternative suspects, as well as unreliable cell phone tower data.”

NPR has more details. And be sure to check out Serial season 1. It is very, very good.

Meanwhile, in Chicago: R Kelly has been found guilty of sexually abusing teenage girls. This is the second time in a year that a jury has convicted the R&B singer of sex crimes. BuzzFeed News has more details.

An India-Pakistan battle over Rooh Afza

The context:  Created in 1907 by Hakeem Hafiz Abdul Majeed—the owner of Hamdard Labs—the rose-flavoured drink became the legacy of his two sons, who ended up on opposite sides of the border after Partition. A member of the same family has even set up a new Hamdard label in Bangladesh.

The case: The Indian Hamdard/Rooh Afza was upset that Amazon was selling the Pakistani version—without disclosing its origins. The Delhi High Court has now ordered the platform to take down the ‘Made in Pakistan’ products. Business Today has more on the lawsuit, and this older New York Times piece traces the history of Rooh Afza.

One: A new study shows that parenthood alters the brain of a new father—shrinking it by 1-2% after the birth of the first child:

“This shrinkage was mainly confined to an area of the brain known as the 'default mode network', which is associated with parental acceptance and warmth. At first, a loss in cortical volume might sound like a bad thing, but it can actually indicate a refinement of the brain that makes connecting with a child more powerful and efficient.”

Why this small study is exciting: until now the research has only focused on changes in the mother's brain. And similar losses in women are associated with stronger parent-child attachment. (Science Alert)

Two: Scientists have discovered something very useful for sleep-deprived new parents. The best, most reliable way to put that wailing baby to sleep is this: take a five-minute walkabout—and then sit down with the baby in your arms for another five to eight minutes. And then put them to bed. Why the walking works: it calms the babies down, slowing their heart rates within 30 seconds. BBC News has more details.

Three: This is more of a baby-adjacent story. According to a new population survey in Japan, 17.3% of men and 14.6% of women aged between 18 and 34 said they had no intention of getting married. This is a new record for a nation struggling with a declining birth rate—which has fallen for 11 consecutive years. Why this is happening:

“Experts have attributed the trend to several factors, including a growing desire among young working women to enjoy the freedoms that come with being single and having a career. Men say they also enjoy being single, but also voice concern over job security and their ability to provide for a family.”

The neti pot effect: A US study revealed that people who test positive for Covid should irrigate their nose with a good old neti pot twice a day. It greatly reduces the risk of hospitalisation. Why using a saline solution to flush your nose works: “If you have a contaminant, the more you flush it out, the better you are able to get rid of dirt, viruses and anything else.” (Fortune)

Air pollution: New research shows that healthy teenagers are more prone to irregular heartbeats when they breathe contaminated air. Why this matters:

“The findings have raised concern among researchers because heart arrhythmias, which can increase the risk of heart disease and sudden cardiac death, appear to be triggered even when air pollution is within common air quality limits.”

One: Grumpy about all the fuss over the royal family? Please enjoy this clip of Charles having a hissy fit over a leaking fountain pen—during a signing ceremony in Northern Ireland. Watch for the classic male move in the end—and what he does with the offending pen. (Metro)

Two: And since we all love pretty space pictures, here’s one of the Lobster Nebula—taken by the Dark Energy Camera (DECam) located in Chile. Yes, for once, it isn’t a James Webb Telescope achievement. (Inverse) 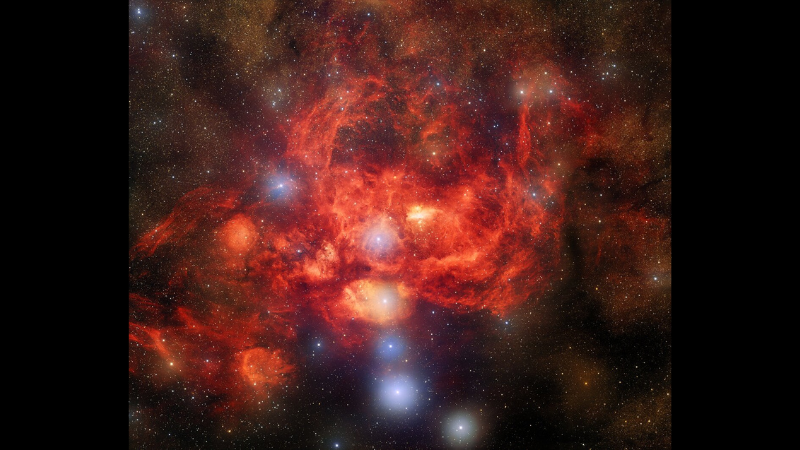