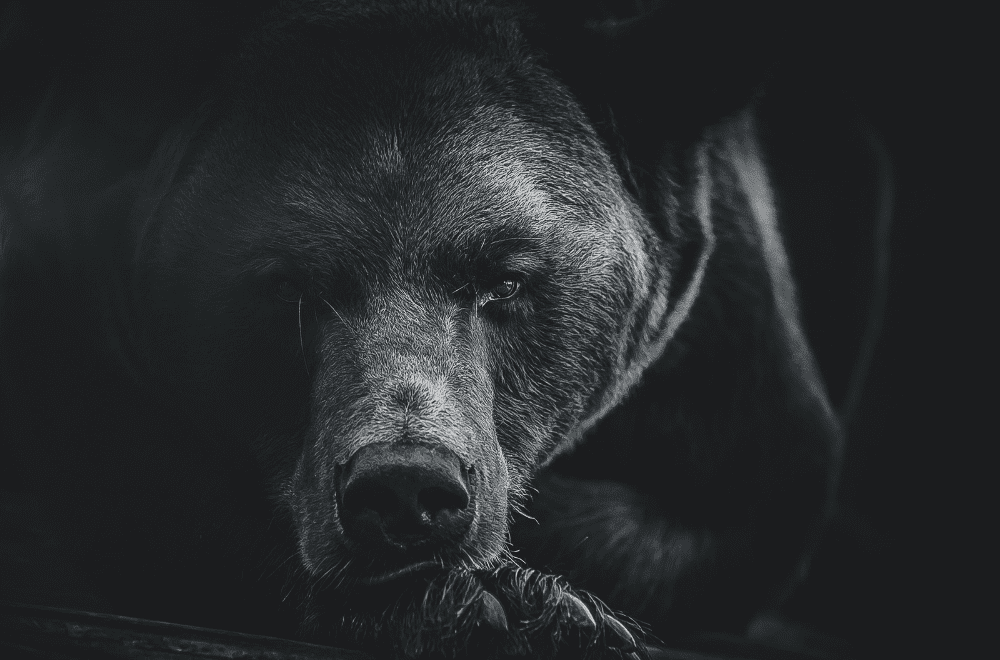 The great embarrassment of Vladimir Putin

Ukraine recently scored a shocking strategic victory—exposing the weak underbelly of a Russian military that now looks incompetent, undermanned and worse. And everyone is talking about the unthinkable—Russia’s defeat. What the hell happened?


How big was this victory?

How it happened: For months, Kyiv has been telegraphing a big offensive in the south. Then it deployed the oldest trick in the book: the headfake. Its troops struck with lightning speed in the east instead—and claim to have regained 6,000 sq km of territory—about twice the size of greater London. 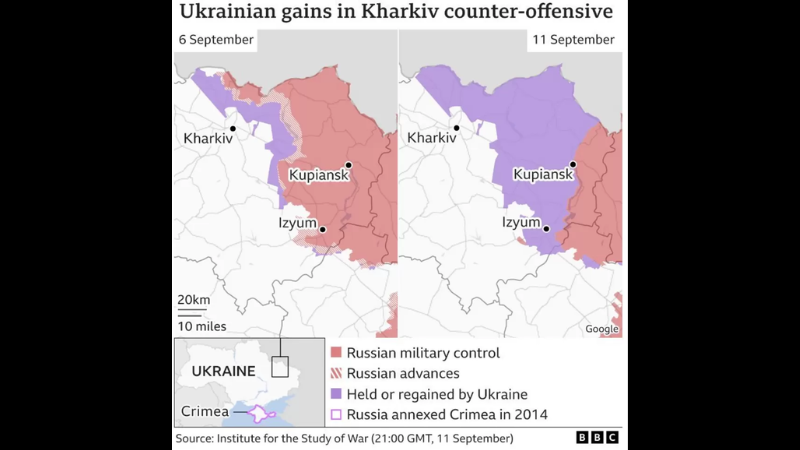 What’s worse: Russian troops just turned and ran at the face of the blitz—leaving behind precious military hardware. At least 338 pieces—from fighter jets to tanks to trucks—were destroyed, damaged or captured. This is not good news for a country struggling to replenish its supplies—buying hardware from the likes of Iran and North Korea.

See the clip of soldiers in a tank fleeing from the scene—which has since gone viral and been set to music:

Most importantly this: When Russia failed to capture Kyiv early in the war—as part of its grand plan to topple the government—it focused all its energy on Donbas. The far eastern region has the closest ethnic ties to Russia—and is a critical industrial hub that sustains Ukraine. It also includes the port of Mariupol—which is now controlled by the Russians. The logic: If they couldn’t take all of Ukraine, the Kremlin could at the very least splinter and cripple it.

But it has now lost two key cities—Izyum and Kupiansk—in the Kharkiv region. These military hubs are critical to resupplying its forces in the Donbas. See the map below—the regions marked Donetsk etc are in Donbas: 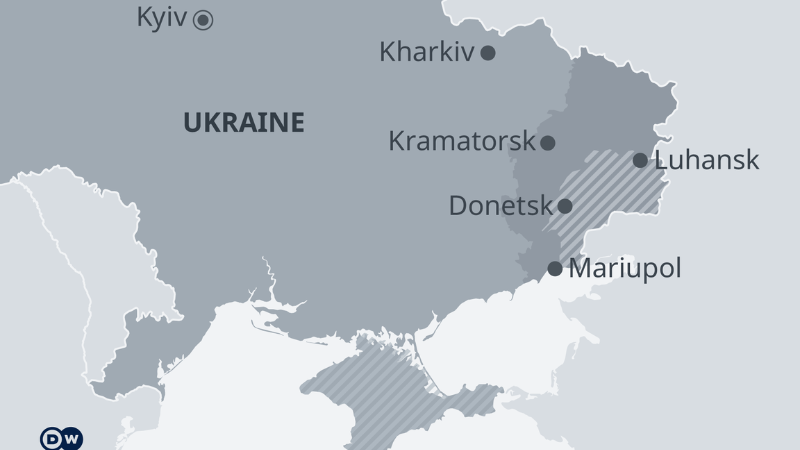 While Russia now controls great parts of the region, any setbacks would be devastating. There are already signs of Ukraine pushing past Kharkiv into Donbas.

The main takeaway: While momentum has shifted back and forth between the two sides, “but rarely with such a big and sudden swing.” The best summary of the enormity of Moscow’s setback: “The territory Russia captured in Ukraine over seven months, at the cost of tens of thousands of Russian casualties, has been lost in a week.” FYI: US officials estimate that Russia has suffered as many as 80,000 casualties since February—including more than 15,000 deaths.

But, but, but: Russia still controls about one-fifth of Ukrainian territory. And many experts doubt that the gains can be converted into an outright victory: “We’re still looking at this going into next year, unless the Russians make a political decision to withdraw. That is largely because the Ukrainians don’t have the reserves to exploit this and go all the way.”

So why are the Russians losing?

One: There was no Plan B. The Russians just assumed that they would be able to overwhelm Ukraine with their far greater military prowess. They were not prepared for a longer ground war—which requires strong logistics. For example: securing convoys of trucks carrying supplies on the ground. These soon ground to a halt and became easy targets for Ukraine:

“Badly led, Russian advances were abruptly halted as armoured columns were destroyed wholesale. Casualties rose sharply as tanks and trucks ran out of fuel, and soldiers ran out of food and ammunition. Armed formations were decimated by the powerful yet tactically nimble attacks by a Ukrainian military that had been expected to surrender on the first day but instead fought hard, inflicting a heavy toll on the invading Russians.”

Two: Weak military leadership. There is no single unified chain of command in the Russian military. As a result, Russian soldiers rarely knew what they were doing or why:

“They did not tell the troops they were actually being sent to invade Ukraine until very, very late in the game. Troops who believe that they are in an exercise are going to take a very different approach to thinking about logistics than they are if they actually believe they’re being sent into a large war.”

This lack of discipline forced generals to go further into the frontline to impose order—which in turn led to many being killed.

Three: Soldiers were saddled with shoddy and outdated equipment. The Kremlin's huge supply of artillery shells are ageing and were stored in poor conditions—making them unreliable. Many of the trucks carrying supplies broke down—because they were old and badly maintained.  Many of the tanks being used in Ukraine are “generations old, including a Soviet-era tank that first entered production more than 50 years ago.” As a retired US Army colonel notes:

“The Russians are exporting T-90 tanks and marketing Armata tanks, supposedly the latest generation with all the bells and whistles. And then they’re showing up on the battlefield… with Cold War-era, non-modernized, armoured combat vehicles—both infantry vehicles and tanks. And it’s like they took these things out of mothballs. So it seems that Russia’s military industry was geared toward export instead of equipping its own ground forces with modern equipment.”

Four: Ukraine has done far better—and it’s had more help. Naturally, its troops—which includes civilian draftees—are far more motivated to do whatever it takes to defend their land. And given that Kyiv is viewed as the ‘good guy’, it has also benefited from tens of thousands of volunteer soldiers from around the world. But its most critical weapon is the High Mobility Artillery Rocket System or HIMARS—a gift from the US that strangled Russian supply lines:

“The US-made weapon can shower a target with precision rockets hundreds of kilometres behind the Russian front lines… and Russian ammunition and supply dumps have been targeted and destroyed. This has weakened Russia’s ability to amass enough weapons and ammunition to achieve a breakthrough, and Russia’s leadership has watched in dismay as offensive after offensive has ground to a halt due to a lack of supplies.”

So is Russia going to lose this war?

To prevail, Russia has to solve its numbers problem. Putin recently issued an order to recruit 137,000 soldiers—to raise the total number of troops to 1.15 million. These will primarily be drawn from volunteers—but that is going to be a serious challenge. And here’s why.

Other than full-time military personnel, Russian forces are made up of two other types of soldiers:

One: Conscripts. All Russian men aged 18 to 27 must serve one year in the military. New conscripts only undergo up to eight months of training before being sent to designated units. There are around 270,000 conscripts—and they account for a quarter of the military.

The problem: The average Russian is adamantly opposed to using conscripts to serve in wars—and Putin has done his best to reassure them it won’t happen. The reason: The war remains hugely popular with the civilian population—safe at home, and far from the frontlines. A nationwide draft would rudely destroy that false sense of normalcy. And it may succeed where the Western sanctions failed—in destroying Putin’s popularity.

Point to note: Russians are instead forcibly drafting young men in Donbas—the Ukrainian region it controls—and using them as cannon fodder: “Some have been grabbed right off the streets and dispatched to the trenches with little or no training and vintage guns.”

Two: Contract soldiers. Any male over the age of 18 can sign a temporary contract with the Ministry of Defence to earn a living as a soldier for a limited period of time. Think of this as the Russian version of our Agniveer scheme. There are 400,000 contract soldiers, including about 147,000 in the ground forces.

The problem: Most of the contract soldiers were recruited before the war—and many are now refusing to serve. In desperation, the Kremlin is resorting to a “stealth mobilisation”—offering hefty salaries between $2,000 and $6,000 a month—far higher than the average Russian salary of $700. It has scrapped the age limit of 40 for contractors—and is even recruiting prisoners. But none of it seems to be working—according to outside observers.

Point to note: US defence officials claim, “Many of these new recruits have been observed as older, unfit and ill-trained”—and “any additional personnel that Russia actually can muster by the end of the year, in fact, may not increase overall Russian combat power.”

The underlying rot: The reality is that the Russian military leadership is both corrupt and callous. Soldiers were forced into the radioactive area around the Chernobyl nuclear plant without protective gear—and had to live there for a month. Some Russian commanders simply disappeared, leaving their troops without shelter, food, or water. Others got frostbite due to inadequate clothing. Foreign Affairs notes:

“The Russian military’s disregard for its soldiers has done more than undermine their combat performance. It has also tanked their morale and will to fight… Officials forget to pay soldiers their entitled combat pay, and units abandon the bodies of the fallen. It is little wonder, then, that some Russian troops simply melted away from the conflict… Other soldiers have called their mothers to tell them they were considering shooting themselves in the leg so they could leave.”

The bottomline: It is far too early to tell who will win this war. Ukraine too is running low on supplies—and has suffered far greater casualties. But the critical factor may not be Ukraine’s strength but the Russian military’s endurance for punishment.