US midterm elections: Whither ‘red wave’?

The context: Historically, the opposition party always does very well in the congressional elections—held in the middle of a sitting president’s White House term. This year, Republicans were poised to wallop the Democrats…until the Supreme Court delivered the ruling overturning the constitutional right to abortion. The decision galvanised the Democratic base—and helped mitigate the party’s serious handicaps: an unpopular president and soaring inflation. But that giant sweep never materialised.

The results: All the outcomes are not known as yet—since many states do not count mail-in ballots until election day. But the Republicans are on track to claim the House by a narrow margin. The Senate, however, is split at 48-48. Its fate may eventually lie in a rematch in an extremely close race in Georgia—whose laws require a runoff election if neither candidate secures 50% of the vote. You can check out the latest results here or here. New York Times and CNN have the key takeaways.

Regarding Trump: It was not a good night for the former president. One, the big win of Governor Ron DeSantis sets him up as the leading contender for the Republican party’s nomination in the next presidential election—which Trump is determined to win. Two, a number of the candidates he handpicked in the midterms are slated to lose. It will raise serious questions about Trump’s hold over the GOP—and whether his influence is responsible for the poor showing.

Meta will lay off 11,000 employees—which is 13% of its total workforce—marking the most significant job cuts since its founding in 2004. CEO Mark Zuckerberg stepped up and took responsibility for the bloodbath, saying:

“At the start of Covid, the world rapidly moved online and the surge of e-commerce led to outsized revenue growth. Many people predicted this would be a permanent acceleration that would continue even after the pandemic ended. I did too, so I made the decision to significantly increase our investments. Unfortunately, this did not play out the way I expected.”

Zuckerberg’s biggest bet was on metaverse—which has cost the company $9.4 billion in losses: “[T]he company’s flagship metaverse social platform, Horizon Worlds, is so buggy and unpopular that Meta’s own managers have been forced to shame employees into using it.” (New York Times, paywall, The Verge)

The H1-B angle: More than 15% of Meta’s employees are in the US on a work visa. And they have only 60 days to find a new employer—at a time when the industry is reeling from revenue losses. Zuckerberg acknowledged their pain—and announced that the company has a team of dedicated immigration specialists to help. (NDTV)

Meanwhile, over at Twitter: We now know that Elon Musk has sold Tesla shares worth $3.95 billion—just days after he closed the deal to buy the company. He has now unloaded a total of $36 billion in Tesla stocks over the past twelve months—leaving him with a 14% stake in the company. FYI: Tesla has lost nearly half its market value ever since Musk bid for Twitter in April. We explained how the Twitter deal is linked to Musk’s personal wealth in our Big Story. (Reuters)

Sticking with Twitter: The latest twist in the ‘blue tick’ saga involved a grey “official label” that was supposed to authenticate high-profile accounts—for free. It was limited to “government accounts, commercial companies, business partners, major media outlets, publishers and some public figures.” In other words, grey was the new blue…except the feature was no longer visible within hours. Musk later confirmed: “I just killed it”. He later added: “Please note that Twitter will do lots of dumb things in coming months. We will keep what works & change what doesn’t.” (Associated Press)

After a shaky start—and a heartbreaking loss to India—the boys in green comfortably beat New Zealand by seven wickets in the semi-final. Openers Babar Azam and Mohammad Rizwan came back in form with a roaring 105-run partnership. If India beats England in tomorrow’s semis, well, brace yourself for madness. Scroll has a good piece on Pakistan’s amazing resurgence. (Mint)

In other big sports news: Liverpool—one of the top Premier League teams—is up for sale. Its US owners Fenway Sports Group is shopping around for buyers. The latest rumours centre around a number of contenders. There’s RedBird Capital Partners—who already have a 10% stake in the club. Also: Sir Jim Ratcliffe who owns a number of other European teams—and is Britain’s richest man. But everyone is talking about Sheikh Khaled—who is the cousin of Manchester City owner Sheikh Mansour. He’d tried and failed to buy Liverpool back in 2017 and 2018. If he succeeds, three of the top teams in the league—including Newcastle—will be owned by Arabs. A point that is already controversial in the UK. (Metro UK)

The government is readying a new advisory that will require all TV channels to air “national interest” content for 30 minutes every day. These can cover a variety of topics—including education, health, agriculture, environment—and that old socialist-era fave “national integration.” Foreign, sports and wildlife channels are likely to be exempt. Detailed guidelines will be published soon. (Indian Express)

Yet another FIR against a movie

The latest flick to attract a police complaint is ‘The Kerala Story’—a fearmongering movie about love jihad in the state. The teaser claims 32,000 young women in the state have been forcibly converted to Islam—and recruited by ISIS. To be clear, this is a Hindi film directed by Sudipto Sen and produced by Vipul Amrutlal Shah. The planned FIR will charge them with promoting disharmony and enmity between different groups based on religion. Watch the teaser below. (The Quint)

Fibre diet for cancer: A new study has found that your gut microbiome—which consists of trillions of bacteria and other microbes—can vastly affect the performance of cancer treatments like immunotherapy. So your response is likely to be better if you have the right kind of bacteria. But here’s the interesting bit:

“Even more stunning: scientists believe that giving patients a fibre-rich diet of fruits, vegetables, beans, nuts and whole grains to nourish the microbiome might improve the odds that the cancer treatment is effective.”

That theory is still being tested. FYI: between 60% and 80% of the immune cells in our bodies reside in the gut. Also read: Our thought-provoking Big Story on the link between mental health and our gut bacteria. (Washington Post)

‘Social jet lag’: A fascinating new study found that nearly 50% of adults in the US suffer from this condition. But what is it? Now, all human beings have an internal body clock—driven by the circadian rhythms of their cells. It determines when your body naturally feels sleepy, how long you might sleep left to your own devices—and best reflected on how you sleep on weekends. But our social clock during the week is driven by the demands of work, family etc—which often determine how much and when we sleep.

The greater the mismatch between the two, the greater our “social jet lag.” To put it most simply: “The timing of your sleep on workdays is the societal and work constraints, but the timing of your sleep on free days is what your body clock really wants you to do.” The greater the difference, the greater the “jet lag” during the week. In fact: “One hour of social jet lag is like travelling one time zone.” And if left untreated, it can result in all sorts of health problems such as insomnia, daytime fatigue, difficulty concentrating, constipation and increased cortisol levels. It could also play a role in the development of obesity, type 2 diabetes and heart disease.  (CNN)

Drake and 21 Savage used a fake Vogue cover to promote their new album ‘Her Loss’—and are now being sued by the magazine’s parent company Condé Nast. What’s ticking Vogue off: the PR stunt was “built entirely on the use of the Vogue trademarks and the premise that Drake and 21 Savage would be featured on the cover of Vogue’s next issue.” And to add insult to injury, they distributed the fake issues across the country. Condé Nast wants $4 million in damages—and an injunction to suspend all use of the dummy covers—for this “flippant disregard for Condé Nast’s rights.”

Point to note: The company is the only one to complain about Drake’s promo campaign—which has included all sorts of pranks—such as deepfake appearances on ‘The Howard Stern Show’ and NPR’s ‘Tiny Desk;. None of them seemed to mind. Need a sense of humour much? (NPR) 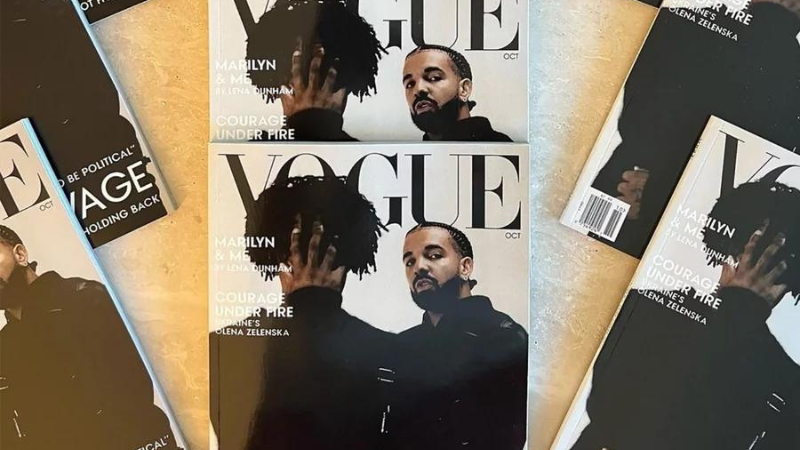 For a change: A Norwegian royal drama

Bored of the Windsors? We offer you Princess Märtha Louise—who announced that she will be stepping down from her royal duties to focus on her “alternative medicine business.” Her business partner: fiance Durek Verrett who claims to be shaman. He is a self-styled Hollywood guru with famous acolytes like Gwyneth Paltrow. One of his popular products: A ‘Spirit Optimizer’ to cure Covid. That said, Märtha Louise is no less nutty. She famously began working as a clairvoyant in 2002—and began a school to help people "get in touch with their angels." (BBC News)

One: DY Chandrachud officially took oath as the 50th Chief Justice of India—and will have the top job until 2024—the longest tenure in recent times. Read our Big Story on the new Chief Justice for more details on what to expect. And here’s an adorable photo of the CJI with his wife and foster daughters—clicked by Indian Express photographer Tashi Tobgyal. (The Print) 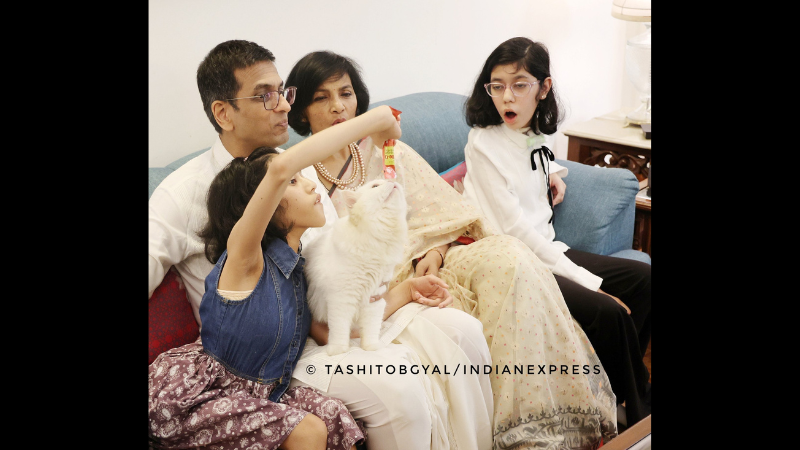 Two: Rapper Takeoff—member of the Migos trio—was given a virtual funeral by players of Grand Theft Auto. He was shot after a private party in Houston on November 1. Watch the entire funeral here. (Yahoo News) 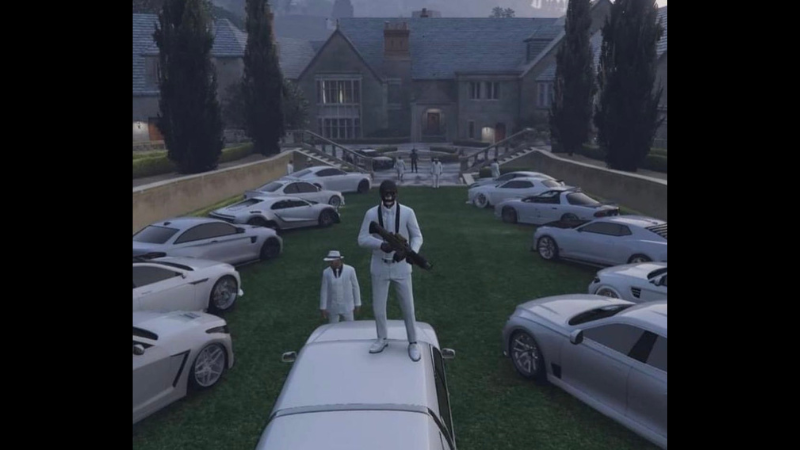 Three: Charles and Camilla got a very un-royal welcome in Yorkshire from a man who threw three eggs at them, yelling, “[T]his country was built on the blood of slaves.” Of course, he was arrested. (The Guardian)