A thrilling end to US Open

Britain's Emma Raducanu prevailed in the battle of teen titans against 19-year old Leylah Fernandez—and became the first qualifier to capture a Grand Slam title with a straight-set victory (6-4, 6-3). It is a stupendous achievement for the unheralded 150th-ranked player. Also: she did not drop a set in the entire championship! The Telegraph has more on the response to her incredible achievement. The Guardian looks at why this is being called the greatest underdog story in British sport. New Yorker has a piece of the tennis fairytale in New York. Fernandez paid a lovely tribute to 9/11 in her speech:

Meanwhile at the men’s final: Daniil Medvedev denied Novak Djokovic his bid to score the first calendar-year Grand Slam in men’s tennis since 1969. The match ended with Djoko in tears—after a loss in three straight sets 6-4, 6-4, 6-4. Later Djokovic said:

"I was glad it was over because the buildup for this tournament and everything that mentally, emotionally I had to deal with throughout the tournament in the last couple of weeks was just a lot. It was a lot to handle"

A shameful US drone strike in Afghanistan

After the Islamic State’s attack on the Kabul airport, President Biden vowed there would be consequences. And soon after, the Pentagon claimed that it had successfully launched a drone strike on a suicide bomber in a car—an attack that resulted in the death of 10 people, including seven children. A New York Times investigation shows that the so-called suicide bomber was actually a worker with a US-related NGO, and the “bombs” were water bottles that he had loaded on to his car. We strongly recommend reading this report for yourself.

The IT department was overactive on the weekend—conducting tax “surveys” at the offices of NewsLaundry and NewsClick. NewsLaundry CEO Abhinandan Sekhri issued a statement saying:

“My personal mobile phone, laptop and a couple of office machines were taken control of and all the data on them downloaded by the IT (income-tax) team. In my understanding this (taking all data from my personal laptop and mobile phone) violates my fundamental right to privacy. No signed hash value of the data copied was provided to me.”

He was not allowed to consult a lawyer either. NewsClick is already under investigation for violating foreign investment rules—which is not supported by any evidence thus far. The Telegraph has more details.

ICYMI, there was a lot of fuss over Facebook’s hot new product: Ray-Ban Stories, which are glasses that can take photos and short videos while you wear them. Basically, you can now go hands-free. We aren’t exactly sure what the big fuss is about, but BuzzFeed News has a good intro to the new device. Here’s the promo:

And here’s an FB executive recording himself throwing pillows at the Zuck:

The Ig Nobel prizes are here!

The award honours the most bizarre and quirky advances in science. For example, the Ig Nobel peace prize went to a researcher who found that men evolved beards to protect their faces in a fistfight. The transportation prize went to a team that found airlifting tranquilised rhinoceroses upside down is probably better for them than carrying them on their sides in slings. The funniest of the lot:

“Cem Bulut, a professor at the SLK Clinics in Heilbronn in Germany, and colleagues, won the medicine prize for research that suggests sex with orgasm is an effective nasal decongestant. Having developed suspicions based on ‘self-observation’, Bulut recruited a group of co-workers to investigate.”

Speaking of sex: California is poised to outlaw “stealthing”—i.e. removing a condom during sex without the knowledge or consent of the other person. Point to note: “The bill would amend the civil code, allowing victims to sue perpetrators for damages, but would not change the criminal code to make it a crime that would send perpetrators to jail.” (The Guardian)

One: A new study shows that high salt diets can help suppress cancerous tumours. The even better news: Scientists found no toxicological effects on any major organs, including the heart, lungs, kidneys, liver, or spleen. The research has only been conducted in mice so far, but it offers great promise for human treatments:

“Salt has recently been identified as a trigger for activating immune response and promoting inflammatory response in autoimmune diseases. Therefore, we reasoned that salt might be helpful in overcoming suppressive tumour microenvironment and thereby could promote an anti-tumour immune response.”

Two: A global review confirms what most of us suspected: at least one in six people who receive Botox injections suffer from a range of adverse effects—including bruising, headache, nausea and “frozen” features. Another one in five reported a range of negative skin reactions. And one in eight suffered cardiovascular symptoms ranging from high blood pressure to an abnormally fast heart rate and heart attacks. And yet most of these incidents are never reported. The Guardian has more.

Three: Binging on TV can shrink your brain. New research finds that every extra hour of average daily TV time between the ages of 30 and 50 was linked to a 0.5% reduction in grey-matter volume—which is typically a sign of declining brain performance. Point to note:

WhatsApp is encrypting your backups

In a significant move to protect user privacy, the messaging service will now encrypt all the messages, photos and videos that you back up on to cloud services on Google and Apple. Why this is a big deal: In a number of prominent cases—including the death of Sushant Singh Rajput and the arrest of Arnab Goswami—the police have used backed up data to access and leak WhatsApp conversations. So this is very good news indeed! Indian Express has a detailed explainer on the new feature.

One: A painting by Winston Churchill titled ‘The Bridge at Aix-en-Provence’ is going up for sale—and is expected to fetch between £1.5 million and £2.5 million. The legendary (or more likely, infamous for Indians) British prime minister started painting at the age of 40, and produced about 500 canvases—most of which he fobbed off on friends and foreign dignitaries. Was he any good? According to the Times UK art critic:

“For evidence of how common sense can be destroyed by patriotic emotions you need search no further than the current passion for the art of the third-rate dauber Churchill. His work would not even have made it past the first round at the Royal Academy Summer Show. Yet he has managed to become an artist whose pictures sell for millions of pounds. Hah!... How many idiots are there out there?” 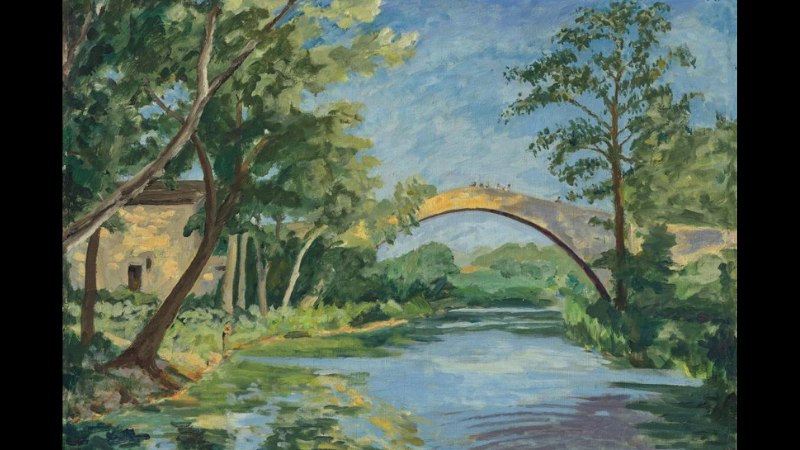 Two: Canadian palaeontologists have discovered a monstrous relative of the horseshoe crab that dominated the seas 500 million years ago. The Titanokorys gainesi measured 19.7 inches at a time when most other ocean-dwelling organisms were barely as large as a pinky finger. As if that weren’t scary enough, it  had “multifaceted eyes, a pineapple slice shaped, tooth-lined mouth, a pair of spiny claws below its head to capture prey and a body with a series of flaps for swimming.” See this giant “swimming head” below. (CNN) 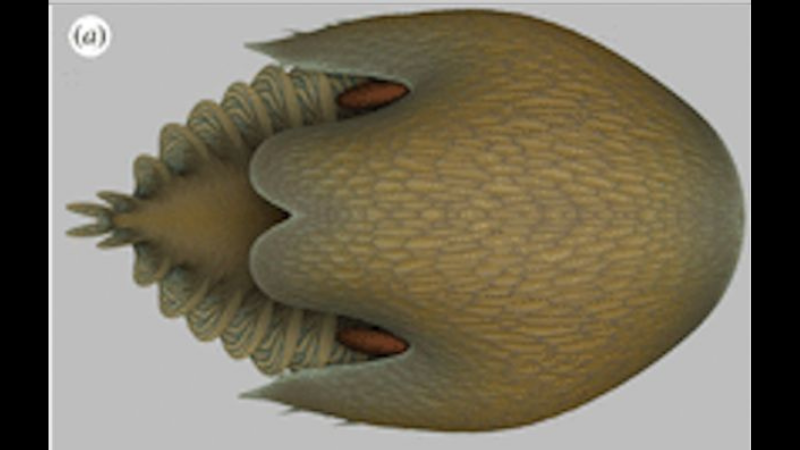