China bulks up on the border

Indian military sources are reporting a massive buildup on the north bank of Lake Pangong. And this has been confirmed by Chinese media reports which claim that Beijing is “mobilising forces, including bombers, air defence troops, artillery, armoured vehicles, paratroopers, special forces and infantry units from different parts of the country to the bordering plateau region.” The Hindu has more on the buildup.

Meanwhile, a “top government official” told Times of India: The dispute is being directed from the very top of the political-military hierarchy in China, not by the exuberance of local PLA commanders. It can take any trajectory. But if China wants to start a war, it will also have to pay a heavy price.” TOI has more on India’s counter-measures.

Also fighting with China: Australia, which has canceled visas for two visiting scholars. Beijing also accused Australian officials of raiding the homes of a number of Chinese journalists back in June. And that’s after two Australian journalists finally flew home after a five-day diplomatic standoff. They were being questioned by Chinese police over claims that they had endangered national security. The Guardian has more on how Beijing is now harassing foreign correspondents to show its displeasure.

Also canceled: the US visas of over 1,000 Chinese students and researchers. The stated reason: they have links with the Chinese military.

OTOH, Tiktok may survive: Its parent company ByteDance is back to huddling with the US government to find a way to sell only a part of the US operations. The reason: The Chinese government’s new rules may prohibit the sale of TikTok’s AI algorithm—without which there will be no buyers for the company. So ByteDance is trying to figure out a solution that includes a minority US tech partner who will ensure that TikTok’s data is secure—and safely out of Beijing’s reach. (Wall Street Journal)

Trump lied about the virus

A new book by Bob Woodward—perfectly timed for the upcoming presidential election—shows that the President knew that the virus was bad news—and deliberately lied to the public about it. How does Woodward know this? Why, Trump personally told him of course! In February he said to Woodward:

“You just breathe the air and that’s how it’s passed… And so that’s a very tricky one. That’s a very delicate one. It’s also more deadly than even your strenuous flus… This is deadly stuff.”

And in March—after a month of dismissing the virus as a form of flu—he admitted to Woodward: “I wanted to always play it down… I still like playing it down, because I don’t want to create a panic.” Washington Post has more on the book.

In related US news: According to a new study, a mega-motorcycle rally held in South Dakota may have resulted in 250,000 cases. The 10-day rally attracted more than 400,000 people with "minimal mask-wearing and social distancing by attendees."

The great pandemic: An India update

Local municipal authorities in Mumbai bulldozed parts of the actor’s bungalow—claiming that they were constructed without proper permission (watch it here and here). The High Court has since ordered a stay. And Ranaut has offered up badly written lines of Bollywood dialogue (watch that clip here):

“Uddhav Thackeray tujhe kya lagta hai? (what do you think?) My home was demolished today, your arrogance will crumble tomorrow. Thus is the wheel of time, it keeps changing.”

Ambani-ji’s streak of raising insane amounts of money continues unabated. First, he raised $20 billion for his digital empire—Jio Platforms—from the likes of Facebook and Google. Now he’s doing the same for his retail arm. The private equity fund Silver Lake will shell out $1.02 billion for 1.75% stake in Reliance Retail—this after it plowed in $1.35 billion in Jio Platforms earlier this year. Another global investment fund, KKR & Co, is reportedly planning to follow suit with $1 billion. (Mint)

A new restaurant in Coimbatore in Tamil Nadu is fully operated by transgender staff. But it wasn’t easy being the first of its kind:

“Our restaurant is the first in the state that is run entirely run by the Transgender community members. People were hesitant to provide us a space for rent, some of them told they are not sure how we are going to run a restaurant all by ourselves as it has not been done before.”

The restaurant, however, is doing well. And there are already plans to open a second one. (Indian Express)

The seal who didn’t fit in

This exceptionally rare (part-albino) seal pup—spotted in the Sea of Okhotsk in Russia—has ginger fur, blue eyes and pink flippers. And it is being carefully monitored by biologists. The reason: they are worried it may be rejected by the rookery—and there are some worrying signs: “Other seals don't pay too much attention to it in a somewhat worrying manner, so something is not quite right with it.” But even if he were cast out, biologists are ready to swoop in and fly him out to a dolphinarium—where he will be free to be his very unique self. (Siberian Times) 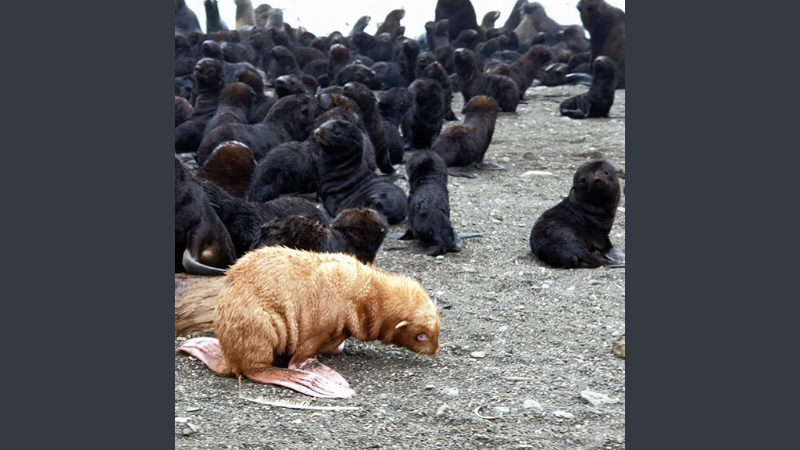