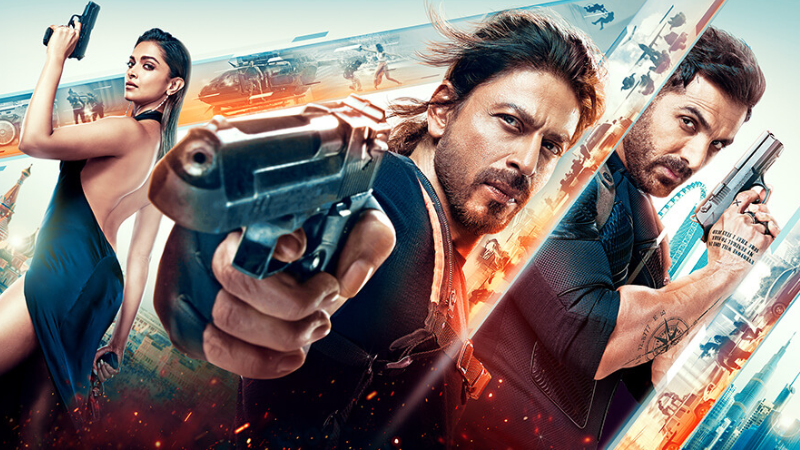 Pathaan: The big SRK comeback is here—marking the return of the Badshah after a four year hiatus. ‘Pathaan’ is a spy action thriller starring Shah Rukh Khan who plays a formidable RAW agent and shares the screen with Deepika Padukone—the femme fatale spy and John Abraham—the antagonist. The plot is a rather predictable one—Abraham’s private terrorist group ‘Outfit X’ is planning a massive attack on India and the Indian government is sending Pathaan i.e. SRK to stop them.

‘Pathaan’ is one of the most anticipated movies of the year. With back-to-back stunts and 'Mission Impossible’-like fast-moving script (or lack thereof), we expect the film to have mass appeal and to be a must-watch for any SRK fan.

Shrinking: We are very excited about this new comedy series starring ‘How I Met Your Mother’ actor Jason Segal in the lead role. The story follows Jimmy (Segal)—a therapist grieving his wife—who decides to break the rules of his ethical training and tells his clients how he feels and what they should do. In a series of mishaps and bad decisions, he changes the lives of his clients and his own for the better. From the executive producers of ‘Scrubs’ and ‘Ted Lasso’, the series also stars the ‘Indiana Jones’ actor Harrison Ford in a big role, alongside Jessica Williams, Christa Miller and Michael Urie.

The reviews are mixed and slightly biased towards Harrison Ford. Indie Wire is of the view that “without Ford, ‘Shrinking’ may have been unbearable.” Variety thinks “Ford seems poorly used and out-of-place in this comic milieu,” but also acknowledges that the story has some “strong stuff” and is hopeful for future seasons “to embrace the side of therapy that’s about questions, not just their answers.” Collider concludes that “plenty of viewers will find a lot they can relate to, but it also may hit too close to home for others.” The first two episodes land on Apple TV+ on January 27, followed by one new episode every Friday.

You People: This one is to fulfil your rom-com needs. Co-written by Jonah Hill, the film begins with Ezra (Jonah Hill)—a jewish guy looking for a love interest—meeting Amira (Lauren London), a black Muslim woman. Six months down, they decide to get married and in classic meet-the-parents fashion, both get their families together. The families interact awkwardly—bringing to fore their cultural differences—with conversations around race, holocaust, black culture, police brutality, etc. The parents are played by excellent actors—David Duchovny and Julia Louis-Dreyfus, Nia Long and Eddie Murphy.

Variety calls the film “a modern-day riff on ‘Guess Who’s Coming to Dinner’” but is disappointed with the ending saying it “fizzles out and loses its nerve when it matters the most.” Hollywood Reporter is kinder saying that the film “fits quite comfortably within a time-tested rom-com formula” and “doesn’t entirely lose its edge” even when the plot becomes predictable. Calling it a “mixed bag of laughs and discomforts,” Screenrant says the movie “is an easy watch to satisfy boredom.” ‘You People’ lands on Netflix on January 27.

Extraordinary: ‘Extraordinary’ is an eight-part British comedy show set in a world where everyone gets a superpower when they turn 18…except our protagonist Jen who is 25 and still doesn’t know her powers. The series follows her story as she navigates the world desperately wanting a superpower and battling insecurities of not fitting in—something we are all too familiar with in the real world as well. Produced by the makers of ‘Killing Eve’ and starring Máiréad Tyers and Sofia Oxenham, the series appears to be a light satire on society and quarter-life crisis.

Evening Standard found that the show lacks depth at times but makes up for it with “a blend of comforting and awkward hilarity.” It also praised the show for its “razor-sharp comedic writing” and the actors’ performances. Collider doesn’t entirely agree—finding some of the gags “too predictable, and sometimes very cringey.” But it does conclude the series is enjoyable, so we plan to check it out:) Dropped on Disney+ Hotstar today.