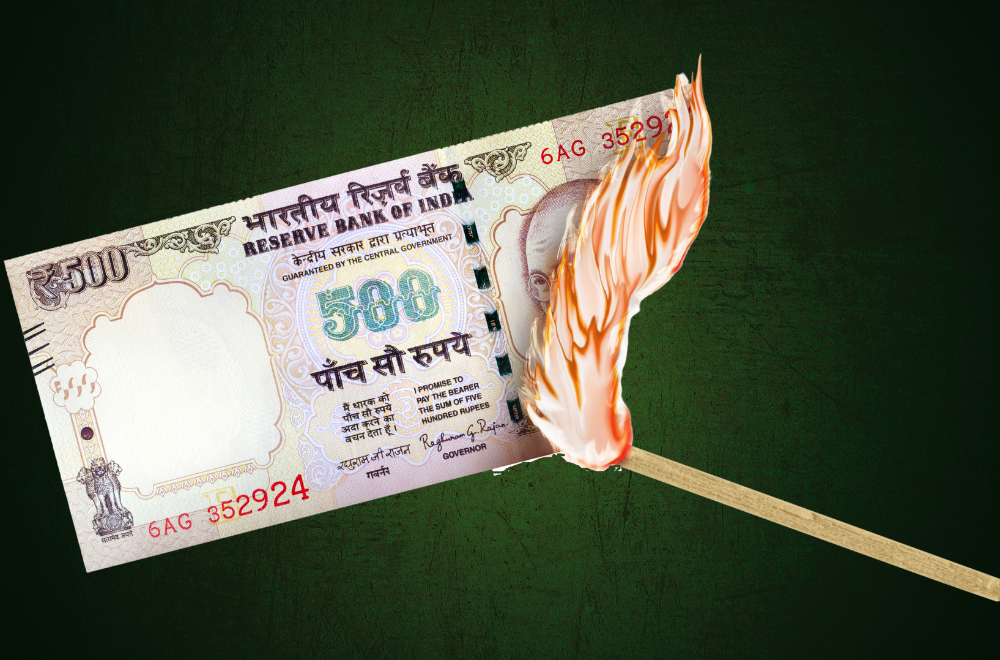 A Supreme Court blessing for notebandi

The Supreme Court yesterday ruled that the 2016 decision to demonetise Rs 500 and Rs 1,000 notes overnight is entirely constitutional—and falls within the government’s powers as an executive.

Remind me about demonetisation…

First, a definition: Demonetisation is a very long word for a fairly straightforward concept. This is when any unit of currency is stripped of its financial value—and can no longer be used for transactions. The rupee in your wallet is essentially an IOU note issued by the Reserve Bank—promising to recognise its value. When a specific unit of a currency is demonetised, that promise no longer holds—and it becomes worthless.

The 2016 DeMo announcement: On November 8, the Prime Minister announced to shocked citizens that the Rs 500 and Rs 1,000 notes in their possession no longer had value. Taken together, these accounted for about 86% of total cash in circulation at the time—all of which was now worthless. Citizens had 52 days to exchange their old notes for new ones.

The justification: The government offered three goals for its drastic policy decision. One, it would make the stashes of  black money—typically stored in large denominations—immediately worthless. And as the Economist notes, this is an entirely reasonable aim:

[T]he government hopes to improve the functioning of the economy and boost its tax take by cracking down on the shadow economy. The vast majority of transactions in India take place in cash; many escape book-keepers’ notice. Economists reckon that India’s black economy accounts for at least 20% of GDP. Such off-the-books activity shields fortunes from taxation and allows corruption to flourish. Past efforts to attract black money into the light—using tax amnesties, for example—have had little effect.

Secondary purposes included nudging Indians to embrace a cashless economy—and curbing counterfeit notes. All of which led to more enthusiastic supporters of the policy to claim that the Rs 2,000 notes were embedded with a ‘Nano-GPS’ chip to track their location:

The giant mess: In theory, DeMo sounded like an excellent idea. But execution proved far more messy. Banks immediately ran out of cash—triggering panic and suicides among bankers and customers. People starved without access to their money. And when the dust settled, the benefits have been hard to detect:

One: Of the Rs 15.4 trillion in circulation, Rs 15.31 trillion was returned to the Reserve Bank—in other words, were declared ‘white’—by hook or by crook. The reason: most of the kala paisa was stored not in cash but in jewellery and real estate. And there’s plenty of evidence that the tax-dodging scoundrels have returned to their old ways—albeit with new Rs 500 and Rs 2,000 notes.

Two: India has not made any noticeable progress toward becoming a cashless society. While there has been far greater use of UPI, cash is still king—increasing in circulation from 8.7% of GDP in FY17 to 14.7% of GDP in FY21.

The main takeaway: Most independent economists agree that demonetisation didn’t really work. But the Supreme Court case raised the other big question: Was it legal?

And was demonetisation legal?

The 4-1 verdict resoundingly says ‘yes’—delivered six years after the fact. The first petition challenging demonetisation was filed on November 9, 2016—and yet the highest court dragged its feet until the issue in its own words became an “academic debate.”

The core challenge: Clubbed together, the petitions broadly argue that the RBI should be in charge of all matters related to currency. They cited this specific clause of the RBI Act:

On recommendation of the Central Board the [Central Government] may, by notification in the Gazette of India, declare that, with effect from such date as may be specified in the notification, any series of bank notes of any denomination shall cease to be legal tender…

The government’s lawyers: argued that this reverse process is hardly a violation of the RBI Act:

On the other hand, it is the case of the government and of the RBI that it is open for the Central Bank to base its ‘recommendation’ on the advice and inputs of the central government, especially on issues within the executive’s domain (such as combating terror financing, eliminating fake currency, and eliminating black money). The RBI can still make an independent decision based on those inputs.

In other words, this case wasn’t about whether DeMo was a wise policy decision. The Court had to merely decide whether it was constitutional.

Point to note: According to Indian Express—contrary to the government’s claims in court—the RBI was “never in the loop.” A high-ranking bank official who was part of the decision said:

It is said that the government was in consultation with the RBI for six months. The (RBI) board was never in the loop. Maybe one or two people from RBI would have known. Suddenly within half-an-hour or one hour, you issue a notice and call a meeting without even informing about the agenda.

FYI: The RBI refused to release the minutes of this crucial meeting on November 8—which led to its recommendation of demonetisation. The reason: “information sought is exempt from disclosures under 8(1)(a) of the RTI Act, 2005.” The Court doesn’t seem to have addressed this aspect.

Why does any of this even matter now?

Because the majority verdict appears to give a carte blanche to the executive—i.e the union government—in matters of currency:

The central government is the best judge since it has all the inputs with regard to fake currency, black money, terror financing and drug trafficking. As such, what measure is required to be taken to curb the menaces would be best left to the discretion of the government in consultation with the RBI.

The Court also noted that it “cannot supplant the wisdom of the executive with its wisdom. Decision-making process cannot be faulted merely because the proposal emanated from the centre.”

Point to note: The majority ruling also rejected the argument that the government could only demonetise one series or denomination of the currency. ‘Series’ refers to the fact that the central bank often issues updated versions of a note to fight counterfeiting etc. In other words, the government can tomorrow declare every kind of note worthless—from Rs 10 to Rs 2,000.

The minority opinion: lays out the argument against this kind of sweeping ruling. Justice BV Nagarathna notes that RBI’s decision was taken in a rush—and had “hardly any time to apply its mind independently to the proposal” and acted merely on “assurances” given by the government. More importantly, she rejects the idea that the government can merely issue an overnight notification to take such a serious step: “When the proposal for demonetisation originates from the Central Govt, it is not under Section 26(2) RBI Act. It is to be by way of legislation, and if needed, then by way of an Ordinance." In other words, Parliament should have been consulted.

The bottomline: Experts have ruled that demonetisation’s effect on the Indian economy was “significant but not catastrophic.” But to debate the effects of notebandi is to miss the bigger point made by the Economist:

Managing an economy’s money is among the most important tasks of the government. Clumsy use of monetary instruments comes with high risk. John Maynard Keynes, an economist, was echoing Lenin when he wrote in 1919: “There is no subtler, no surer means of overturning the existing basis of society than to debauch the currency.” Trust is fragile, and precious.

The Hindu has a good overview of the case—while SC Observer has all the original documents. Gautam Bhatia lays out the legal issues at length—though we would not recommend this for a layperson. Alok Prasanna offers a counterview. The Economist has the best read on the demonetisation decision. Indian Express does a good job of contrasting the majority and minority decisions.