A very happy new year to all of you! May 2023 be truly epic in the best way possible. We’re getting off to a running start with our app—which will be rolled out around mid-January. So please be patient:) We plan to unveil more splainer experiences—similar to our Red Fort tour—and in different cities. Also: I’m delighted to invite Aarthi Ramnath and Nirmal Bhansali to the splainer team. We are all ready to kick ass in 2023!

A damning UN resolution on Israel

Since 1967, Israel has occupied great parts of Palestine—including the West Bank and East Jerusalem—making it the longest occupation in history. Fifty five years later, the UN General Assembly passed a resolution directing the International Court of Justice to offer its opinion on the “legal consequences” for Israel. Even though the ICJ has no power to enforce its opinions, Israel lobbied hard to defeat the resolution—which was passed by an 87-26 margin.

FYI, the US, UK and Germany voted ‘no’—while the 53 countries that abstained included India. What’s interesting: Ukraine didn’t even show up for the vote despite a full-press campaign by Tel Aviv. The reason: Kyiv wants weapons and defence systems in exchange for its vote—which Israel rejected. (Agence France-Presse via France 24)

BCCI preps for the  World Cup

The 50-over World Cup will be held in India later this year. The cricket board laid out its plan to help us take the big prize—after a 10-year drought. It has shortlisted 20 players who will play for the national team in rotation before the tournament. And the fitness of these players will be closely monitored during the IPL season. Many players who were declared fit had to be benched due to injuries during past tournaments. A frustrated Rohit Sharma said:

We need to try and get to the bottom of it. I don't know what exactly it is. Maybe they're playing too much cricket. We need to try and monitor those guys, because it's important to understand when they come for India, they need to be a 100%, in fact more than 100%.

But, but, but, as Indian Express points out, this puts the board on a collision course with the IPL franchises—who may not be willing to “rest” players in national interest. (The Telegraph)

Meanwhile in football: Cristiano Ronaldo’s finances just got a massive boost. He signed a two-year contract with the Saudi club Al-Nassr—and will be paid $75 million a year for his services. Yes, Ronaldo will be relegated to playing in a regional club—albeit a top-rated one. But his rival for GOAT status—Lionel Messi—has been just as happy to sign up as a tourism ambassador for the Saudis. Look out for a 2030 World Cup bid. Recommended good read: Jonathan Wilson in Sports Illustrated on the end of Ronaldo’s professional career. (New York Times, paywall, ESPN)

Will 2023 bring us a new war—this time in Southeast Asia? North Korea is certainly hell-bent on forcing a confrontation. President Kim Jong Un called for an “exponential increase” in the country’s nuclear weapons arsenal—right after it tested “a large, nuclear-capable, multiple-launch rocket system” that could target all of South Korea. FYI, in 2022, Pyongyang tested more missiles than at any time in North Korean history—including an intercontinental ballistic missile (ICBM) that could potentially strike the US mainland. (CNN)

The Organised Medicine Academic Guild—which is made up of 15 medical associations—urged for “science, sanity” to prevail over “scare-mongering”. This is in reaction to a recent claim by the Indian Medical Association (IMA), signalling “an impending Covid-19 wave”—and multiple warnings issued by the government. Most experts agree that Indians are relatively protected:

India’s population is largely protected from the existing coronavirus variants, which are primarily siblings or sublineages of the omicron variant that caused India’s third wave in January 2022. India’s advantages emerge from natural Covid-19 infections over the past two years that scientists believe affected over 90% of the population, and high vaccination coverage with over 75% of the adult population having received two doses and 28%, three doses.

The Telegraph has more details.

In alarming virus-related news: According to Politico, most current treatments for Covid are ineffective against new Omicron variants.

Where in the world is the US ambassador?

India has not had a US ambassador for nearly two years. And the chances of getting one in the near future look remote. President Biden had nominated Eric Garcetti—who has been waiting 500 days to be confirmed. Garcetti is unpopular with both the Republicans and Democrats. The reason: Garcetti is accused of ignoring sexual harassment charges against his top aide as LA mayor. FYI: New Delhi has no opinion on the matter. There have been 6 interim appointments since former US ambassador Kenneth Juster’s departure in January 2021.

Why this matters: The failure to appoint to an ambassador to a critical country speaks volumes about the toxic state of US politics:

It’s becoming increasingly common for senators to hold them [appointments] up solely to score political points against the White House — often over issues that aren’t remotely related to the nominee in question.

The first of its government survey reveals that 15.8 million children between the ages of 10 and 17 are addicted to drugs and alcohol in India. The consumption of alcohol is predictably higher in men than women:

“For every one woman who consumes alcohol, there are 17 men consuming alcohol. Among alcohol users, country liquor or 'desi sharab' (about 30%) and spirits or Indian Made Foreign Liquor (about 30%) are the predominantly consumed beverages.

Key point to note: The results indicate a shift from low-potency natural drugs like bhang to stronger stuff like heroin. (Deutsche-Welle)

Musk is the first human on the planet to lose $200 billion—according to Bloomberg Billionaires Index. The key reasons for this precipitous fall: Tesla shares—which have dropped 65% in value in 2022—losing 11% just last Tuesday. Musk insists Tesla will be the “most valuable company on Earth”—and he isn’t too worried. Maybe because he is still worth $137 billion. (Huffpost)

Julia Misley claims that the singer sexually abused and exploited her over a three-year period when she was Tyler’s girlfriend. She was 16 at the time. Tyler himself boasted in his memoir that her parents gave Tyler legal custody of Misley “so I wouldn’t get arrested if I took her out of state.” These allegations aren’t new and have been reported before. But Misley has now filed a lawsuit under a 2019 California law that gave survivors three years to sue over child sexual abuse that occurred decades ago. That window closed on December 31. (Rolling Stones, paywall, Associated Press)

Here’s some good news for Tolkien fans. The author will soon be honoured on a commemorative coin issued by the UK Royal Mint. The £2 coin will include Tolkien’s monogram which is touted as “a mysterious symbol redolent of alchemical signs and magical scripts.” Well, it’s certainly pretty. (Royal Mint) 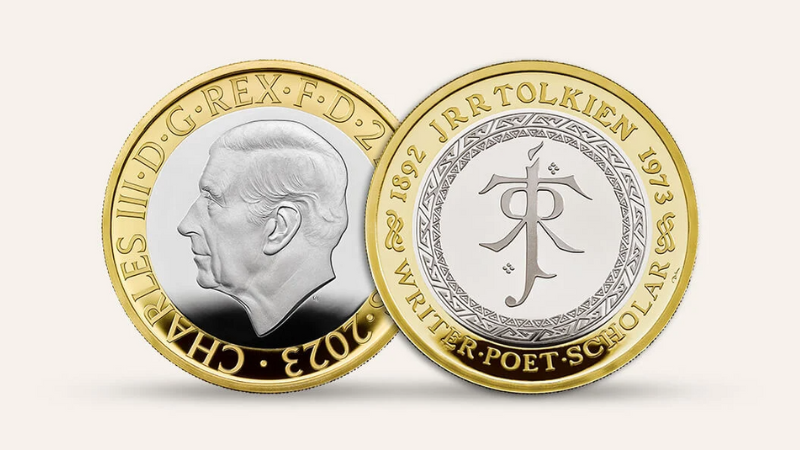