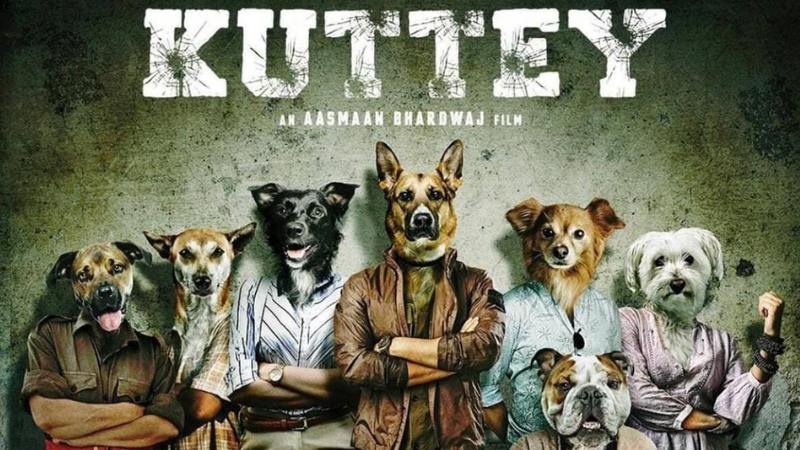 Trial by Fire: This limited series revisits the 1997 Uphaar Cinema fire tragedy—which killed 59 people trapped in the theatre. The story is inspired by a book of the same name—and explores the tragedy through the eyes of Neelam and Shekhar Krishnamoorthy—who lost their children to the fire. The film traces their 24-year quest for justice. If you’re a fan of Abhay Deol, this is an opportunity to check out one of his rare releases. But this is not a light-hearted watch. There are no reviews for the series but you can check out Deol’s interview over at FilmCompanion. All seven episodes are available on Netflix.

Kuttey: ‘Kuttey’ is the directorial debut by Aasmaan Bhardwaj—son of veterans Vishal and Rekha Bhardwaj. This is a dark comedy that follows the main characters on the hunt for trucks filled with cash. They cross paths on a rainy night on the outskirts of Mumbai—and spend the rest of the film trying to outwit one another. We would watch this one purely for the stellar cast—which includes Arjun Kapoor, Tabu, Konkona Sen Sharma, Naseeruddin Shah, and Kumud Mishra.

The reviews for the movie are mixed. Indian Express is disappointed with this “wannabe Tarantino-Ritchie caper”—and slams Bhardwaj Jr for not living up to his father’s legacy, i.e ‘Kaaminey’. FilmCompanion is just as harsh about the “monotony and the clichés.” But the Times of India is kinder—saying ‘Kuttey’ is “thrilling and entertaining, but not without loopholes and flaws in the writing that clearly struggles with the problem of plenty.” We would still head to the theatres just for Tabu and Konkona. ‘Kuttey’ dropped yesterday.

Break Point: This is a new series from the producers of wildly popular ‘Formula 1: Drive to Survive’. It offers a close up look at the “next gen” of tennis stars—Nick Kyrgios, Matteo Berrettini, Sloane Stephens—who are challenging legends like Djoko and Nadal. The cameras follow them from one tournament and hotel room to another—as they grapple with their hopes, fears and disappointments.

The Guardian says the series’ greatest strength is that it is unexpectedly dark—capturing the loneliness of a sport that locks each player inside their own bubble: “a bleak, bracing ride; a whirl of luxury hotels and locker rooms and brightly lit stadiums with absolutely nowhere to hide.” Variety is more matter-of-fact in its assessment, calling it a “pleasingly watchable sports serial” with “ultimately rootable figures.” This is a must-watch for anyone who follows tennis—or is intrigued by the unseen side of professional sport. The first half of the series—five episodes—dropped yesterday. Oddly, the remaining won’t be out until June.

The Makanai: Cooking for the Maiko House: This nine-part series is produced and co-written by Hirokazu Kore-eda—who won the Cannes’ Palme d’Or for ‘Shoplifters.’It  follows two friends—Kiyo Nozuki and Sumire Herai—who move to the big city Kyoto from their village to pursue their dreams. Aomoroi and Kiyo become maikos (apprentice geishas)—but Kiyo soon finds that she’s not geisha material—and becomes fascinated by cooking instead. The result is an intimate look at the everyday life in a geisha house.

AV Club appreciates its rare subtlety in an entertainment landscape that prefers the obvious: “It seems like an entirely different sensibility from most television fare—and it’s a welcome one.” Hollywood Reporter describes the show “as cozy and comforting as a home-cooked meal”—its individual episodes serving up “a slice-of-life intimacy.”

Given the credentials of the director and the fact that the series is based on the popular manga series, this one is definitely worth checking out—with a pile of snacks just in case all that food on the screen makes you hungry. The series is streaming on Netflix right now.