Gautam Adani may soon own 55% of the television channel—without the consent of its founders, Prannoy and Radhika Roy. Here’s how this went down:

The Roys put out a statement saying the acquisition was executed without their knowledge or consent. They still hold 32.36% of the company. Indian Express has the clearest version of the attempted takeover. The Telegraph has more on the roots of NDTV’s woes.

Key point to note: The securities regulator SEBI had flagged the VCPL loan back in 2018, saying: “the takeover exercise has been conveniently couched as a loan agreement with the predominant intention of the Noticee (VCPL) being to acquire control over NDTV.” SEBI ordered VCPL to make an open offer for NDTV—which was then overturned by a tribunal. So we’re not sure why the Roys were taken by surprise.

Big point about Adani: A new credit rating report warns that his group is “deeply leveraged” and in danger of defaulting on its debts:

“The investments are predominantly funded with debt, resulting in elevated leverage which has ‘understandably caused concerns about the Group as a whole… In the worst-case scenario, overly ambitious debt-funded growth plans could eventually spiral into an enormous debt trap, and possibly culminate into a distressed situation or default of one or more group companies.’”

The Court agreed to hear a petition filed by CPM leader Subhashini Ali and two others—challenging the Gujarat government’s decision to release 11 rapists and murderers in the case. A separate petition has been filed by Trinamool MP Mahua Moitra, as well. The petitions claim the decision violates the union government’s 2022 remission policy—that specifically excludes those convicted of rape and/or serving a life term. (The Telegraph)

Covid: New research suggests that exercising for at least 20 minutes a day lowers the risk of Covid—and serious illness from the disease: “A weekly total of 150 minutes of moderate-intensity or 75 minutes of vigorous-intensity physical activity appears to afford the best protection.” (The Guardian)

Memory loss: A new study shows that zapping the brain with electrical currents can boost memory for at least a month. Experts say the findings are “quite remarkable”—and offer great hope for older adults at the risk of dementia. Here’s how the experiment worked. Participants wore a cap fitted with electrodes and then:

“Using the cap, the researchers delivered a weak electrical current to participants’ brains while asking them to recall five lists of 20 words. The process was done for 20 minutes on four consecutive days… The study found that memory performance improved by approximately 50% to 65% in participants who received the four-day intervention.” (NBC News)

Twitter verification: Twitter is testing a new badge for users who have verified their phone numbers with the platform—presumably to authenticate their identity, or as Twitter puts it, “add context to their accounts.” The grey badge will be shown on your profile—like this. Right now, it’s an opt-in feature—and it's unclear when it will be rolled out. (TechCrunch)

Apple in India: The company plans to begin manufacturing the iPhone 14 in India about two months after its initial release out of China. Ramping up operations in India will shorten the lag in production of the new iPhone—from the typical six to nine months for previous launches. The bigger plan is to simultaneously ship Apple products out of both India and China—and reduce the company’s dependence on China. For now, the first iPhone 14s will be released in September—and be available in late October/ November—with hopes of a big Diwali release on October 24. (Bloomberg News)

Insta clones BeReal: Mark Zuckerberg is once again intent on copy/pasting a successful new product, in the hopes of killing it. BeReal is the buzziest app among the GenZ because it favours authenticity over the staged Insta images. Here’s how it works:

“[The app] sends a notification to its users at a random time of day, giving them two minutes to take both a rear-facing photo and a selfie simultaneously. It’s a format that’s supposed to encourage the sharing of authentic images from people’s days, rather than the kinds of carefully curated content that Instagram is known for.”

The newly released Instagram Candid does exactly the same thing—making it what some call a “murder clone.” The Verge has more details on the Insta rollout.

The Chinese government is infamous for altering Hollywood movies to suit its ideological ends. The latest victim is ‘Minions: The Rise of Gru’—which ends with a teenage Gru taking off with his mentor Wild Knuckles, marking his first steps toward becoming a supervillain. In the Chinese version, Wild Knuckles ends up in jail while Gru becomes one of the “good guys” who returns to his family, and raises three kids. All this achieved by a series of subtitled still images in the credits sequence. (BBC News)

One: This is pretty much why Indian election outcomes send exactly the wrong message for a country that claims to be a democracy. Union Minister Ajay Mishra Teni’s son infamously ran over and killed a number of protesting farmers in UP (explained here). Yeah, he may be still in jail, but the BJP swept all eight assembly seats in Lakhimpur Kheri–whose MP is none other than Teni Sr. No wonder, this is how he’s talking about his son’s alleged crime in public—and on camera. If you don’t speak Hindi, just listen for the word ‘kutte,’ as in dogs.(NDTV)

Two: Aww, the James Webb telescope has wowed the world again. This time, the images are not of a distant star or galaxy but our very own neighbourhood giant, Jupiter. NASA has all the nerdy details on what you can see in this and other photos of the planet. We’re content to admire the level of lovely detail. 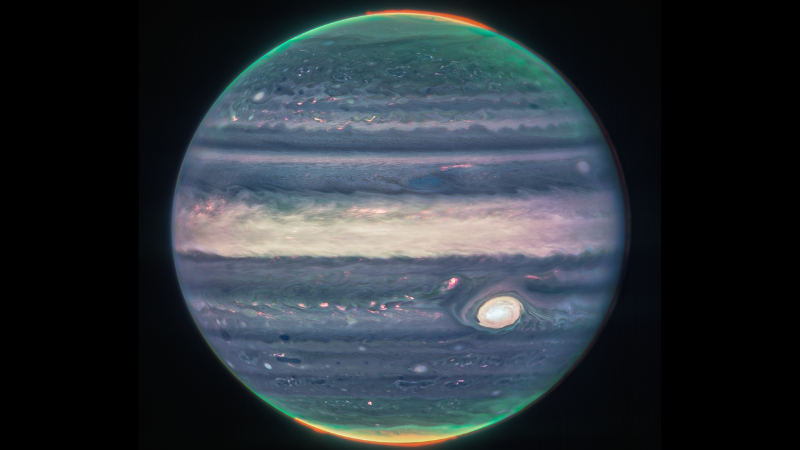 Three: Oh, look it’s a bull run—at a bank, no less! No one knows how it got onto the premises of Bank Leumi in Lod, Israel. In the end, it was successfully stunned by a vet and taken away. Can we just say this clip below does very little for the Israeli reputation for clinical efficiency lol! (Times of Israel)