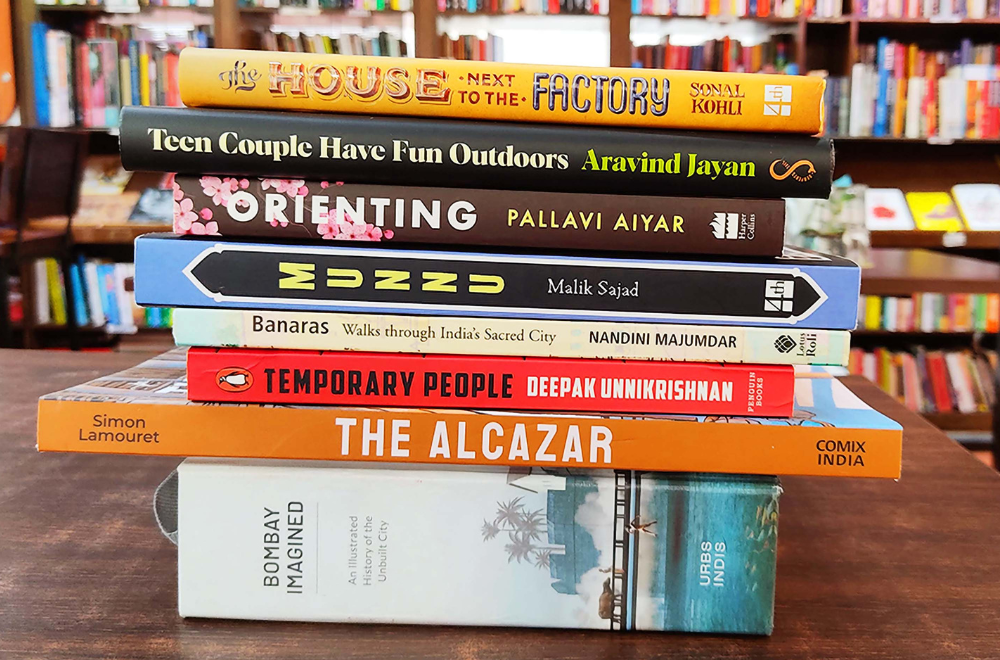 Life in the city

This July, we thought we’d travel with our bookshelves across some of the cities of India, and follow some Indian writers and characters outside the country. In these books—whether satire, memoir, or graphic novel—discover new cities from new perspectives or view familiar places with fresh eyes!


The House Next to the Factory

In Sonal Kohli’s collection of short stories, we travel to Delhi—and through decades—following the lives of a group of people who live in the house next to the factory. Through interlinked stories set across time, we glimpse into the lives of its inhabitants, which include grandchildren, tutors, cousins, and lovers.

Journalist Pallavi Aiyar takes us to Tokyo in ‘Orienting’, a work of travel writing and reporting of her time in a new country. She writes of misadventures and cultural differences and explores the complex relationship between India and Japan, with humour and heart.

In the tradition of ‘Maus’ and ‘Persepolis’, ‘Munnu’ by Malik Sajad is a moving graphic novel composed of black-and-white illustrations. It follows the life of a young boy growing up in Kashmir, his childhood in a time of violence and conflict and his coming-of-age in a politicised city. ‘Munnu’ offers us a complex, nuanced view of a region and city through the eyes of its young protagonist.

Deepak Unnikrishnan’s ‘Temporary People’ highlights the life experiences of a group of people we don’t normally see—the “guest workers” of the Gulf, the invisibilised labour that builds the cities people live in. In this evocative collection of short stories, we meet characters who straddle the space between the UAE and Kerala, but are never able to call either place home.

In this beautiful book, author Nandini Majumdar offers readers a guide to wandering through the city of Banaras. Sectioned into twelve different walks that will take you across the city and allow you to explore it in all its rich texture and colours, this book is a must-have guide while travelling through Banaras—or a great way to travel through its pages.

In this extraordinary book by Robert Stephens, we see two hundred “unrealised urban visions” of Bombay. With anecdotes dating back to 1670, drawings from the archives and contemporary speculations, these are imaginations of lost futures of Bombay, from its past. Beautifully designed, we see the ideas that built the city into what it is today—and the many visions for what it could have been.

The graphic novel ‘The Alcazar’ is the story of a construction site in Cooke Town, Bangalore. Emerging from French-born graphic novelist Simon Lamouret’s visit to the city and his interactions with construction workers, this is a vivid exploration of multiple themes—class, labour, power and skill, anchored in a Bangalorean neighbourhood.

Aravind Jayan’s debut novel is set in Trivandrum, in a typical middle-class Indian family, whose lives are thrown awry when a scandalous clip of their eldest son goes viral. Narrated by his younger brother, who finds himself in the un-envious role of middleman, this is the humorous and insightful story of intergenerational conflicts and values, the power of gossip and the concept of shame and honour. (And we've got signed copies of the book!)