Thank you for all your support and love in 2022. We truly could not have done it without you. The splainer team wishes you a wonderful holiday season—filled with laughter and good company! We will see you in 2023.

We’re going on vacay! A reminder that the splainer team will take our annual year-end break—starting Saturday, December 24. We will be back on Monday, January 2, to ring in the new year with you! We can’t wait for our personal sanity break from the daily news cycle:)

This weekend’s Advisory: is also our last edition of 2022—and drops a day early on Friday around 9:30 am! Look out for a wonderful excerpt by Jerry Pinto from the book ‘Indian Christmas: An Anthology’—about his childhood memories of a ‘chutnified’ Christmas in Mumbai. We also have family recipes from the splainer team, a corny Christmas playlist and the best books of 2022! And as usual, we recommend the best stuff to binge-watch over the holidays.

The Ukrainian president got a royal welcome in the United States—where he met President Biden and addressed Congress. Veep Kamala Harris and House Speaker Nancy Pelosi hoisted a Ukrainian flag from the battlefield signed by soldiers—gifted to Congress by Zelensky. And Pelosi compared Zelenskyy’s visit to that of Winston Churchill in 1941—when he urged the US to join the war against Nazi Germany. Yup, it was all a bit over-the-top.

Among the ‘return presents’ Zelenskyy will take back with him: $1.8 billion in aid plus Patriot missile defence system. It is his first foreign trip since the invasion of Ukraine. (Associated Press) 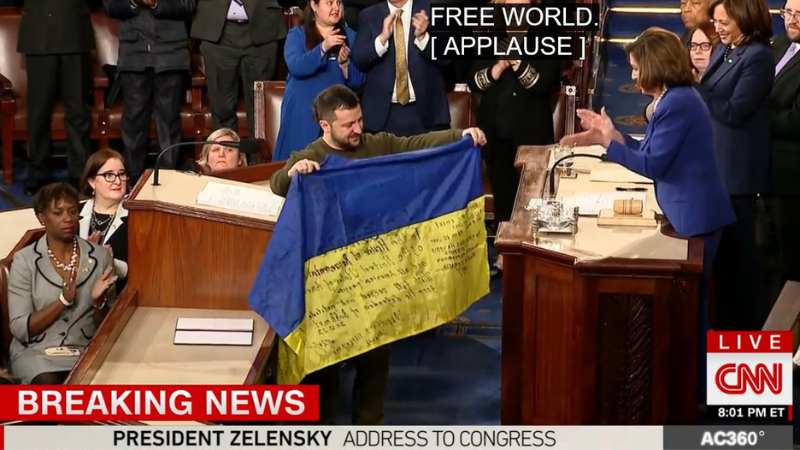 New Covid guidelines at the airport

Concerned by the surge in cases in China and worry over new strains, the government has urged citizens to re-embrace safety rules at the airport—including social distancing and masks. Authorities will begin randomly testing international passengers, as well. It has also asked states to be more vigilant in tracking new strains. Also cautioned: Rahul Gandhi’s Bharat Jodo yatra. Its organisers have been told participants must wear masks and be vaccinated—though those rules don’t seem to apply to election rallies:) The Telegraph has more on why Indians don’t have much cause to worry. That said, we personally recommend masking up to avoid ruining your holidays. (Indian Express)

The good news about Covid: Researchers may have discovered an effective treatment to one of the debilitating symptoms of long Covid: brain fog. Patients were given a mixture of the ADHD drug guanfacine and an antioxidant called N-acetylcysteine (NAC)—which is mainly used to treat paracetamol overdose and respiratory illnesses. These are results of a small study, but the lead researchers are urging doctors to prescribe guanfacine to people who need help right now. (MSN)

Meanwhile, in the UK: Any new surge in Covid cases is likely to be disastrous with the entire medical staff in revolt over pay hikes. The nurses staged a walkout earlier this week—and have now been followed by ambulance workers. (Sky News)

The naval vessel HTMS Sukhothai—carrying 105 crew members—capsized early Monday. In the end, six people lost their lives—and 23 are still missing. Officials have now admitted that there weren’t enough life jackets on board. But Royal Thai Navy Admiral Cherngchai Chomcherngpat claimed, “With or without life jacket (it) doesn’t affect the odds of surviving”—pointing out that 18 of the 30 without life jackets were rescued. Well, that must make it alright then. (CNN)

Newly released records from a long-running sexual harassment lawsuit exposed the toxic underbelly of the world’s most famous shoe company. These internal surveys of women employees reveal stories that have become far too familiar:

In one survey, obtained by the Business Insider, an employee wrote that she had been directed by male co-workers to “dress sexier”; another identified certain executives as “well known philanderers with lower level employees whom they exert influence and power over”. In a third entry, an employee said that she had witnessed a male executive receiving oral sex from a lower-ranking female in the company gym. Another alleged that “sloppy drunk” men embraced female co-workers or invited them to “work dinners.”

Some of these complaints were leaked to the media back in 2018. The company sacked a bunch of male executives—blaming it on an “insular group of high-level managers, in pockets of the organisation” who had “protected each other and looked the other way.” But the surveys suggest that the pattern of harassment was far more pervasive. FYI: the number of women vice presidents at the company has jumped since from 36% to 43%. (Business Insider, paywall, The Guardian)

A big blow against ‘forever chemicals’?

Manufacturing giant 3M has announced that it will stop producing per- and polyfluoroalkyl substances (PFAS) by the end of 2025. These ‘forever chemicals’—used to make products ultra-durable and water-repellent—don’t degrade in the environment or our bodies. They are connected to all sorts of toxic diseases including cancer, both in humans and animals. And since 3M makes everything from tape to medical masks to electronic components, it’s kind of a big deal.

The company has faced thousands of lawsuits over PFAS—and is on the hook for billions of dollars. 3M seems to have decided that shutting down its manufacturing facilities is a lot cheaper. For now, it isn’t clear if 3M will stop using PFAS—or just stop making it. But it is still a big win for one reason: “PFAS is no longer profitable.” (Gizmodo)

The financial cost of chronic illness in India

The first-ever population-based study found that 30% of Indians between the ages of 45 and 64 either stop or cut back on employment due to chronic illnesses. Health issues, in general, accounted for a staggering 58% of people who had quit work for more than a year. Why this matters: this is the first time we have hard data on the financial impact of poor health among older Indians. (The Telegraph)

A new study revealed signs of the disease in the corpses of stranded dolphins—which has never before been seen in species other than humans. We don’t know if these brain lesions create the same cognitive deficits as in humans, but it could explain mass strandings—where groups or pods of whales and dolphins run aground in shallow water: “Alzheimer’s-like signs in the brain could support a “sick leader” theory, whereby mostly healthy cetaceans are stranded because they follow a group leader that has become confused or lost.” (The Guardian)

The outrage over ‘Besharam Rang’—the song from Shah Rukh Khan’s upcoming flick ‘Pathaan’—took a nasty turn. Paramhans Acharya threatened to burn Khan alive: "Today we burnt his posters. The movie Pathaan has insulted the saffron colour. If I find jihadi Shah Rukh Khan anywhere, I will burn him alive." Yes, all this because Deepika Padukone’s wearing an orange bikini in the music video. See the speech below. (Hindustan Times)

One: A Royal Bengal tiger swam 120 km across the Brahmaputra river—ending up in a narrow cave on the tiny Peacock Island. It was carefully tranquilised and moved to the state zoo. The tiger will eventually be sent back to where it most likely came from—the nearby Orang National Park. You can see it in the river below. (NDTV)

Two: Male students at Nangarhar University walked out of their exams in protest against the Taliban’s heartbreaking ban on women in higher education. This poignant tweet from a female student pretty much sums it up: "We came to the university at 6:30 in the morning, the boys were allowed to enter and they pointed guns at us and told us to go home." Watch the men walk out below. (France 24)

Three: This clip of a passenger’s altercation with an air steward on an Istanbul-Delhi IndiGo flight went viral. The point of contention: he wanted a sandwich that wasn’t immediately available. (NDTV)