President Gotabaya Rajapaksa fled the country on a military aircraft on a day he was expected to announce his resignation. Apparently, he wanted to ensure his safety before he stepped down. According to some media reports, he is now in Maldives. While Gotabaya was able to leave after a 24-hour standoff with immigration authorities, his brother and former finance minister Basil wasn’t as lucky.

As promised, the company has filed a lawsuit in a Delaware court to force Elon Musk to make good on the $44 billion deal to buy Twitter. On Friday, Musk announced that he was walking away—and doesn’t plan to pay the $1 billion termination fee either. According to the lawsuit:

“Having mounted a public spectacle to put Twitter in play, and having proposed and then signed a seller-friendly merger agreement, Musk apparently believes that he—unlike every other party subject to Delaware contract law—is free to change his mind, trash the company, disrupt its operations, destroy stockholder value, and walk away.”

Musk’s only response so far is a tweet: “Oh the irony lol.” Expect a lengthy court battle that will likely further damage Twitter’s stock price—which is already trading 37% below Musk’s offer price. (CNN)

A local UP court sent the Alt News co-founder to 14 days in judicial custody—on an FIR filed in Lakhimpur Kheri by a Sudarshan TV journalist. The offending tweet fact-checked an image shared on the channel—which is now being framed as “false news” and “promoting enmity between groups.” The Supreme Court, however, extended interim bail in another UP case—for a separate tweet that called three Hindutva leaders “hatemongers.” But the upshot is that he is still in jail—because of the Lakhimpur and Delhi cases. Meanwhile, the UP government has formed a Special Investigation Team to investigate six cases registered against Zubair in Sitapur, Lakhimpur Kheri, Hathras, Ghaziabad, and Muzaffarnagar.

Amazon is developing a cancer vaccine

Now that’s a headline you don’t expect to read. But it’s true. The company is developing vaccines for breast cancer and melanoma skin cancer—in partnership with a leading cancer centre in Seattle. These “personalised” vaccines—developed with the use of machine learning—offer a “precise cancer treatment at a more affordable price, becoming a better alternative to chemotherapy, which takes a more generalised, one-size-fits-all approach.” The vaccine is still in the first stages of development. Why this is notable: it is the first known case of Amazon developing a drug—though it has bet big on healthcare with an online pharmacy service, in-house diagnostics lab, and a health-tracking device called Halo. (Insider, paywalled, or Daily Mail)

Also doing something useful: Meta—which announced a new AI tool called Sphere. It can automatically scan information—and verify its accuracy—and suggest an alternative source, if possible. The first user will be Wikipedia, which has the burden of fact-checking its massive trove of records—that are being amended all the time. You can see how it works below. (TechCrunch)

In other health-related news: A 17-year study revealed that teenagers and young adults who drink alone are 35% more likely to become alcoholics by the time they hit their mid-thirties. For adolescent women, the odds are higher by a staggering 86%. CNN has a more granular breakdown by age and gender.

Ok, this isn’t exactly a breaking development, but it was certainly news to us. Gir sanctuary lions are moving into coastal areas due to increasing numbers—accompanied by shrinking natural habitat. They usually follow the Heran river—which passes through the Gir forest—to the Arabian sea in Somnath district. There are at least 104 lions—of a total of 275 in the state—that now live close to the beaches. The good news: there have been no reports of human-animal conflicts. (BBC News)

Speaking of animal invasions: Brits are far less happy about sharing space with grey squirrels—which are an invasive species brought over from North America. They also pose a grave threat to the native red squirrel. Scientists have now come up with a novel solution: oral contraceptives:

“The mass birth control plan involves luring grey squirrels into feeding boxes only they can access, using pots containing hazelnut spread. These will be spiked with contraceptives. The project could help eradicate the grey squirrel in the UK without killing them.”

What’s notable: if successful, the same humane strategy could be used to deal with other pesky species, including rats, mice, deer, and wild boar. (BBC News)

Speaking of more dangerous pests: New research shows that mosquitoes are attracted to humans infected with viruses that cause Zika or dengue fever. These diseases raise the level of a compound called acetophenone—which changes how they smell. Why this matters: This increases the odds that mosquitoes are biting infected humans—and hence making the disease more likely to spread. The good news: The scent can be blocked with isotretinoin, an anti-acne medication also known as Accutane. (NBC News)

Which is the funnest city of them all?

According to the latest Time Out Index, the #1 spot goes to Edinburgh, followed by Chicago, Medellín (Colombia), Glasgow and Amsterdam. The key criteria: thriving nightlife, amazing food and drink, art, culture and museums. Given that there are two Scottish cities in the top five, we’re guessing decent weather wasn’t a requirement:) Also: Medellín? Indians can take heart at the fact that Mumbai came in at #14 and Delhi at #26—ahead of Rome, Paris, Istanbul, Singapore and Sydney. (Time Out)

One: NASA released the first five images taken by the James Webb Space Telescope. The first image is the highest-resolution picture of the universe ever captured—and shows a 4.6 billion year old galaxy cluster called SMACS 0723. An awe-inspiring fact to keep in mind about the image shown in the wonderful clip below: “This slice of the vast universe covers a patch of sky approximately the size of a grain of sand held at arm’s length by someone on the ground.” You can see all the images over at Quartz. Also read: The Telegraph’s profile of Jesse Jose who is one of two Indian astronomers with observation privileges on the telescope. Wondering why this telescope is a big deal? Our excellent Big Story has all the details.

Two: On Monday, the PM unveiled a bronze statue of our national emblem—the Ashoka lions—that will sit atop the new parliament building. But the appearance of the lions has triggered great hue and cry—and many accuse the government of “distorting” the emblem. The reason: The usually calm lions have an unusually ferocious look. Opposition leaders claim the original is “graceful, regally confident” while the new one is “snarling, unnecessarily aggressive and disproportionate.”

One of the artists involved in making the sculpture says the lions only look ferocious because of the viewing angle: “If you look at the Sarnath ‘Lion Capital’ from below, it will look the same as the Parliament emblem does.” You can compare them below for yourself. (The Telegraph) 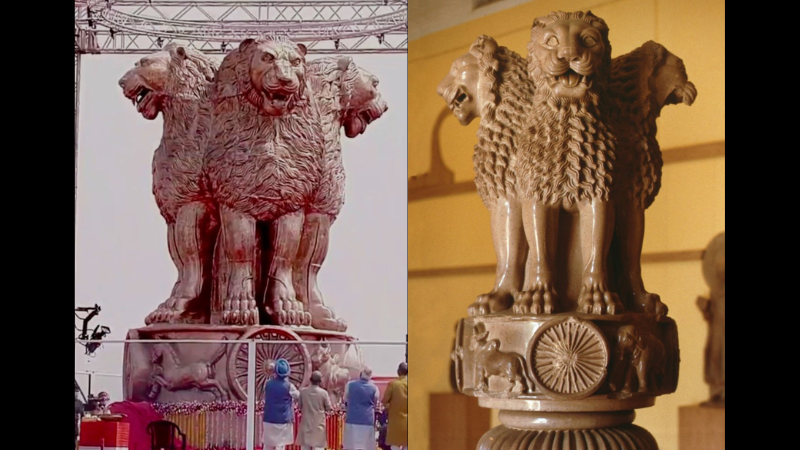