Related things to see: Ukrainian fighter pilots have launched a fundraising campaign to buy fighter planes. This is partly because NATO has been reluctant to supply them fearing Russian retaliation. See the campaign video below:

Is the damn virus coming back?

On Monday, India added 2,183 new cases—recording a 90% jump in numbers. But much of this spike had to do with Kerala reporting a backlog of 940 cases after a five day gap. But there is still cause for concern with Maharashtra and Haryana reporting triple digit increases in infections in recent days. Also this:

Point to note: For now, experts attribute the spike to relaxing of Covid restrictions—and not any particular variant. Also read: Mint on the surge in Delhi. (The Telegraph)

Meanwhile, in Shanghai: The city reported its first Covid deaths—three unvaccinated elderly patients—due to the current wave. On Monday, China reported 23,362 new cases—most of them asymptomatic and almost all in Shanghai. (NPR)

The collapse of the country’s economy has devastated hospitals—which are running out of essential supplies—which include medical drugs, anaesthetic drugs, implants, suture materials. The country imports 85% of its medical supplies—but its foreign currency reserves are at an all-time low. But the government has been reluctant to admit to shortage—even as frontline doctors raise the alarm:

“‘In two weeks' time we may have to stop most surgeries and only do emergencies,’ he told me as he reeled off a list of essentials like IV fluids, paracetamol, and antibiotics that his team are struggling to get hold of. ‘There may be a time when we have to even stop treating cancer patients.’”

Mobs of Hindu men attacked Muslims in two parts of Vadodara—without any apparent provocation. In both cases, the men were asked to reveal their names to confirm their religion before the attacks ensued. See the victims below: 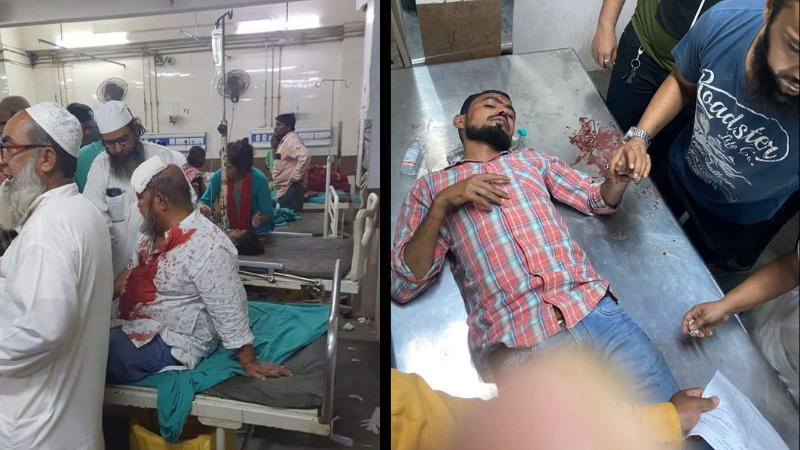 A much bigger clash between the two communities—triggered by a road accident—led to the desecration of a temple. So far, 20 people have been arrested in connection to the riot.

Also this: The police have arrested five people in the state for trying to hoist a saffron flag on a mosque during the Hanuman Jayanti procession—which was staged without permission. See the flag-hoisting below.

Meanwhile, in Khargone: Muslim residents have moved the Madhya Pradesh High Court to challenge the demolition of their homes—which were razed soon after a Ram Navami procession ended in violence. (The Hindu)

Speaking of Muslims: Article 14 analysed the results of the delimitation exercise in Kashmir—which redrew the borders of the election constituencies. Here’s the conclusion:

“Our analysis of the delimitation commission’s final report found the alteration of boundaries has made the Hindu vote a decisive factor in more constituencies than before. Areas with substantial tribal and scheduled caste (SC) populations have also been redistributed between constituencies—discarding ease of access and public convenience—in such a way that it would reduce the electoral influence of Muslims.”

We recommend reading the Article 14 analysis for more.

Okinawa Autotech has recalled 3,215 of its Praise Pro electric scooters due to a spate of fires—likely related to battery issues. There have been three such incidents since October—and Ola Electric, Pure EV and Jitendra EV have also had their share of mishaps in recent weeks. We recently did a Big Story on EVs—which included a look at safety issues. (Economic Times)

The football superstar and his partner Georgina Rodríguez announced that they were expecting twins in December—a boy and a girl. Yesterday, the couple revealed that their baby son died during childbirth—due to unspecified reasons. Ronaldo has four other children—including a four-year old with Rodríguez. (The Guardian)

One: We now have more leaked news about Twitter’s planned ‘edit’ button—which will initially only be available for Twitter Blue users:

It’s not clear how it will look to a user, but the clip below shows how the feature will show up on the menu. (Mashable)

Two: WhatsApp is rolling out a beta feature all of us are secretly yearning for—a tool that allows you to hide your ‘Last Seen’ status, profile photo, and ‘About’ information from a specific contact. You finally have a way to avoid the more annoying folks in your contacts. This is already available on Android and can be accessed on iOS by going to Settings > Account > Privacy. (Indian Express)

The Allahabad High Court had granted bail to Ashish Mishra—son of Union Minister Ajay Mishra Teni—who was arrested for running over farmers with his car during a protest in February. The Supreme Court has now struck down his bail—and ordered him to surrender within a week. FYI: The UP government argued in favour of Mishra’s bail—insisting he is not a repeat offender or a flight risk. (NDTV)

The mystery of one-hit wonders

Stanford psychologist Justin Berg looked at more than three million songs released from 1959 to 2010 and listed the biggest hits. He then used an algorithm to measure the songs’ features, including key, tempo, and danceability. Berg used that to look at how  different a given hit is from the pop music landscape at the time (‘novelty’)—and the musical diversity of an artist’s body of work (‘variety’). Here’s what Berg found: Novelty is riskier but holds the key to long-term success:

“Being very different from the mainstream is really, really bad for your likelihood of initially making a hit when you’re not well known. But once you have a hit, novelty suddenly becomes a huge asset that is likely to sustain your success.”

But once an artist becomes popular for a certain kind of sound, their fans want them to stick to it: “Nobody wants Bruce Springsteen to make a rap album.” The Atlantic has more on this intriguing research.

One: A college football team—for University of Central Florida—unveiled what may well be the future of professional sports: QR codes on team jerseys. Scanning one with your phone camera takes you to the player’s page which includes their deets and merch. Now waiting for QR codes on IPL players that takes you to a CRED ad. (CBS Sports)

Two: Tuscany is witnessing a bizarre tussle between the Catholic church on one side and the local council. At issue is a stunning fresco of a pregnant Virgin Mary painted back in 1460 by the Renaissance master Piero della Francesca. The Madonna del Parto originally adorned the wall of a chapel—and survived two earthquakes before being moved to a museum. But a court has now ordered that it be relocated back to its original location—which now sits in the middle of a cemetery among 3,000 graves. The mayor is flatly refusing to do so. (The Guardian) 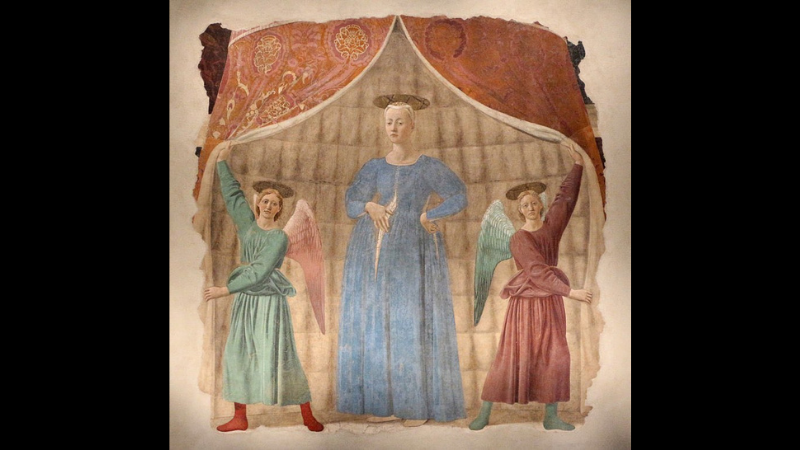 On the latest episode of the splainer podcast ‘Press Decode’, the splainer team looks at Punjabi music’s dominion over Indian pop culture—and the messy history of ancient monuments. Be sure to head over to the IVM website, Spotify or Apple Podcasts to listen to it.