In the UK: The Tory party announced its rules to select its next leader—and prime minister of the country. To cull the herd vying for the top job, the bar for qualification has been set higher. The number of MPs that a candidate needs to get in the race has been upped from eight to 20—and they will need at least 30 votes to get past the first round of voting. At present, only Rishi Sunak and Penny Mordaunt qualify. There will be a new occupant in 10 Downing Street by September 5. The Guardian has more details.

Something to watch for: The race for the top post is getting dirty. The Telegraph UK (paywalled) revealed an anti-Rishi ‘mucky memo’ is doing the rounds of WhatsApp groups. The 424-page salvo accuses him of “arrogance, indolence, ignorance”—and calls him a “liar” and a “schoolboy.” According to unnamed Tory sources, “It’s coming from that Thatcherite wing of the party that was loyal to Boris.” Not helping matters, this clip of him as a student in his final year at Oxford University. Well, this one is a definite self-goal:) Deccan Herald has the highlights of the Telegraph story. Also: We did a Big Story on Sunak when he got caught in a tax-dodging scandal involving his wife, Akshata.

Meanwhile, in Sri Lanka: The speaker announced that the parliament will vote to elect a new president on July 20. Current prez Gotabaya Rajapaksa is still missing in action. The speaker claimed he was in a “nearby country”—and then claimed he’d made “a mistake.” Prime Minister Ranil Wickremesinghe, however, emerged from hiding to make a televised speech—slamming those who burnt his house down. He accused them of a “Hitler-like mindset”—and claimed they had been egged on by a TV channel spreading fake news. The Hindu has more on the political stalemate in SL.

A UN report predicts that India’s population will exceed that of China as soon as next year. Right now, we have 1.412 billion people compared to China’s 1.426 billion. By 2050, we’ll hit 1.668 billion—way ahead of China’s projected population of 1.317 billion. What’s notable: Even though the global growth rate has fallen under 1%, the world’s population will grow to around 8.5 billion by 2030 and 9.7 billion by 2050. The increases will be concentrated in just eight countries: Democratic Republic of Congo, Egypt, Ethiopia, India, Nigeria, Pakistan, the Philippines and Tanzania. Indian Express has more on the UN’s population report. (Times of India)

Speaking of China: A growing bank scandal sparked rare public protests—leading to violent police response and arrests. The trigger: Four banks in Henan froze millions of deposits in April—leaving their customers unable to access their funds. The banks claimed they were “upgrading their internal systems.” But when people took to the streets to demand their money back, they were brutally beaten and taken away. The bigger worry: A shareholder in all four banks is under investigation for fraud—and there is talk of a criminal gang syphoning off their funds. New York Times has more details. You can see law enforcement—wearing white—assaulting the protesters below.

The Madhya Pradesh police have filed an FIR accusing the well-known activist of misusing funds of Rs 13 crore—collected to educate tribal students. Also: the NGO Narmada Navnirman Abhiyan trust is using these funds to finance “anti-national activities.” OTOH, Patkar has said the person who filed the complaint has ties to both the BJP and RSS—and that the police have not notified her about the FIR. (The Wire)

Forget Russian con artists like Anna Sorokin. No one can pull off a scam quite like jugaadi Indians—and they managed to fool the Russkis. Villagers in Gujarat staged an elaborate fake IPL to steal money from Russian bookies. Here’s how it worked:

Some pretended to be umpires, and there was even someone mimicking the popular commentator Harsha Bhogle. The matches were filmed on 5 HD cameras and streamed live on YouTube, complete with fake sound effects of ambient audience cheers.”

They solicited bets through a Telegram channel—and had received upwards of Rs 3 lakhs ($3,778) through hawala couriers. But they were soon caught by the police—who ruined all the fun by launching an investigation. Times of India has all the details.

First, the cabin crew failed to show up to work—to audition for an Air India job instead. Now, aircraft technicians have called in sick since Friday—demanding the airline restore their salaries to pre-pandemic levels. They’re particularly upset since IndiGo has already revised pay packages for pilots and cabin crew:

“Technicians work under the supervision of aircraft engineers and carry out routine maintenance. Across the sector, technician salaries are low and Covid-19 pandemic worsened the problem as some airlines resorted to pay cuts.”

Sickle cell disease: A new study found that the plant Alchornea cordifolia aka the Christmas Bush helps prevent and reverse the symptoms of this life-threatening disease. SCD is a genetic disease that blocks blood flow to the joints, chest, and abdomen—leading to severe pain, swelling of hands and feet, delayed growth and problems with eyesight. What’s notable: The plant has long been used as a traditional remedy in Africa—where the leaves are crushed, blended or brewed into a tea.

Why this matters: “Existing treatments are expensive, and some involve blood transfusions. It can only be cured with a stem cell or bone marrow transplant, but this is rarely done because of the risks involved. FYI: There are 1.4 million patients in India—the second-highest number after Nigeria. (Telegraph UK paywall or Aberystwyth University)

Salt: A large UK study links adding salt at the table to premature death—defined as dying under the age of 75. Those who always season their food have a 28% increased risk of premature death—at 50, this translates to 2.3 years less for males and 1.5 less for females. What’s notable: The risk may be lower for people who eat a lot of fruits and veggies—because potassium offers protective benefits. But no number of apples a day will help if you’re pouring a ton of salt on your plate. (ScienceDaily)

Starbucks goes all in on kaapi

The company has embraced masala chai and filter coffee in a bid to go more local—and become more affordable. The revamp includes a number of Indianised sandwiches and snacks. To be fair: Starbucks already offers a turmeric latte and paneer-kulcha. The bigger aim is to keep up with the new competition—which includes the Canadian coffee chain Tim Hortons and Reliance-led British brand Pret A Manger—which are due to launch this year. (Economic Times)

One: Protesters who have occupied the Presidential Palace in Sri Lanka are doing their bit to keep it clean—and take out the trash. One of them said: “We feel responsible to clean because it’s a public area…we believe our generation should change the system. We’ve given a message to President Rajapaksa & should be calm now.” (Financial Express) 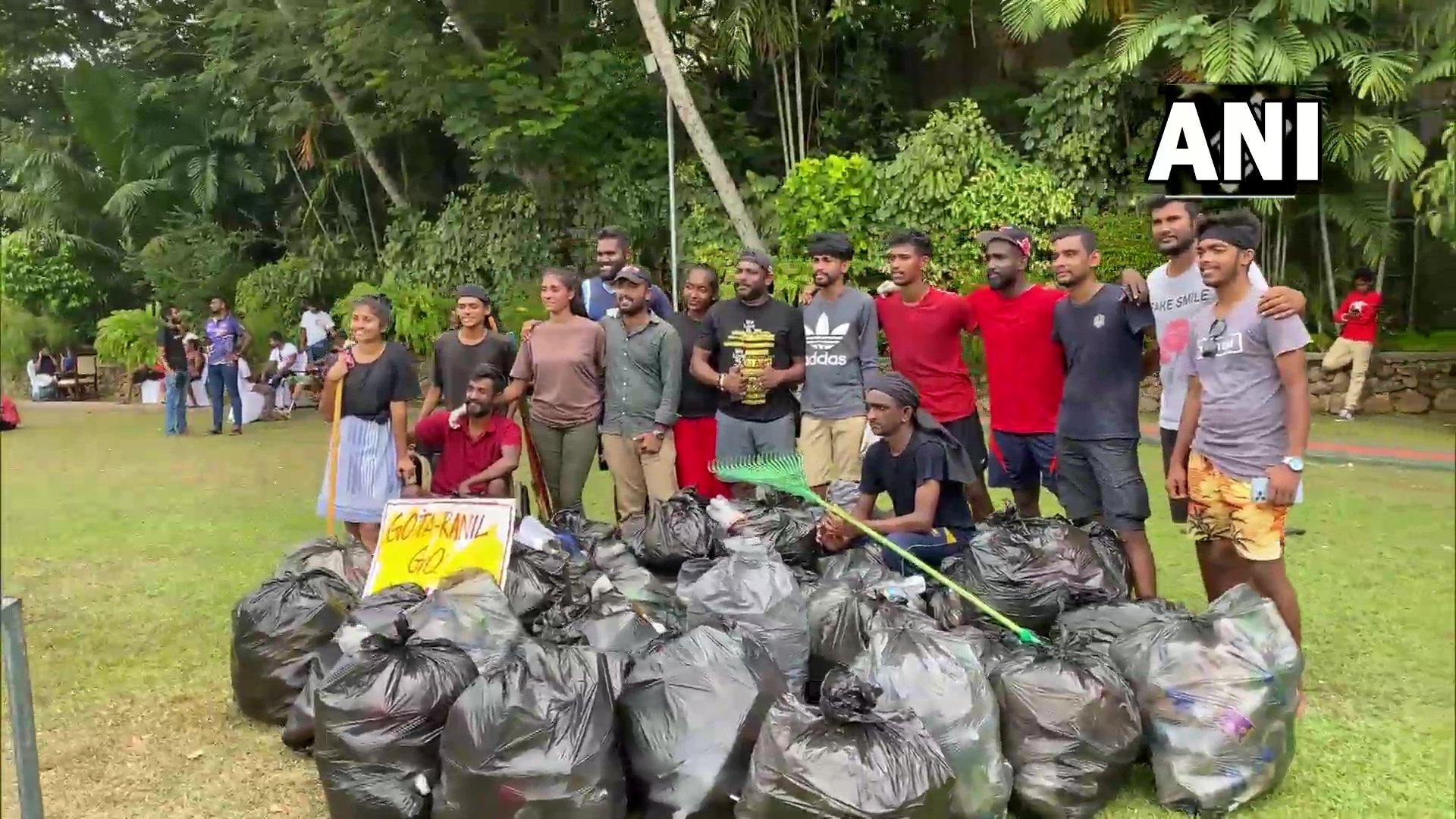 Two: English actor Florence Pugh clapped back at everyone who trolled her for a sheer gown she wore to a Valentino show in Rome. The see-through gown elicited body-shaming over Pugh’s breasts, to which she said:

“What's been interesting to watch and witness is just how easy it is for men to totally destroy a woman's body, publicly, proudly, for everyone to see…It isn't the first time and certainly won't be the last time a woman will hear what's wrong with her body by a crowd of strangers, what's worrying is just how vulgar some of you men can be.”

See the gown below. (People) 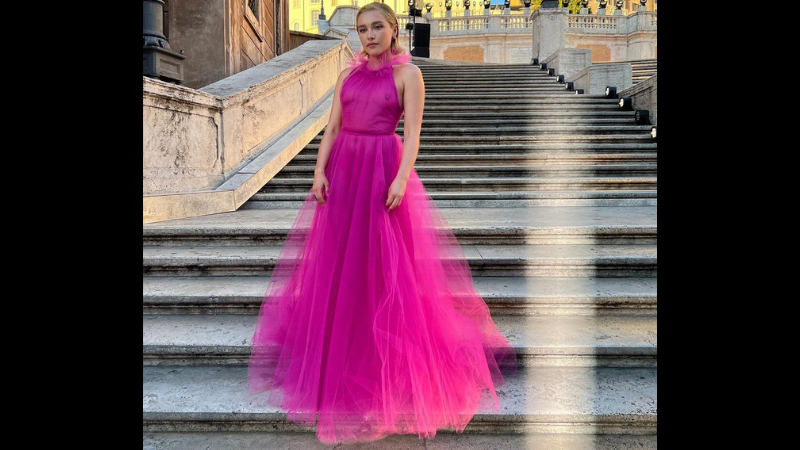 Three: A District Magistrate in Bihar offered a perfect demonstration of the petty tyranny of Indian bureaucrats. He ripped apart the headmaster of a girls school for wearing a kurta pajama—and even demanded that his salary be cut. (India Today)