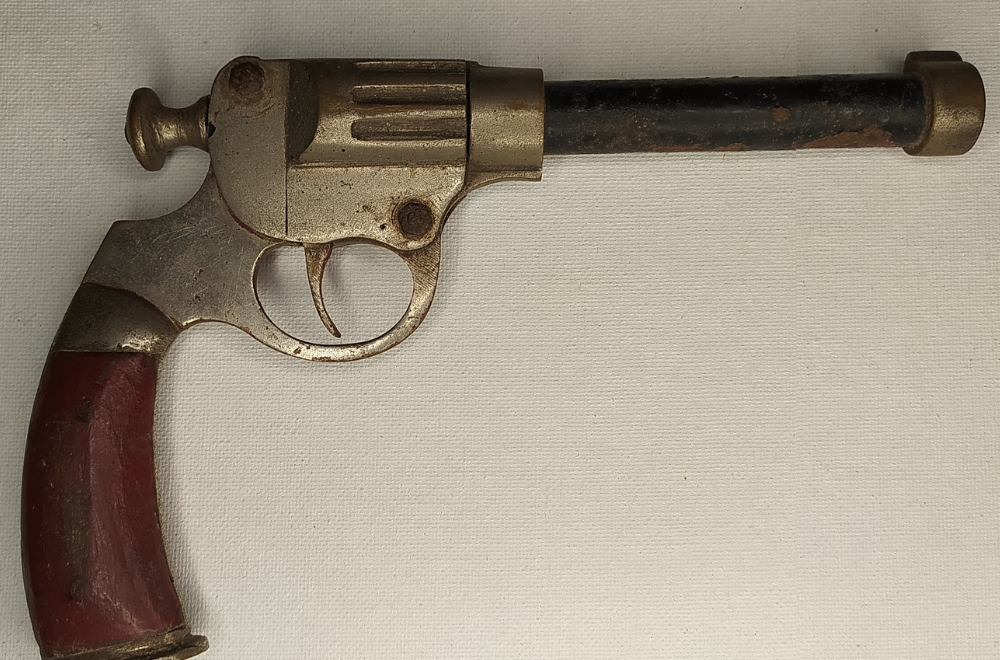 In 2017, the well-known journalist was shot dead outside her home in Bangalore. The police investigation dragged on slowly—resulting in the arrest of 17 people belonging to a shadowy Hindutva organisation. The case finally went on trial in May—and its outcome will be critical given the current political environment. In this first part, we look at the killing and the investigation. Part 2 will look at the trial.

Remind me… who was Gauri Lankesh?

Origin story: Lankesh grew up in a well-known family of intellectuals. Her father, Palya, was a legendary figure in Karnataka—a literature professor, poet, playwright, filmmaker and publisher of the weekly Kannada tabloid Lankesh Patrike. Lankesh followed in his footsteps as a journalist—with early gigs at Times of India—in Delhi, far away from her father’s giant shadow. But in 2000, after his death, Lankesh and her brother Indrajit took charge of the tabloid. You can see Lankesh with her sister Kavitha below. 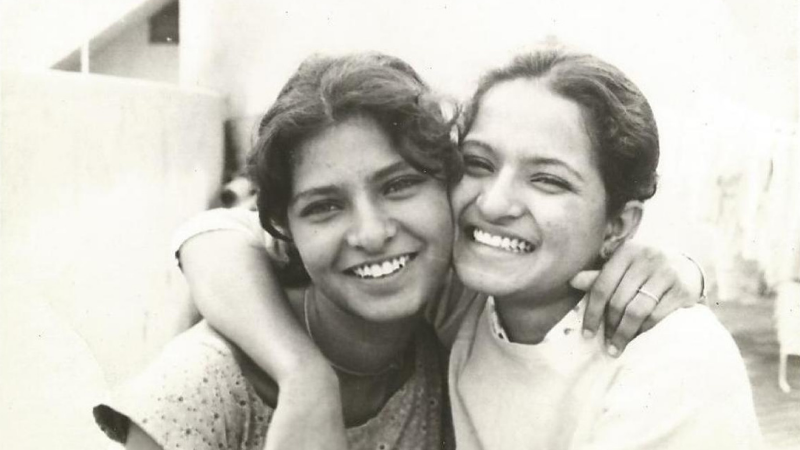 The big break: Lankesh truly came into her own after a fallout with her brother. Indrajit took exception to an article she wrote on an ‘encounter killing’ of a Naxalite—who was also a former classmate. Indrajit refused to publish the piece—claiming it was too sympathetic to extremists—and even threatened her with a revolver. Lankesh left to start her own paper called Gauri Lankesh Patrike.

A fearless career: Lankesh’s single-minded focus on Hindu nationalism often earned her the label of being a “polemicist” and “sometimes reckless.” Her tabloid was described as “gleefully sensational and indifferent to decorum.”

There were many who disagreed with her even on the Left—but she won most over with her “capacious heart” and “boundless affection”. Her outspoken views—and concern for minority rights—earned her both admiration and threats. She would tell her sister proudly: “I am on the hit list.” Lankesh’s last Facebook post before her death read: “The RSS is the terrorist organisation.”

Ok, tell me about the killing…

The murder: On September 5, 2017, the 55-year-old returned home from work around 8 pm. A man wearing a helmet approached her in the driveway—and shot at her four times. Two bullets were recovered from her chest—and one in the back. A fourth bullet likely missed its target. The weapon: a 7.65 mm bore country-made pistol. The initial investigation pinpointed four men on two motorcycles—of which one did the actual killing. And at least one other was also carrying a gun in case the initial attempt failed. In other words, it was a planned assassination.

The mourning: The importance of Lankesh’s work and the love she inspired was evident in the spontaneous outpouring of grief and anger:

“About 20,000 people attended a Bangalore rally in her honour a week later. Her friends marveled not only at the number of supporters but at their variety: writers, students, activists, members of the marginalized Dalit and Adivasi communities, transgender women, rickshaw drivers, landless farmers, Muslims, Christians. Large ‘I Am Gauri’ demonstrations arose nationwide in outrage at the increasing attacks, rhetorical and physical, on Indian journalists.”

PM Modi, however, did not say a word—neither did the BJP.

Point to note: The staff of the Gauri Lankesh Partrike published a last tribute edition after her death. And they have since tried to preserve her legacy. A year after her death, they launched a new tabloid called ‘Nyaya Patha’ (Way of Justice)—and now run two online sites: Gauri Lankesh News in English and Naanu Gauri in Kannada.

How did they find the killers?

Initial speculation in the right-leaning media like Republic TV focused on a Naxalite angle—which proved to be a dud. A Special Investigation Team (SIT) was formed the day after her murder—but failed to find a strong lead for months—when they suddenly got a lucky break.

The Hindutva connection: The police focused their search on a list of over 200 people—mostly from hardline Hindu right-wing groups—operating in Karnataka, Maharashtra and Goa. The reason: Lankesh’s murder was similar to the killings of three other left-leaning intellectuals. Narendra Dabholkar was shot in Pune in 2013—and Govind Pansare in Kolhapur and MM Kalburgi in Dharwad—both in 2015.

The first break: The police analysed over 1.5 crore calls—but couldn’t make any headway because none of the killers had used a mobile phone. And then they got lucky. They intercepted a call by a Naveen Kumar—who told a friend that he’d gone underground after Lankesh’s murder. More shockingly, subsequent conversations uncovered a plot to kill Mysuru-based rationalist KS Bhagavan. The police arrested Kumar to prevent the assassination—but could not get his handler, Praveen.

The plot unravels: But soon after, Praveen was arrested separately in connection with an illegal arms case. His diary included phone numbers and code names for co-conspirators and sketches of routes to Lankesh’s house. This led to three more arrests—and another diary that contained a hit list of 36 names including Lankesh, but also others such as actor Girish Karnad.

The assassin: The investigation finally led to the arrest of Parashuram Waghmore—who actually pulled the trigger. Interestingly, he’d previously been arrested for raising a Pakistani flag—to create communal unrest in Sindagi, a town near the Karnataka-Maharashtra border.

Who are these men?

A ‘terror cell’: All the men arrested were associated with extremist rightwing groups—such as Hindu Yuva Sene, Sri Ram Sene—and they took part in events held by the Sanatan Sanstha and the Hindu Janajagruti Samiti. But the police insist that these groups are not implicated in the killing:

“The accused claim to be members of an unnamed organisation formed to eliminate those harming Hindu dharma. It operates like a terror cell, where teams are given information on a need-to-know basis.”

In other words, they were operating independently—“poaching people with extremist views with a bent towards violence from various fringe groups.”

“The members of this organisation targeted persons who they identified to be inimical to their belief and ideology. The members strictly followed the guidelines and principles mentioned in Kshatra Dharma Sadhana, a book published by Sanatan Sanstha.”

Image to note: Soon after the arrest, an image of Waghmore—who shot Lankesh—with the chief of Sri Ram Sene went viral on social media: 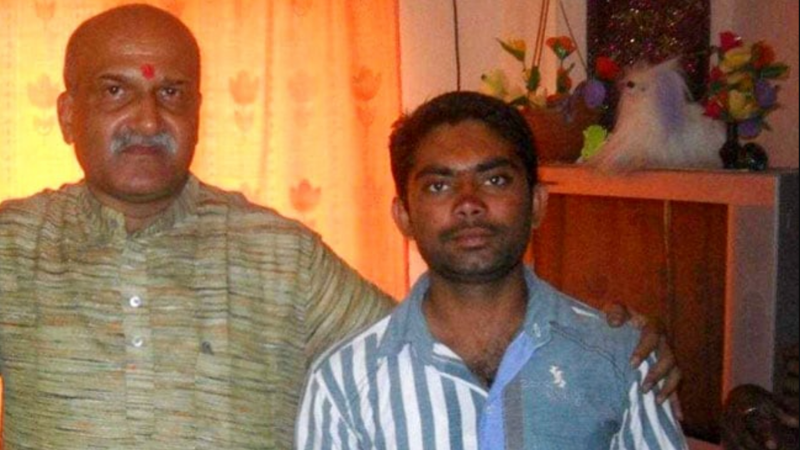 The bottomline: While the police have consistently downplayed the links to Hindu extremist groups, in the courtroom, the defence lawyers are putting Gauri Lankesh’s politics on trial. We look at what’s happening in court in the next instalment.

Columbia Journalism Review has the best, in-depth piece on the killing. New York Times has an excellent profile of Lankesh. The Hindu has the most details on the investigation. Indian Express has a detailed profile of all the accused. The Hindu also looks at the parallels between Lankesh’s murder and those of three other left-leaning intellectuals.