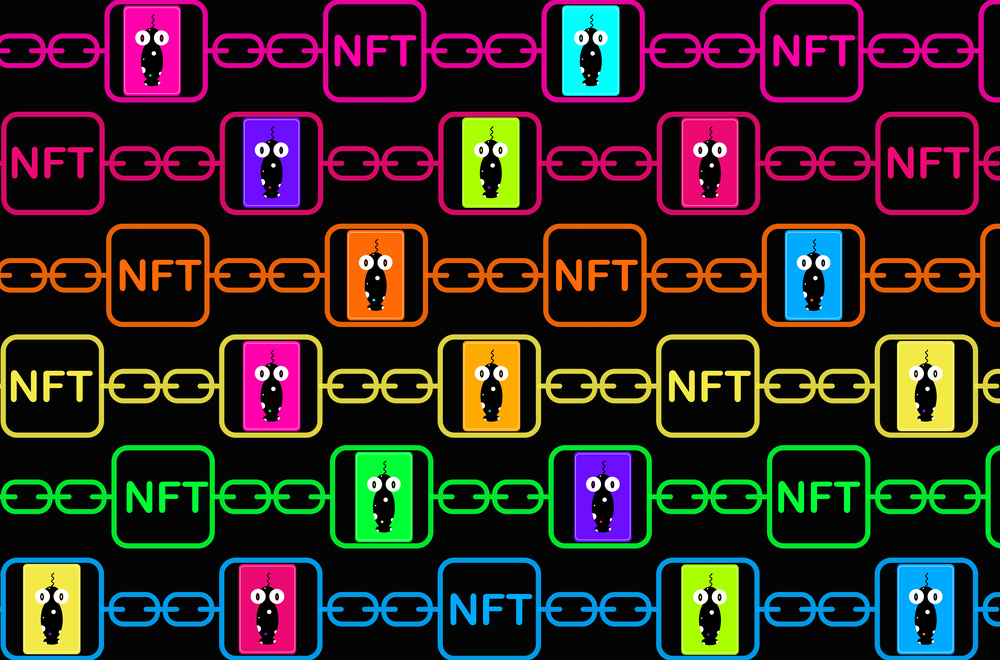 What’s the big fuss over NFTs?

The TLDR: This is another one of our made-to-order big stories for our subscribers who want us to explain this latest mania over NFT aka Non Fungible Tokens. These are digital objects—ranging from music albums to artwork to, er, a single tweet. This is a cryptocurrency thing which… well, we might as well get started.

Think of cryptocurrency as a casino chip. You pay rupees or dollars in exchange for a certain amount of digital tokens—based on its current exchange rate. There is no money you can withdraw or hold in your hand. This moolah only exists as numbers on your computer. There 6,700 different cryptocurrencies and their total value as of last month was more than $1.6 trillion. Bitcoin is the oldest and most valuable.

Unlike a casino chip: its value gyrates wildly based on how many people are eagerly buying that currency. For example, Bitcoin traded at $20,000 in December 2017, dropped to as low as about $3,200 a year later, and currently trades at $53,623. Also, it can be riskier than gambling, as one Silicon Valley investor explains:

“In roulette, if you put $1 on every number, you’ll spend $38 and be guaranteed to get exactly $36 in return. You could buy $1 of every cryptocurrency and they might all end up worthless.”

Like a stock then? Yes, except there is no government authority to oversee the trades—as it might do a stock exchange—or manage the value of any given currency. So there is no safety net if the bottom falls out, or if someone finds a way to rig or override the system. Also this: Unlike company shares, a bitcoin doesn’t accrue value if a company grows or becomes more successful. The only way your investment will grow is if many others buy that currency.

Why do this then? No bank or government collects fees on any transaction. And you can also use your crypto to buy anything you want—without your transactions being seen or recorded by such institutions. You can see how this might be attractive to privacy fiends and drug dealers alike. Most often, lots of people buy cryptocurrencies as a form of investment—hoping its value will soar and make them a fortune. The very volatility is its great appeal.

Last but not least, thanks to blockchain technology, every transaction is very safe.

Blockchain is the term used to describe a collective Excel sheet or khatabook—which stores every transaction ever made. This is called a ‘ledger’. Except it isn’t stored in a centralised database but distributed across hundreds of thousands of computers across the world. Each transaction is recorded in something called a ‘block’—which is then linked in a “chain” to previous cryptocurrency transactions.

As one founder of a cryptocurrency describes it: “Imagine a book where you write down everything you spend money on each day. Each page is similar to a block, and the entire book, a group of pages, is a blockchain.”

Why is this extra secure? Because it is decentralised and distributed across computers owned by volunteers. No one person can fiddle with the books. As Popular Mechanics explains:

“[T]hose computers run software that verifies transactions, checking to make sure that both parties agreed to the change, and that the buyer has enough currency to honor it… If enough of those computers conclude that yes, this is a valid exchange, that verification joins the rest of the world’s recent transactions as a ‘block.’ To prevent people from generating counterfeit currency, the math required to verify a transaction takes so much computing power that no one user or group could do it.”

Plus this: Each person has their own copy of the ledger—which is updated every time there is a transaction. This keeps all records “identical and accurate.”

Point to note: This current method of verification is called mining—and the volunteers spread across the world are called miners. They use a complex system called ‘Proof of Work’ (explained here so we don’t have to) to verify each transaction, and earn crypto as their reward. The big problem: As mining has become ever more profitable, this method has become massively energy-intensive:

“Over the past decade, bitcoin miners have set up thousands of warehouses of computer hardware dedicated to performing trial-and-error computations in a race against each other to win the block reward. The result is a massively inefficient coal-powered monster that consumes the same amount of energy [a year] as a country (Argentina) with 45 million people, all in the name of ‘number go up.’”

And what does this have to do with NFTs?

Haan, so this is where it gets a little weird.

Defining NFTs: Where one token of cryptocurrency is exactly like another, Non Fungible Tokens are ‘non fungible’—as in entirely unique. Think of them as collectible objects that exist only in a digital form. They are currently only being traded on the Ethereum platform—which is the second most popular cryptocurrency after Bitcoin.

Umm, say more? Think of it as a unique object—could be a bit of digital art or a digitally recorded song—that you can buy and own. And it exists solely online. Now, everyone can see what you bought, but you remain its unique and sole owner—a fact recorded in that object’s token. As Mashable puts it: “[I]t's like a unique collectible card in a forever-open store window that anyone can admire, but only one person… can own at any given time.”

Point to note: Others, however, can make copies of your unique NFT. As Verge explains:

“But NFTs are designed to give you something that can’t be copied: ownership of the work… To put it in terms of physical art collecting: anyone can buy a Monet print. But only one person can own the original.”

In this case, the original is in the form of a digital token stored in your cryptocurrency wallet—and your print of your digital Monet painting will look exactly like everyone else’s print. Sooo, there’s that 🤷🏽‍♀️

I still don’t get the point of this…

Maybe some examples will help?

One: Elon Musk’s partner Grimes just sold digital artworks worth $6 million. The highest selling piece among the ten on the block is a video titled ‘Death of the Old’, which you can watch as part of this compilation on YouTube lol!

Two: Mike Winkelmann aka Beeple made $3.5 million in a single weekend from selling his art. Christies’ is planning to put his digital collage on sale—the first-ever such auction for the prestigious auction house. And it will accept payment in crypto. This one titled ‘Crossroads’ sold for $6.6 million in late February: 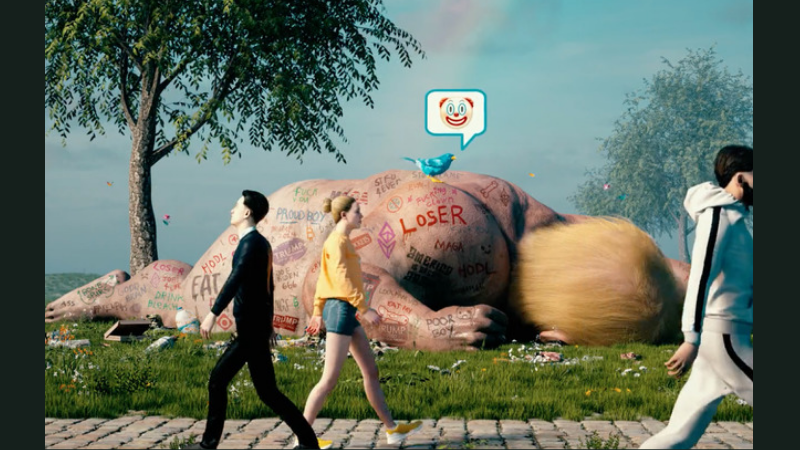 Three: Twitter CEO Jack Dorsey put up an autographed version of his first ever tweet on sale. The highest bid right now is $2.5 million. What the buyer gets other than the lame screenshot below: “an autographed digital certificate, signed using cryptography, that will include metadata of the original tweet.” 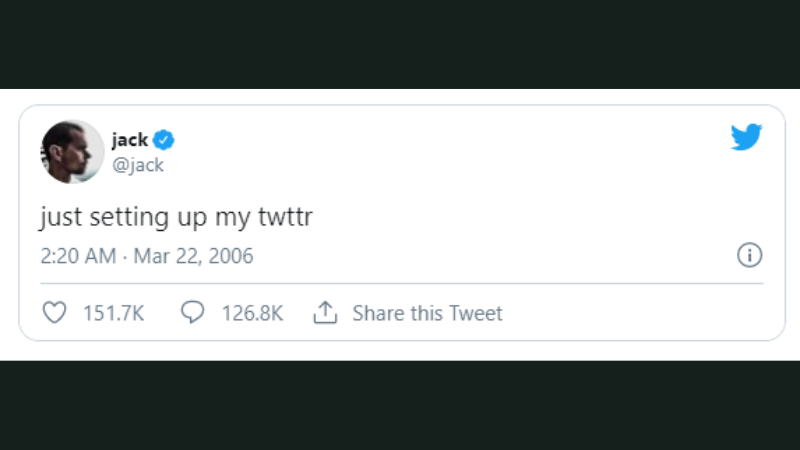 Point to note: The market for NFTs has skyrocketed in the last 12 months—tripling in 2020—and is currently valued over $250 million.

Again, why would you buy this stuff?

It’s easy to see why artists would want to sell NFTs. Each time the object they create changes hands, they earn a cut. As for the buyers, well, it’s mostly the same reason why people gamble:

“As with cryptocurrencies, many investors simply want to take on NFTs for speculative market value. But, of course, the point is they could never spend them if they wanted to. All NFTs will need to be sold individually at auction like traditional artworks, but the original transactions will stay on the record forever.”

The bottomline: We’d say something rude about a fool and his money, but we’re going to be zen instead and remind ourselves: To each his own. Also: maybe we should hawk the very first edition of splainer as a NFT lol!

Popular Mechanics, Forbes offer the best explanations of cryptocurrency. For a more fun version: check out John Oliver. Andrew Steinwold has a good history of NFTs. Amy Castor has an excellent read on the eco-footprint of bitcoin mining—which she also explains at length. The Verge and Mashable have great guides to NFTs. Wired looks at the increasing concern among NFT artists about that footprint. If you want to jump into the world of cryptocurrency, NerdWallet is a good starting point.