For 20 Days, Stan Swamy, 83, Has Been Asking For A Straw And Sipper

That’s an NDTV headline and our quote for today. The story is no less telling. Stan Swamy is a highly respected 83-year-old tribal activist with Parkinson’s disease. Since his hands shake, he needs a straw and a sipper to drink. But these were confiscated when he was arrested two months ago, and since held without bail. Earlier this month, he was forced to go to court to ask that these be returned. The court gave the National Intelligence Agency 20 days (!) to respond. Their response: We don’t have it, ask the jail. The court has therefore rejected Swamy’s request. His lawyers have been forced to file a fresh motion to secure the return—of a straw and a sipper. You can send a straw and sipper to Stan Swamy here. 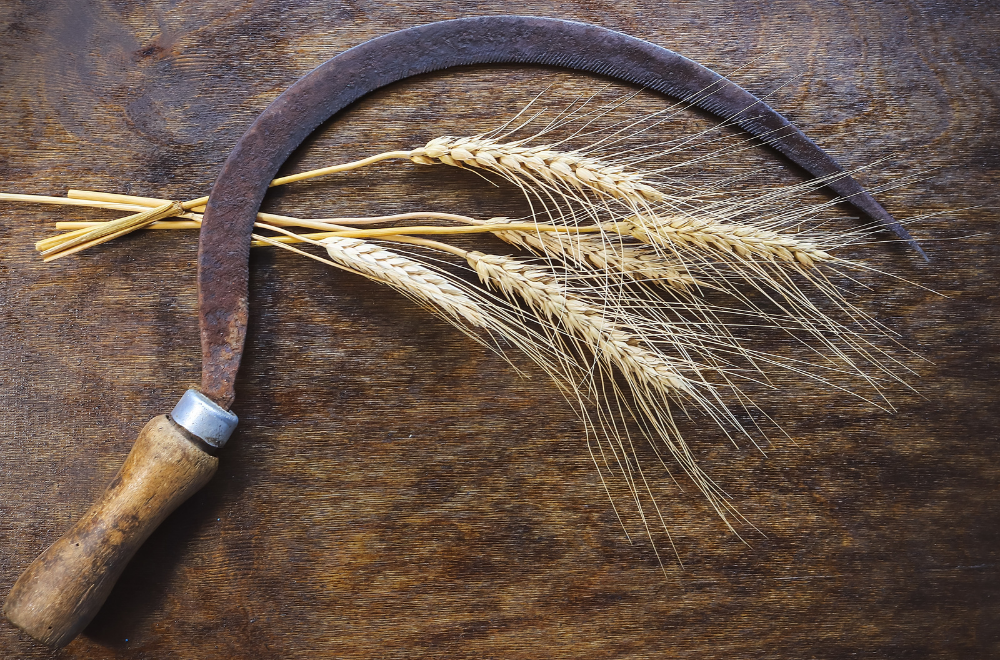 The TLDR: Tens of thousands of farmers are marching toward Delhi from Haryana and Punjab to stage a gargantuan protest against the new farming laws. The Union government is using every trick in its book to stop them. We explain why the farmers are angry, and the current state of this faceoff.

Who are these farmers?

The ‘Delhi Chalo’ march was launched by the Samyukt Kisan Morcha (SKM)—an alliance of 31 farmer and trade unions. The aim: to protest the new farming laws passed by the government in September.  Most of them are marching from Punjab and Haryana. The plan: To enter Delhi and stage a protest at Jantar Mantar or the Ramlila Maidan.

What the government is worried about: The farmers plan to camp out in Delhi for a very long time. And they have good cause to worry. One farmer on a modified tractor told NDTV:

"We have enough ration for two and a half to three months… There is a 5,000 litre tank, gas stove, inverter, every facility you can think of. We have mattresses, quilts, enough vegetables."

Why are they angry?

They are convinced that the three new laws will destroy their livelihoods. Here’s the simplest explanation of these laws:

Er, none of this sounds bad…

There is nothing wrong with laws on paper—and the government insists that it will benefit farmers who will get a better price for their harvest by removing middlemen. But to understand why farmers are very angry, you have to understand how it’s been working until now. Let’s walk through it quickly.

The farm: Upto 86% of all farmers have small or marginal plots of land. Their harvests are modest and they make very little money—estimated at Rs 6,426 per month in 2014. And their income is precarious—subject to bad weather, cost of seeds, fertilisers etc.

The mandi: They usually sell their harvest at these government-notified mandis—typically to middlemen who then sell the grains and veggies to wholesalers or retailers etc. Note: farmers even today are free to sell outside these mandis.

The price: This lies at the core of the confrontation. For 23 crops, there is something called a Minimum Support Price. If a farmer fails to sell his harvest to the middleman, then the government buys it from him at this price. Think of it as a safety net that ensures the farmer will at least recover his costs.

So the government is getting rid of MSP?

No. The government in fact insists that it will not touch MSP. And theoretically, eliminating middlemen and allowing farmers to directly sell to buyers will get them a better price. But here’s the nightmare scenario for these farmers:

Point to note: The new system can work if the farmers can collectivise to increase their bargaining power. And the government has plans to support such efforts—but many experts argue that they will not be adequate. In any case, these farmers do not have the luxury of waiting for three-year plans to deliver. Since their incomes are so precarious, they are worried about losing their livelihood right now.

Also worried: State governments that make a hefty amount in mandi fees. Example: The Punjab government charges a 6% mandi tax plus a 2.5% fee from the central government—which adds up to an annual revenue of about Rs 35 billion. And naturally, the middlemen—who profit at the expense of farmers—are not happy at all (See: the case of pricey onions)

So what do they want?

Their core MSP demand: it should be made universal, within mandis and outside. All sales to buyers—government or private—cannot fall below this minimum rate. But right now, they insist that all the new laws should be rolled back—so they can go back to business as usual.

Ok, now tell me about the protests

The main confrontation unfolded on the Punjab-Haryana border—as the Haryana government moved to block the farmers from passing through the state to enter Delhi. But despite the use of tear gas and water cannons, more than 10,000 broke through the barricades at eight border points—and are now on the march again. They have also been joined by farmers within Haryana.

Here are five dramatic photos of the confrontation. Or watch this clip of water cannons being used:

Or the moment when the farmers broke through the barricades:

The bottomline: The government has invited the farmers for talks. But the preparations to keep the farmers out of Delhi resemble a military siege. See: the barricading of the border with barbed wire here. Or this insane clip of a national highway being dug up—like a moat against invaders.

There’s been so much ink spilled on this subject, we decided to keep this list simple. Indian Express has the best on-ground reporting. The Telegraph has the best overview of the protests. There are multiple explainers on the farm laws. But we found The Hindu to be most useful. Also see: NewsLaundry’s funny video version. Scroll explains why we need to make a greater effort to collectivise farmers. Hindu Business Line has an eye opening report on how middlemen profited from the last great onion price hike. 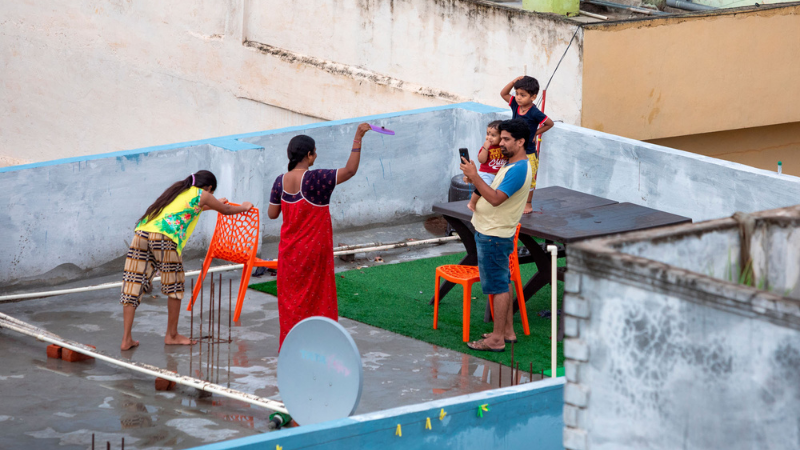 “I see rooftops as being streets in the sky,” says Madhu Gopal Rao—whose remarkable photographs capture the connection and solace they offer in the midst of an isolating pandemic. You can browse the entire collection over at his website, or read about it on Firstpost.

When AstraZeneca released the vaccine’s results, they were a bit odd. The vaccine was only 62% effective when participants received two full doses—but 90% when the first jab was a half dose, followed by a full dose. All of which the company clubbed together, and declared the vaccine to have 70% efficacy.

The mistake: The medical community is crying foul for several reasons. AstraZeneca admits that the half dose was administered to 3,000 participants by mistake. The mistake: A “difference in the manufacturing process”—which doesn’t inspire confidence in either vaccine or the trials themselves. Also, this error may disqualify the data. India’s leading virologist Gagandeep Kang says: “We have to see how much of this data (from the low-dose group) is potentially usable for regulatory submissions in the strictest sense, because, my understanding is you cannot use data that is not specified in the protocol.”

The response: Serum of Institute of India—which will manufacture the vaccine for India said: “Even though the lowest efficacy results are at 60-70%, it is a viable vaccine against the virus. That said, varied age groups with different dosage forms will result in slight variations and efficacy. We must be patient and not panic.” AstraZeneca announced plans to conduct a fresh global trial to test the lower dosage. Read New York Times via The Telegraph on the pushback against the vaccine. BBC News has more on the dosing error. Wired has a long piece raising multiple questions about its methodology and results. Read our explainer on the Oxford vaccine.

In other pandemic-related news:

One: New research confirms what many of us already know: Dalit women have received zero relief from India’s stricter rape laws. A study of 40 rape cases in North India showed that only 10% led to conviction. In 60% of the cases, the survivor withdrew her case and accepted a “compromise” settlement imposed by Khap panchayats. Also this: “In almost 90% of cases, at least one of the accused was from a dominant caste, with men often acting in groups to carry out gang-rape and murder.” (Reuters)

Two: While all the attention is focused on Delhi and other northern states, a new study shows that air pollution levels are rising faster in the south and east. Also, a piece of data that rarely gets attention: pollution levels in rural India is now at par with the cities. (Indian Express)

Argentina is in three days of national mourning. Thousands of fans—most of them in tears—flooded the streets to mourn the demise of the football legend. His professional ‘home town’ Naples announced plans to rename its stadium after him. In the deluge of tributes, two things caught our eye: Gary Lineker demonstrating Maradona’s legendary skills on TV. And this wonderful cartoon that went viral: 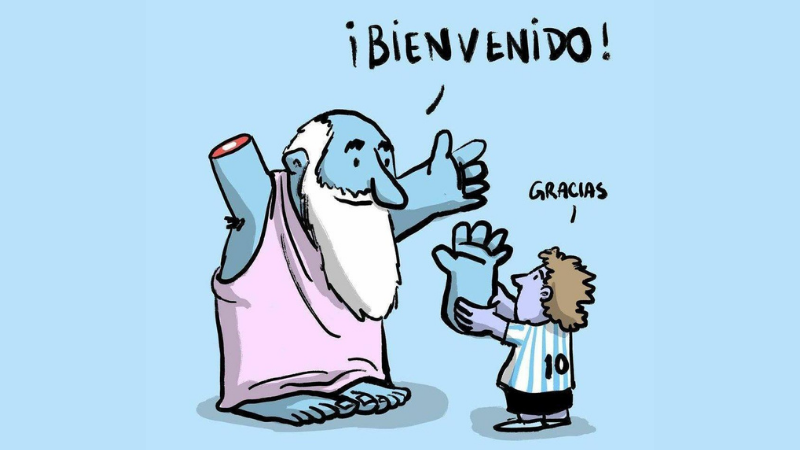 One: Thai authorities proudly unveiled a $1 billion bust of ketamine—a popular party drug. Sadly, tests now show that all they have is 11.5 tonnes of a harmless cleaning agent. The country’s justice minister is blaming it on a “technical error.” (BBC News)

Three: This is the world’s most expensive handbag, and it costs $7 million:

"Crafted from semi-shiny alligator skin, the handbag is adorned with 10 white gold butterflies, four of which are decorated with diamonds and three with sapphires and rare paraiba tourmalines, totalling over 130 carats. It also features a diamond pavé clasp."

Before you pooh-pooh such insane extravagance, know that its design was inspired by the ocean—and the brand will donate $950,912 of each of the three bags sold to causes dedicated to fighting plastic pollution in our seas. 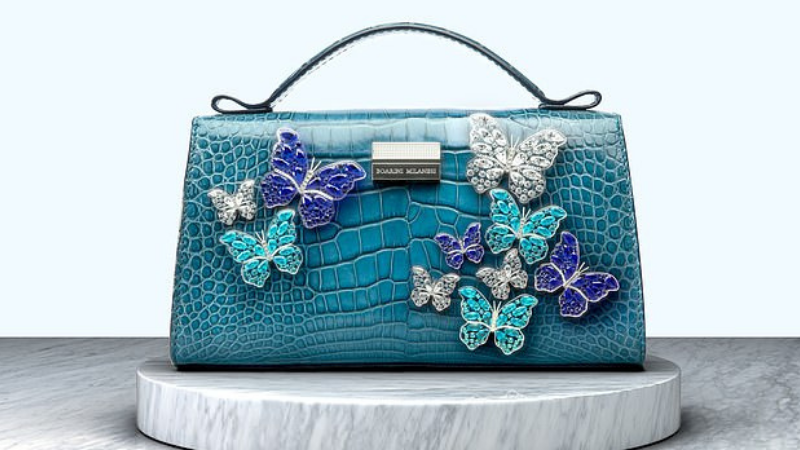 Four: ‘A Dog Pissing at the Edge of a Path’ has beaten ‘Introducing the Medieval Ass’ to win the prize for oddest book title of the year.

Each year, the animal rights ‘Foundation 30 Millions D’Amis’ (30 million friends) puts out a short film to raise awareness about 100,000-200,000 pets who are abandoned in France each year. In this one, the dog is never abandoned, and yet the point it makes is so powerful and moving, it made us teary-eyed. FYI: Karthik Srinivasan has pulled together a number of this foundation’s ads, and they are totally worth checking out—as is his analysis.

Two trend-spotting reads: Mint charts the peculiar spike in protein inflation—as in egg, fish, dal and meat—and the accompanying hidden rise of protein deficiency. Huffington Post UK looks at the growing mental health crisis among journalists—and why it affects all of us.

One: A gift you can send to a news journalist you know and love:)

Four: This one is for the many members of the splainer fam in the US: Happy Thanksgiving!

You are reading 1/5 free newsletters


If you are a subscriber, please Log in.
Have questions? Check out our FAQs page