The Indian government has proposed amendments to digital media rules which may give its in-house fact-checking agency—with a dubious fact-checking record—more legal power to decide what content stays on the internet, leading to concerns around freedom of online speech.

Wait, remind me: What are these digital media rules?

Reminders: The companies will have to send regular reminders to each one of us not to publish anything that is: (i) invasive of another's bodily privacy or harassing based on gender; (ii) patently false or misleading but appearing as a fact; or (iii) false, to cause injury or to profit. Failure to comply with these rules will result in the termination of your account.

Takedowns: Companies must immediately obey a court or government agency request to block an account or takedown a post within 36 hours. The grounds for such a request include protecting the interest of the sovereignty or security of the state, decency, morality—and preventing anyone from inciting a crime that threatens the above.

Read our earlier Big Stories (one, two) for all the deets.

In a draft amendment on January 17, the government proposed one more category of takedown:

[A]ny information that has been identified as ‘fake’ or ‘false’ by the Press Information Bureau (PIB), or any other agency of the Union Government, to which the news story relates.

For all news? Nope. Officials claim this power will only be exercised on information pertaining to the central government. They do not have the authority to fact-check any other content related to state governments, agencies or private entities.

Point to note: This provision does not apply directly to news websites, as they are not classified as intermediaries.

Can’t platforms say no if they disagree?

That’s tricky. Failure to comply with these rules essentially threatens their ability to claim “safe harbour.”

What this means: basically, platforms are treated like bookstore owners who cannot be responsible for the content within books on their shelves. And this ‘safe harbour’ protects social media companies worldwide—and is necessary to safeguard their free speech policies.

So yeah, the stakes are high.

Okay, tell me about the fact-checker.

The PIB is the “government’s nodal agency that disseminates information and updates on the government and its decision to the media.” It is a department of the Ministry of Information and Broadcasting.

It essentially acts as the main gateway to any communication from the central government—often even acting as the government’s PR agency. It does this through “press releases, press notes, feature articles, backgrounders, photographs, database” in English, Hindu and Urdu.

And now, The Fact-Checking Unit...The FCU

In November 2019, the organisation announced that it had set up a fact-checking unit called PIB Fact Check to debunk any false information pertaining to government ministries, departments and schemes.

The unit takes cognisance of fake news based on input from people and suo motu. Officials say its mandate “is to examine the veracity of only the contents related to the Central government ministries and organisations and will remain so even when it is empowered to get any fake content removed from the social media platforms.”

But, just so you know: we found one case where the PIB fact-checked an incident from Gujarat which had nothing to do with the central government.

How big is The PIB FCU?

As of January 2020—just months after conception—the unit only had three people and “a shoestring budget”. We could not find any recent new reports about its size.

The unit debunks fake news primarily on social media where it has handles on Instagram, Facebook, and Twitter—with a combined following of approximately 425,600 followers (with the Twitter handle having the highest number of followers at 286,500 followers). And their Telegram group has around 17,000 subscribers. As of now, they have fact-checked over a thousand reports.

Are they good at their job?

Well, well, full disclosure: I have been on the receiving end of The FCU’s fact-checking. They labelled my HuffPost India investigative report on Covid ventilators ‘fake news’.

I scanned their Twitter account and found broadly three categories of fact-checks. (Spoiler alert: they do some good stuff!)

One, identifying scams: They have called out

Two, pro-government fake policies: The Twitter-verse will tell you that the FCU mostly checks anti-government news. Not really.

For example, the following three claims—all false—show the government in a good light.

The FCU called out all these, among many more.

Three, denying reports critical of the government: This is where things get tricky, messy, and problematic.

Sometimes they are right: In August 2022, “Several social media users, including Trinamool Congress national spokesperson Saket Gokhale, claimed that all tenants would be charged 18% GST on house rent under the revised tax rates.”

According to The Quint fact-checking team, the claim is misleading: “As per reports, only individuals who have registered themselves as businesses under GST will be liable to the 18% tax, which they can claim deductions under Input Tax Credit while filing for GST returns, under the reverse charge mechanism (RCM).”

The PIB fact-checked this three days before The Quint. 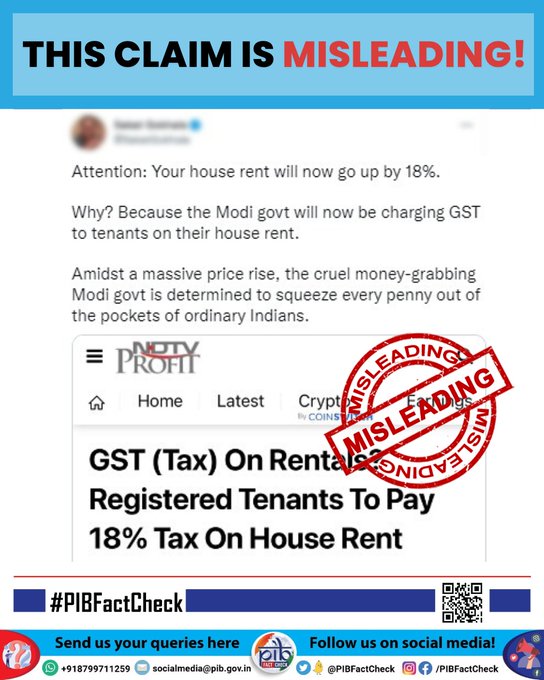 This was the case where they pointed out wrong information with specific facts.

But they don’t always do that: they have called out critical journalistic reports as ‘fake news’ without denying facts or sharing new information.

For example: In July 2020, the Indian Express had reported that a Special Commissioner of Delhi Police had issued an order that the arrests of Hindu youth from Northeast Delhi, which was hit by riots in February 2020, had led to a “degree of resentment among the Hindu community” and “due care and precaution” must be taken while making arrests.”

The FCU called this report ‘misleading’, relying on a Delhi Police statement that said the report did not follow the “spirit” of the order issued during the police’s investigation of the Northeast Delhi riots.

It’s worth noting that the news report quoted the police order—official facts. But the FCU called the story ‘misleading’ without denying any of the facts reported.

Other media houses that have been in the line of fire include The Caravan, The Wire, HuffPost India, Brut India, and Imphal Times.

Why are people worried?

Constitutional fears: The proposed amendments would impede the fundamental right to speech and expression—both for publishers obviously and also for consumers since they won’t receive information that is deemed “fake.”

Fake is vague: There is no clear definition of what “fake” or “false” news is. And there is no clarity about the process or parameters at play while deeming them as such. For example, Alt News, a fact-checking site, has published a methodology note.

Conflict of interest: Government can play the super censor.

As The Hindu notes in its editorial:

The disturbing absurdity of an interested party also playing the judge cannot be missed. It is a really nasty world of disinformation out there but one would have to be delusional to think that governments do not have an axe to grind. If the proposal is implemented, the government can play the super censor at will.

Also important to note: censorship is in the air…

The global picture: The response of governments across the world to fake news and misinformation can be categorised under four categories:

a) Monitoring and criminalising the spread of misinformation

b) Fact-checking and media literacy initiatives

Broadly, however, censorship laws around fake news have been the most dominant form of regulating misinformation. Several Southeast Asia nations including Malaysia, Singapore and Vietnam have passed laws against fake news. These laws grant broad powers to the government and don’t contain provisions on how transparent the decision-making process is. India seems to be getting there too.

The bottomline: What falls under ‘fake news’ is often not black and white. There are degrees to falsehood—and this arbitrariness is the source of power. The proposed rules are prone to misuse and are likely to accelerate the trend of increasing online censorship in India.

Internet Freedom Foundation has more legal details on the proposed rules. The Print has a good read on how the PIB fact-checking unit works. NewsLaundry shows why PIB’s fact-checking record is not great. Poynter has an excellent guide to anti-misinformation actions around the world. Also read: our older Big Stories on the IT rules and social media sites.