Oscar nominations are out!

First, the biggest news for India: ‘Writing With Fire’ became the first Indian production to be nominated for best documentary. It tells the story of Khabar Lahariya—a Dalit women-run newspaper in Bundelkhand. Watch the team celebrate when they hear the news here.

Now, onto the rest. ‘House of Gucci’ was snubbed on multiple fronts—earning only one nomination for makeup and hairstyling. Neither lead actor Lady Gaga nor director Ridley Scott are on the list. Jane Campion became the first woman director to be nominated twice. Also snubbed: ‘Dune’ director Denis Villeneuve. Who’s feeling good: ‘The Power of the Dog’ which received 12 nominations. Check out the full list here. Hollywood Reporter has more on the snubs. Quartz calls out four ways that the Oscars are playing it safe.

Speaking of film nominations: Razzie nominations are also out. The Golden Raspberry awards commemorate the worst performances and films each year. This year’s nominees include Jared Leto in the ‘House of Gucci’—for which he, to be fair, has also received the prestigious SAG nomination. But the clear leader of the pack is Netflix’s stage recording of ‘Diana the Musical’–-which has nine nominations, including the category of worst picture. More amusingly, organisers created a special category called the “worst performance by Bruce Willis in a 2021 movie”—which includes eight of his films. Variety has the full list.

The Freedom Convoy started in January as a loosely organized group of truck drivers protesting mandatory vaccination of truckers crossing the US-Canada border. It has turned into a rightwing, anti-Trudeau movement inside Canada—paralysing Ottawa. And the protests have now started to spread across the world. American truckers are planning their own convoy, from California to Washington. Republicans—including senators and Donald Trump—have jumped in to express support. Convoys are also planned in European countries. One plan is to target Brussels, which is home to the EU. Politico has more on the global angle, while New York Times looks at how the protests are playing out in Canada.

Some background: Scoopwhoop rose to prominence as India’s answer to BuzzFeed—specialising in listicles and light news content for young Indians. But it's struggled to make money, and its non-news verticals were recently bought by The Good Glamm Group. Its co-founders planned to spin off the news content—including its successful video channel ‘Unscripted’—into a separate company.

The #MeToo allegation: Just days before Good Glamm announced the deal in October, ScoopWhoop CEO and founder Sattvik Mishra, Unscripted anchor Samdish Bhatia and creative director Avalok Langer got together to discuss the new company. What happened next is an ugly he said/he said story. Bhatia insists that Mishra took his pants off and propositioned him—asking for a “chummi” in exchange for equity. Mishra insists Bhatia became drunk and highly aggressive—and had to be physically pushed out of his residence. NewsLaundry has both versions—including the sordid details.

The fallout: Bhatia has filed a sexual harassment complaint against Mishra, alleging “unwanted, unsolicited, and uncalled [for] sexual advances and sexually predatory behaviour of criminal and civil consequences.” Mishra has announced that he is stepping down as CEO because of “constant threats and mental harassment by an ex-colleague.” The Morning Context (paywall) has the biz angle—looking at whether ScoopWhoop suppressed Bhatia’s complaint to ensure the Good Glamm deal went through. FYI: ScoopWhoop faced a similar sexual harassment complaint from a female employee against another co-founder back in 2017—which was never resolved.

Speaking of the Indian media: The government put out new rules for ‘anti-national’ journalists. The Press Information Bureau offers accreditation to journalists—to give them access to government offices and events. According to the new rules, they will now lose their status if they act in a manner “which is prejudicial to the sovereignty and integrity of India, the security of the state, friendly relations with foreign states, public order, decency or morality or in relation to contempt of court, defamation or incitement of an offence.” On the upside: such accreditation is now available for reporters who work for digital news sites. (Indian Express)

One: Gautam Adani is now the richest person in Asia—having overtaken Mukesh Ambani. His current net worth: $88.5 billion—which is a shade higher than Mukesh-bhai’s $87.9 billion. Bloomberg Quint has more on how Adani managed this feat.

Two: Controversial venture capitalist Peter Thiel is abandoning Meta, and will be stepping down from its board. The reason: He is focusing on the upcoming midterm elections in the US—and doing his best to elect Trump-supporting candidates. Guess Facebook is just not doing enough evil these days… (New York Times)

Three: Thiel’s fellow VC and billionaire Tim Draper is now Palau’s first ever digital resident. The new program allows a person to become a resident without ever living in the nation—and has a waiting list of 300,000 applicants. This is part of a move toward more metaverse—and crypto-friendly policies to diversify the Micronesian island’s economy. (Marianas Variety)

A gender bias in cancer treatment in India

Data from Mumbai’s Tata Memorial Hospital in Mumbai—the largest cancer hospital in India—show a shocking disparity in pediatric cases: only one girl receives treatment for every two boys. This finding is based on data collected over a decade between 2011 and 2021. One example: A one-year old suffering from leukemia whose family pulled her out of treatment—and she eventually died. The reason: They already had another daughter. One oncology expert says: “No one says it directly. They beat around the bush then subtly pass on the message—a girl’s life holds lesser value.” FYI: Things are worse in the North, where a similar AIIMS study put the ratio of boys to girls at 5:1. (Indian Express)

Other data that speaks volumes: An analysis by The Hindu found that Delhi Chief Minister Arvind Kejriwal has mentioned PM Modi exactly zero times—in the 45 speeches that he’s made since kicking off his state election campaign. And that coyness is not new. In 2021, he only referenced the PM to wish him on his birthday—but not once when he was fuming over oxygen shortages during the second wave. The Hindu traces this growing silence to a very specific date:

“Even more interestingly, the AAP leader’s Twitter account reveals when he almost stopped using the name: May 23, 2019, the day when the results of the general election were announced and the BJP-led NDA came back to power again.”

Re-routing ships to save whales

Scientists and conservationists are calling for one of the world’s busiest shipping lanes to be rerouted to preserve a rare colony of blue whales—who live off the coast of Sri Lanka:

“The whales’ habitat overlaps with a major shipping artery that connects east Asia to the Suez Canal, leaving them vulnerable to ship strikes and noise pollution. On an average day the whales face off against a relentless barrage of about 200 ships, many of them container ships or oil tankers that stretch up to 300 metres in length.”

Just a small shift in the route—15 nautical miles south—could make a huge difference to the survival of this endangered species. FYI: companies elsewhere have already made similar adjustments—as off the coast of Greece to preserve sperm whales. (The Guardian)

Also endangered: Your favourite Japanese condiment, wasabi. Over the last decade, the volume of wasabi produced in Shizuoka—one of Japan’s largest wasabi growing areas—has declined by around 55%. The main culprits: Rising temperatures which have resulted in unpredictable rainfall, deluging floods and more intense typhoons—and therefore a rise in mold and rot. (New York Times)

Japanese scientists have found that lifting weights for just three seconds a day can build muscle mass. The exercises only involved the biceps—which showed an improvement of 11.5% in overall muscle strength after 60 seconds in total over four weeks. Bring out the champagne… and the dumbbells, of course. (Neuroscience News)

One: Charles Dickens was a very messy writer—and partial to using a shorthand code dating back to the 1700s. Experts were forced to hold a competition to decipher a mystery letter that has been kept for more than a century in a New York library—which was finally cracked by a 20-year-old student from Ohio. The Guardian has more on what the letter says. 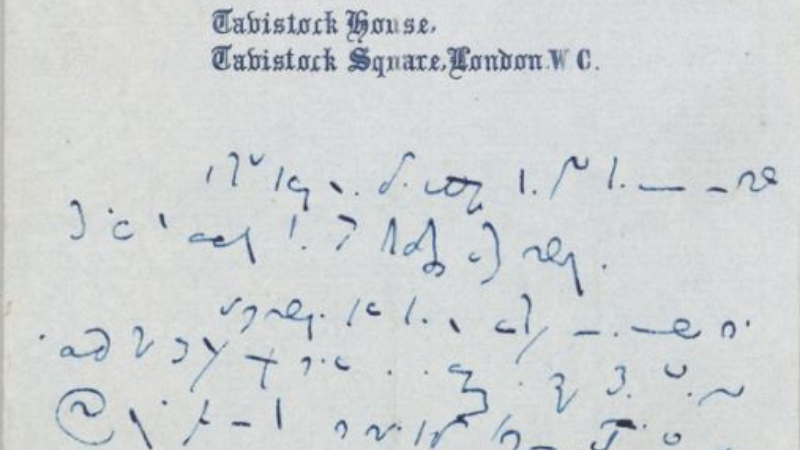 Two: The teaser for ‘The Kardashians’ has dropped. That’s all we’re going to say about this one.

Three: French President Emmanuel Macron met Vladimir Putin for talks to de-escalate the crisis over Ukraine—or rather the crisis triggered by Putin’s likely plan to invade Ukraine. No, the talks did not achieve anything, and this table may explain why. See the memes generated by the photo here (h/t founding member Ameya Nagarajan). (Associated Press) 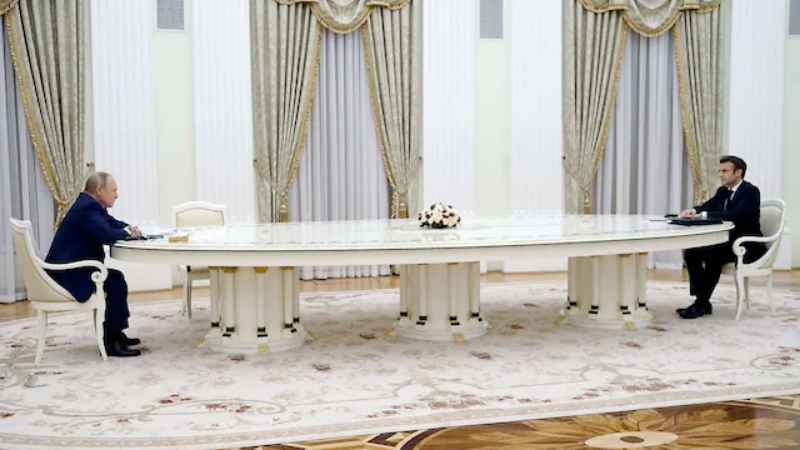