One: Guess what the swankiest trend in luxury splurges is these days? Nope, not a boring overpriced yacht, but your very own personal submarine. A Dutch company is selling U-boats for anywhere between $2.5 million to $3.5 million—or cheaper, two-seaters for $1 million.

A submarine ride is also now offered by a number of luxury cruises as a pay-to-play deep sea safari experience: “You don’t need tanks anymore to see all the stuff that’s down there. You have a cocktail and put on your music and go down a few thousand feet and have a blast.” The one little downside: These cool-looking vessels can feel a teeny bit claustrophobic. You can see what it looks like below. (New York Times)

Two: This is hilarious and entirely true. The US National Park Service had to issue a public health warning: “As we say with most things you come across in a national park, whether it be a banana slug, unfamiliar mushroom, or a large toad with glowing eyes in the dead of night, please refrain from licking.”

Specifically, it is wise to keep your tongue at a distance from the Sonoran desert toad—which “have prominent parotid glands that secrete a potent toxin.” But the toxin—when collected and dried—is also now a trendy hallucinogenic. Though it is more often smoked than, umm, licked. Also, who would want to lick that? (Gizmodo)

Three: Did you know that Singapore is what is called a “biophilic city”—in fact, the only one in Asia. The word ‘biophilic’ means a love of nature. These cities aim to rewild urban spaces, blending in nature into their landscapes. One way to do it is to retrofit old buildings—and construct new ones—with “green roofs, edible gardens, recreational rooftop gardens, and verdant green walls.”

A very encouraging fact to remember (if you despair at the state of our cities): At one time, Singapore had lost 90% of its forests, 67% of its native bird species, and 40% of its mammals. Below is a lovely photo of one of the new residential apartments. South China Morning Post has more on the latest projects. Euronews has more on Singapore’s road to becoming a biophilic city. 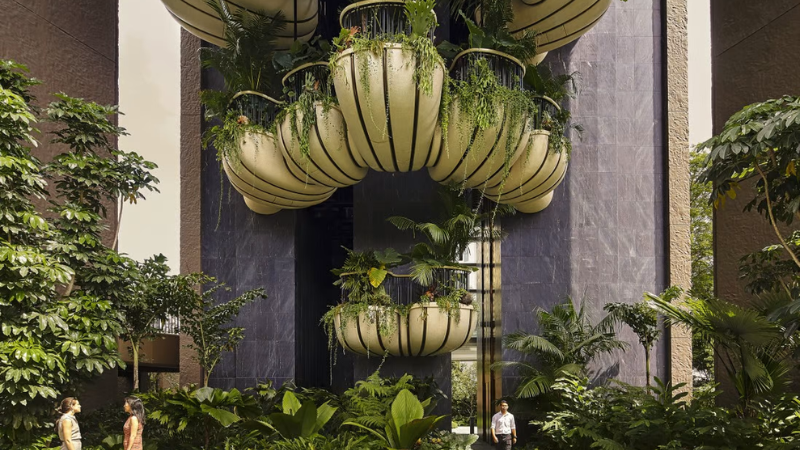