One: Back in 1961, 152 black cats showed up in Hollywood to audition for the starring role in a movie adaptation of an Edgar Allan Poe short story titled, well, ‘The Black Cat’. Sadly, none of them were chosen—and the role went to “a well-known professional cat”—as is typical of film industries everywhere. LIFE magazine has lots more quirky pictures of the big audition day. 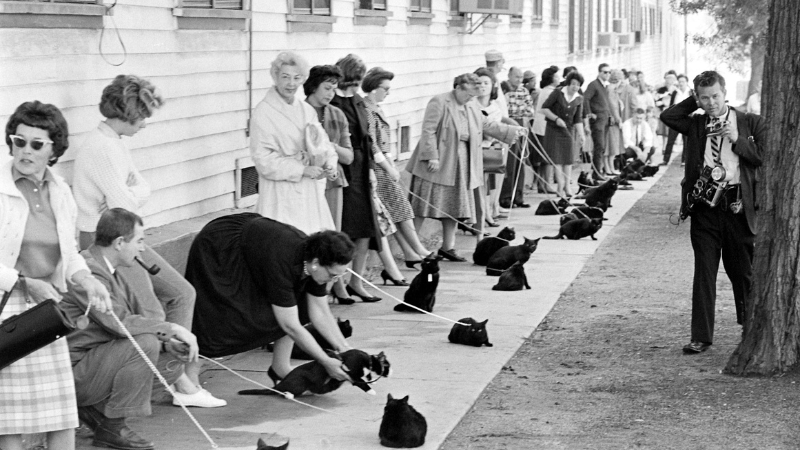 Two: ‘Fight Club’ famously captured 90s-era Wall Street machismo and dysfunction—and is now considered a classic. But did you know that its world premiere at the Venice Film Festival was greeted with boos? Here’s how the two lead actors tell the story:

“‘It gets to one of Helena’s scandalous lines—‘I haven’t been f***ed like that since grade school!’—and literally the guy running the festival got up and left,’ recalled [Brad] Pitt. ‘Edward and I were still the only ones laughing. You could hear two idiots up in the balcony cackling through the whole thing.’ Adds [Edward] Norton: ‘It got booed. It wasn’t playing well at all. Brad turns and looks at me says, ‘That’s the best movie I’m ever gonna be in.’ He was so happy’.”

There's a lot more on the making of the movie in this book excerpt over at The Ringer.

Three: Speaking of deceptive displays of machismo, researchers discovered a curious fact about howler monkeys—or rather, their testicles. Here’s what’s interesting: both the testes and voice boxes of males vary wildly in size. And each is important to get a gentleman’s job done—in this case, roar loudly “to attract mates, fend off competing males, and keep your sperm count high enough to finish the reproductive job.”

But roaring loudly and producing lots of sperm are each very strenuous activities. So the boys have to make a choice. As a result: the louder a male roars, the smaller his testicles are. There’s a lesson somewhere in here for humans—which we leave you to sort out. (Science)