Hey, notice anything different about us today? We are so excited that we’ve finally got to unveil our brand new design. Let me tell you a bit more about it.

First big thing to know: The app isn’t working as it needs a total reboot. Please don’t use it for now.

Ok, on to the gratitude: None of this would have been possible without the brilliant work of our partners Bull Design and BlackCurrant Labs—and, of course, the incredible dedication of the splainer team. A huge heartfelt thank you to Sara Varghese, Rachel John, Meghna Mathew, Prerna Barooah and Abhimanyu Sethia. And this entire project was conceived with the support of our biggest mentor and cheerleader, Chumbak founder Vivek Prabhakar. And I remained awed by the love and loyalty that splainer inspires in its community. Gracias, gracias, gracias!

The new design: is not just about slapping on a fresh paint job or moving furniture. It reflects splainer’s vision and soaring ambition—to radically transform the way you learn about the world you live in everyday. Today, when news has become a bad word—associated with noise, negativity and exhaustion—we want to make it effortless and enjoyable to be well-informed. And that’s why we’ve worked so hard to please your eye even as we feed your mind:)

Also this: Our world is far vaster, complex, intriguing, even delightful than just a line-up of headlines. We do our best to capture that breadth every day in our edition. We are not a ‘newsletter’ or even a ‘news site’. We’re splainer.

The fab weekend edition: The splainer mantra is ‘knowledge+delight+community’. Our new Advisory edition doubles down on delight. Each Saturday morning, we will drop a weekend edition that is brimming with recommendations on what to watch, listen and read—along with travel, art, food and culture. We’ve shown you an example of what it will look like—using archival content—for now. But this Saturday onwards, you will experience the real thing with brand-new content.

Where’s that single scroll? splainer today resembles a daily magazine more than a newsletter. Our content has grown far too much to accommodate in a single-page template. The new edition format lets you see what it contains each day—but also lets you jump back and forth with ease, thanks to that nifty floating menu on the right. And the many boxes of content from our archives surfaces past content—ensuring that you don’t miss out on the good stuff just because you skipped an edition or two.

Pesky, pesky bugs: As I said before, we didn’t just get a new paint job, we’ve moved into a brand new home—with all the ‘settling in’ issues it entails. We will be hunting down bugs for the next week, sorting each issue one by one. Please help us get this done by reporting any problems over at talktous@splainer.in. Send us a screenshot, URL and the device you are using. If it is easier, you can also join our WhatsApp broadcast list—which sends out the link to the daily edition—and dump it there.

Tell me what you think? Here’s my email: lakshmi@splainer.in. And if you love the new splainer, please be sure to also shout it from the rooftops lol!

In other surprising football news: Cristiano Ronaldo has been offered a 3.5-year contract worth more than $119 million a year from an unlikely source: the Saudi football club Al Nassr. The 37-year-old Ronaldo recently left Manchester United after giving a TV interview complaining about his club—and may be looking to make the most (literally) of his remaining professional career. As for the Saudis:

Saudi Arabia, meanwhile, are hopeful that Ronaldo's presence in their domestic league would help a bid to host the 2030 World Cup and would be keen for the former Real Madrid and Juventus forward to work as an ambassador for the country.

But he hasn’t made up his mind yet. CBS Sports has more on this scoop.

The Adani takeover: The end of an NDTV era

The context: Back in August, Gautam Adani acquired a company called RRPR—which holds a 29.18% stake in the broadcasting company in the first big move to take over the channel. How Adani gained that stake is a convoluted story that dates back to a hefty loan of Rs 3.5 billion (350 crore) taken by NDTV from a Reliance-controlled entity in 2009. We explained this in detail in this Big Story.

What happened now: On Monday, founders Prannoy and Radhika Roy finally transferred the shares to Adani—after a four-month tussle. The Roys have resigned as directors of RRPR—but they still hold a direct 32.26% stake in NDTV. Also out the door: the channel’s greatly beloved anchor Ravish Kumar. Indian Express explains why the Roys are unlikely to hold on to NDTV. Soutik Biswas in BBC News looks at what an Adani-owned NDTV may look like. Reuters and the Hindu explain the transfer of shares.

Speaking of the Adani Group: It emerged as the highest bidder for a massive redevelopment project to transform Dharavi—which is also home to Asia’s largest slums. Adani’s winning bid of Rs 50.6 billion (5,069 crore) beat out its nearest competitor DLF. The entire project will cost Rs 200 billion (20,000 crore)—and will be completed in seven years.

The plan is to rehabilitate the 650,000 slum residents who live in the 2.5 sq km area—though details are not available. But this detail caught our eye: “The Dharavi Redevelopment Project will help the Adani Group to book high revenues by selling lakhs of square foot of residential and commercial space in central Mumbai.” (The Print)

The Indian economy slows down

It grew by 6.3% in the July-September quarter—which was lower than expected. The rate is much lower than the 13.5% year-on-year growth between April and June. The main drag on our growth: eight key infrastructure sectors—which only expanded by a measly 0.1%. Mining and manufacturing actually shrank by 2.8% and 4.3%, respectively. The saving grace: a 9.7% increase in private consumption expenditure—the money we spend that accounts for 55-60% of GDP.

That said, even though predictions for future growth rates remain modest, they will be significantly higher than every other major economy. Mint explains the role of private consumption—and the slowing infrastructure growth. Agence France-Presse has the big picture.

A new Pew Research report found that India had the highest rate of religious tensions in the early months of the pandemic in 2020. We scored 9.4 out of 10 on the Social Hostilities Index (SHI). The SHI measures “acts of religious hostility by private individuals, organisations or groups. The index comprises 13 metrics, including religion-related armed conflict or terrorism and mob or sectarian violence.” Ours was the highest/worst score—followed by Nigeria and Afghanistan. Mint has more details.

Meanwhile, in the US: The Senate made a big move to preserve marriage equality from future Supreme Court rulings—and a Roe-like debacle that overturned abortion rights. It passed the Respect for Marriage Act by 61-36 votes. The bill does not require states to legalise same-sex marriage—but all of them must recognise unions registered in other states. The House is also expected to pass the bill in a hurry—before the Democrats lose their majority in the next session of Congress. (Reuters)

Spotify: Most boringly, Bad Bunny is the most streamed artist of the year on Spotify—for the third consecutive year! The rest of the top five include Taylor Swift, The Weeknd and K-Pop icons BTS. The most streamed song: Harry Styles’ ‘As It Was’. Meanwhile in India, Arjit Singh ruled the roost—again for the third year in a row—followed by Pritam and AR Rahman.

ICYMI: A new feature for Spotify called Instafest that lets you see your most-played artists in the form of a three-day music festival lineup. USA Today has the deets. FYI, Instafest isn’t created by Spotify itself but by a third website that you can check out here.

Apple: is trying to up its game this year with a revamped Apple Music Replay:

This year’s redesigned Replay includes more data-heavy, shareable features, like a personalized highlight reel of top artists, songs, albums, genres, and total minutes listened. Fans in the top 100 of an artist or genre will be able to see their standing, and users can track how their listening habits change until December 31.

FYI: The Kid Laroi and Justin Bieber took the #1 spot on Apple Music’s list with their collab “Stay.” Variety has more on the rest.

Where in the world is Jack Ma?

Once the most visible icon of Chinese corporate power, the Alibaba founder rapidly fell from grace last year. He stepped down as chairman soon after criticising government policies—which have ruthlessly reined in China’s biggest tech companies and their owners. Ma’s own net worth has halved from $50 billion to $21.7 billion. Ma has since disappeared from public view—and his activities have been a source of great speculation.

Turns out, he has been living a quiet—and luxurious life—in Tokyo with his family for the past six months. The only interesting bit in this Financial Times exclusive (paywall): “Others said that Ma had used his time in Japan to expand his business interests beyond the core ecommerce technologies of Alibaba and Ant, and into the field of sustainability.” The Guardian has the non-paywall curation.

The best cities for expats

InterNations—the world’s largest expat community—released its rankings on the best and worst places to live. Topping the list of expat-friendly cities: Valencia, Spain—followed by Dubai and Mexico City. At the bottom: Johannesburg, Frankfurt and Paris. Johannesburg rated low on quality of life and working life, while Frankfurt and Paris fared poorly in the Ease of Settling In index. Forbes has lots more on why Valencia is the surprise winner—and why Miami and New York City made the top-20 cut. Nope, there is no Indian city on the list. You can read the report here. (Bloomberg News via NDTV)

One: Beijing has never been at a loss for words when defending itself from international criticism. So it’s quite astonishing to see this Chinese official’s response to a simple and obvious question about the zero Covid policy. The silence is long—and the hangdog look on his face… (Sky News Australia)

Three: On Sunday, the largest active volcano in the world—Hawaii’s Mauna Loa, erupted for the first time after 38 years. Mercifully, it didn’t cause any damage. Below is the aerial footage of the lava. (Science Alert)

Four: Megan Thee Stallion became the first Black woman to appear on the cover of Forbes’ 30 Under 30 magazine. Yay! Read the accompanying cover story over at Forbes. 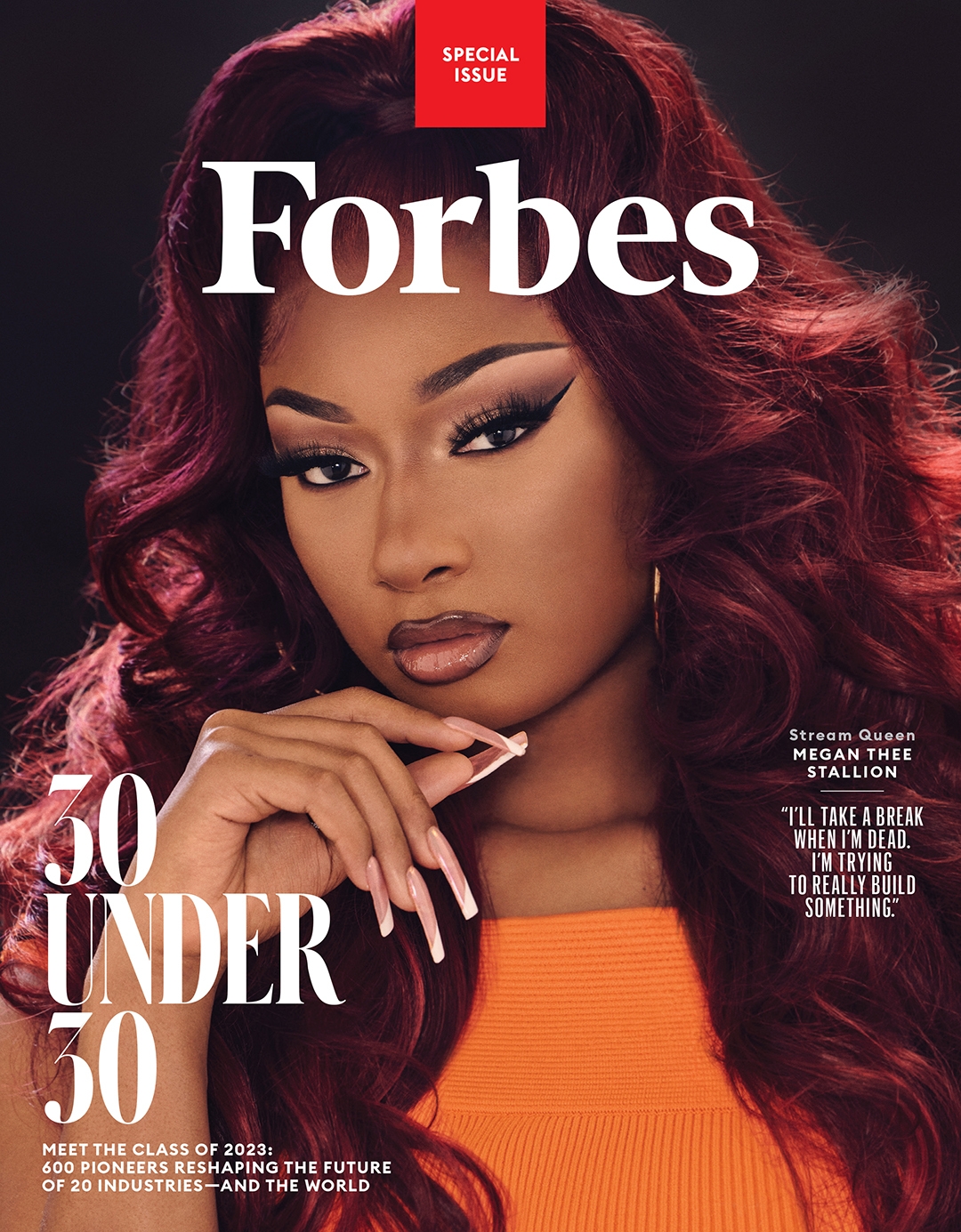