Quick context: Rohingyas are a Muslim minority—who have been persecuted and killed by the military junta in Myanmar. Many have fled over the border to India—and live in refugee camps in Kolkata and Delhi. Their legal status in the country has long been controversial—and the government has deported a number of them back to Myanmar. (For more: read our Big Story)

The controversy: It all started when housing minister Hardeep Singh Puri praised the “landmark decision” to move Rohingya refugees in Delhi into subsidised housing. But in the afternoon, rightwing BJP leader Kapil Mishra (who is not a minister) dismissed the claim, saying: “There will be an official clarification soon.”

The Home Ministry soon after denied the “media reports”:

Irony alert: In his tweets, Puri boasted: “Those who made a career out of spreading canards on India’s refugee policy deliberately linking it to #CAA will be disappointed.” Unnamed BJP sources claim the government did a U-turn due to the Right-wing ecosystem. Why this matters: it is unusual for a cabinet minister to be publicly caught on the wrong foot on a key policy. (The Telegraph)

A new US report found that Indian cities are the worst in the world when it comes to pollution caused by fine particulate matter (PM2.5). These are microscopic particles of soot etc. that invade lungs—and cause serious diseases. Delhi and Kolkata were #1 and #2 in the top ten list.

But we are doing better than the rest of the world in terms of nitrogen dioxide—which is not as unhealthy but can cause respiratory problems—and mainly attributed to use of old fuels in vehicles. On this list, Shanghai is #1—followed by Moscow and Tehran. India is nowhere in the top 20. The Hindu has more on India—while The Guardian offers a global overview.

Speaking of worrying studies: A Rutgers University simulation is the first to document the effects of nuclear war on the world. A hypothetical conflict between the US and Russia would release 150 million tons of soot—causing severe global cooling—which would cut the global food supply by 90%. In the case of India vs Pakistan, that number would range from five and 47 million tons of soot. The only nation that has some measure of safety: Australia. (Futurism)

A new poll of Tory voters shows that Liz Truss has a huge lead over Sunak in the race to be elected as the next UK prime minister. She has 60% compared to Sunak’s 28%. Notably, this isn’t just an opinion survey—since 60% of the respondents said they have already voted. Polling of party members closes on September 2, and results will be declared on September 5. In other words, a desi-born UK PM looks highly unlikely. (The Telegraph)

In 2020, a PhD student studying in the UK went home to Saudi Arabia for a holiday—when she was arrested. The crime: using her Twitter account to occasionally retweet tweets by Saudi dissidents living in exile—and supporting feminists targeted by the regime. She was first sent to prison for three years for the “crime” of using an internet website to “cause public unrest and destabilise civil and national security.”

But an appeals court on Monday increased her jail term to 34 years—for no discernible reason. As one Saudi exile explains: “her sentencing is intended to send shock waves inside and outside the kingdom—dare to criticise MBS and you will end up dismembered or in Saudi dungeons.” And since it happened right after President Biden’s visit to the country, there’s a message in there for the US as well. (The Guardian)

A 23-year-old co-pilot in North Carolina simply opened the door of the plane—and jumped to his death.

“‘Crooks lowered the ramp in the back of the airplane, indicating he ‘felt like he was going to be sick and needed air’… The (pilot-in-charge) stated that the (second-in-charge) then got up from his seat, removed his headset, apologized, and departed the airplane via the aft ramp door,’ the report said.”

What’s more alarming: the plane was being used to ferry skydiving groups—and was on its way to pick up passengers. (CNN)

New research shows that ants are far better at protecting crops than pesticides—and far less toxic. An analysis of 17 crops found that they are better at killing pests, reducing plant damage and increasing crop yields. And they are far cheaper. Euronews has more details.

One: Ameca is a humanoid robot that can make a wide range of facial expressions. Unveiled last year, it freaked out many humans by looking, well, too human. Ameca is back with 12 new tricks up its sleeve—including expressions of disbelief, disgust, pain— and even what can only be described as regret. And yeah, it’s as creepy as ever. (Futurism)

Two: NASA kicked off its mission to return to the moon—as its 98-metre-tall rocket finally reached the launch pad. On August 29, the Orion will head out on its mission, but without any humans. It will instead carry 120 pounds (54.4 kilograms) of mementos—and three mannequins: “Sitting in the commander's seat of Orion will be Commander Moonikin Campos, a suited mannequin that can collect data on what future human crews might experience on a lunar trip.” You can see Mr Campos below. (CNN) 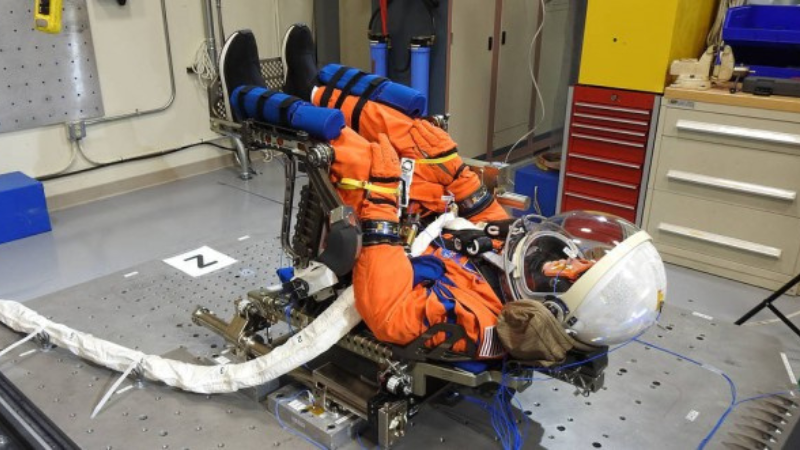