Related thing to see: In Helsinki, rows of 210 pairs of small shoes were placed alongside candles to mark the number of children killed in Mariupol. 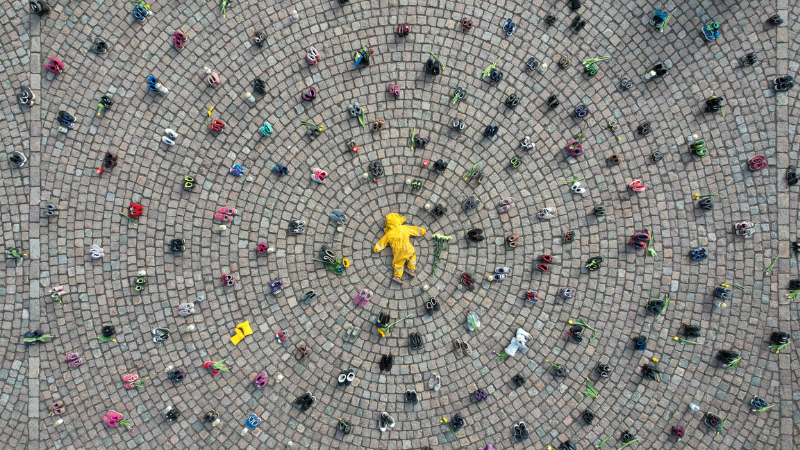 In Russia, influencers are furious at Chanel—which not only shut down its stores but also made it clear that its products will not be sold elsewhere in the world to those who intend to take them back to the country. The fallout: angry Russians destroying Chanel bags on camera:

Editor’s note: If you need more context, we highly recommend reading our Big Story on the historical roots of the conflict, effectiveness of economic sanctions, return of the Cold War, what is driving Vladimir Putin, India’s “balancing act” and the looming oil crisis.

The company tried to tame the rampaging tech billionaire—and its largest shareholder—by offering him a seat on the board. The reason: Taking that gig would require Musk to act in the best interest of a company and its shareholders. But Musk has instead been busy tweeting wild polls on turning Twitter’s San Francisco HQ into a homeless shelter. Yesterday, CEO Parag Agrawal tweeted a statement saying that Musk “has decided not to join the board”—for reasons yet to be disclosed. He responded to Agrawal’s announcement with a single emoji: 🤭—but later deleted that and other Twitter-related tweets.

What this may mean: By not joining the board, Musk is no longer bound by a “standstill agreement” which stipulates that he will not expand his stake in the company beyond 14.9%. So his future intentions remain unclear—if not ominous to some industry observers:

“This now goes from a Cinderella story with Musk joining the Twitter Board and keeping his stake under 14.9% helping move Twitter strategically forward to likely a ‘Game of Thrones’ battle between Musk and Twitter with the high likelihood that Elon takes a more hostile stance towards Twitter and further builds his active stake in the company.”

The country witnessed a number of nasty incidents—triggered by Ram Navami processions passing near mosques or Muslim neighbourhoods. Typically, provocative songs or slogans were raised—and in some instances, mosques were pelted with stones. This in turn led to violent confrontations between members of the two communities. These occurred across the country—including Gujarat, Madhya Pradesh, Jharkhand and West Bengal.

More unexpected is the sudden outbreak in Mumbai—where men returning from a Ram Navami celebration yelled ‘Jai Shri Ram’ outside a mosque. Then this happened:

“One person on the bike was roughed up by the crowd outside the mosque, an officer said. The eight then left and returned within 20 minutes accompanied by a crowd of over 25 persons armed with rods and sticks. ‘Since they could not find the crowd of people with whom they fought, they started destroying bikes, cars and autorickshaws that were present at the spot. The vehicles belonged to locals belonging to both communities,’ the officer said.”

Why this matters: This is now becoming a daily pattern—which is very, very worrying. (Indian Express)

Is India downsizing its army?

While the government denies it, analysts believe that the government quietly is doing its best to shrink the armed forces. New recruitments have been suspended for two years—supposedly due to the pandemic. But they are unlikely to resume—and for several good reasons. One: An expanding bill for salaries and pensions that consumes more than half of the $70 billion (Rs 7,000 crore) defence budget—which leaves little money for the more pressing job of modernising the military. Two:

“The forces of the 21st Century require quick response by agile armed forces backed by state-of-the-art military technology—more so in the subcontinental context, where nuclear weapons preclude large-scale conventional wars.”

More debatable: the plan to create temporary recruits who only serve three years—and leave them jobless thereafter: “Do you really want to put out so many people who are well trained in arms to look for jobs in a society where levels of violence are already so high?” BBC News offers an interesting analysis of the dilemma. We also recommend reading retired Lt General HS Panag’s view in The Print.

Scientists discovered that birds who live in an environment of fear pay a high price—which is passed forward to the next generation. They played sounds of predators—a mixtape of terror made up of various sparrow eaters, from crows and hawks to raccoons and owls—to song sparrows for four months. The result: The scared birds laid and hatched 53% fewer eggs. More notably, fewer of these offspring survived—and the knock-on effect reduced the sparrow population in half in just four years:

“Those young sparrows that successfully grew up in this atmosphere of fear remained at a disadvantage into adulthood. Even though these birds were not themselves exposed to the scientists’ track, these birds sang fewer songs, lived shorter lives, and produced fewer offspring. By changing the way one generation of sparrows performed as parents, fear appeared to have a cumulative effect that spanned generations.”

What this shows: “your early rearing condition leaves an imprint on you for your entire life”—which likely holds true for mammals and humans too. (Hakai Magazine)

In other animal-related news: The Spanish police uncovered Europe’s biggest taxidermy haul—1,000 stuffed animals that include rhinos, elephants and polar bears—and a number of endangered and extinct species. The collection would be worth €29 million ($31.5 million) in the black market. See the tragic haul below. (Deutsche Welle)

Speaking of less exotic beasts: A new study shows that how you feed your pet, clean their bowl and store their food can have a significant impact on health—both yours and that of your pet. Why this matters: “Pet food dishes have ranked highly among most contaminated household objects, sometimes even having bacterial loads close to those of toilets.” FYI: If you need it, the US health guidelines on how to handle pet food are here. (CNN)

One: Hindutva leader Bajrang Muni recently issued a rape threat aimed at Muslim women—and the Uttar Pradesh police registered a case against him. And yet he has not been arrested. On Monday, Muslim women in Khairabad led a protest demanding justice, chanting “baba ki gundagardi nahi chalegi.” (Siasat Daily)

Two: Pilgrims to the Baba Baidyanath temple in Jharkhand were plunged into a nightmare when two ropeway trolleys collided midair—when a pulley became stuck. Two people have died—including one man who fell from the rescue helicopter. Authorities have finally managed to rescue 32 people—while 15 are still stranded. FYI: The 766-metre Trikut ropeway is India's highest vertical ropeway. See the stranded trolleys below. (The Telegraph)

On the latest episode of the splainer podcast ‘Press Decode’, the splainer team looks at what constitutes a war crime—and the gender gap in sports, especially cricket. Be sure to head over to the IVM website, Spotify or Apple Podcasts to listen to it.