The Category 4 storm devastated the southwest coast of Florida—and has now changed into a Category 1 hurricane as it heads towards South Carolina. At least 17 people have been reported dead—though the final toll is still unknown. It has left 2.7 million people without power.

Related reads: New York Times has more on what happened yesterday in Florida. BBC News looks at the devastation in Cuba. Alejandro De La Garza in TIME looks at why climate change is producing more intense storms. CNN has the latest updates.

Something to see: Here’s Weather Channel reporter Jim Cantore was reporting live during the storm:

And this alarming view was captured by a camera six feet off the ground:

Rajasthan Chief Minister Ashok Gehlot has pulled out of the race to become the next president of the Congress party. He apologised to Sonia Gandhi for the show of defiance by his supporters in the state—and offered to resign as CM. She is expected to decide the matter in a couple of days—leaving the door open for more chaos in one of the rare states ruled by Congress.

Rumours are that the Gandhi family’s plan B pick is likely to be Mallikarjun Kharge—who is currently the leader of the opposition in Rajya Sabha. Another name making the rounds: Mukul Balkrishna Wasnik—a Dalit leader from Maharashtra. For now, the only two confirmed candidates in the election for the top post are Shashi Tharoor and Digvijaya Singh. Indian Express and The Telegraph have more details.

A dismal report on environmental activists

According to a new report, more than 1,700 environmental and land activists have been killed across the world over the past 10 years. Brazil tops the overall list with 342 murders since 2012—with 85% of them occurring inside the Amazon forests. The worst offender in 2021: Mexico—where 54 were killed in a single year. In India, the number jumped from 20 to 26 in a single year. Unsurprisingly, 40% of those killed were indigenous people—who represent only 5% of the world's population. (Al Jazeera)

Mukesh-bhai has rolled out a new premium apparel store called Azorte in Bangalore—as homegrown competition to the likes of Zara and Mango. It will offer “contemporary Indian fashion with an original take on style ranging from western and Indian wear” targeted at Gen Z and Millenials—plus tech-forward features such as smart trial rooms and self-checkout kiosks. The company plans to launch 40 stores across 12 cities over the next nine months. (Indian Express)

Hilaree Nelson was the first woman to climb the two of the world’s tallest mountains—Mount Everest and neighbouring Mount Lhotse, in a 24-hour period. She is known as “the most prolific ski mountaineer of her generation.” Nelson died in an avalanche while skiing from the 26,781-foot Himalayan summit of Manaslu—world's eighth-highest mountain. FYI: Manaslu is called "killer mountain" and has claimed the lives of more than 72 mountaineers. (Washington Post)

Also making unhappy news: MacKenzie Scott, the ex-wife of Jeff Bezos. She has filed for divorce from her second husband Dan Jewett whom she married in 2021. Scott has erased his name from their joint philanthropic ventures, her author bio on Amazon-–and even a recent Medium post about her charitable activities. (New York Times)

The magazine’s annual list of emerging leaders from around the world has only one Indian: Akash Ambani—who is described as "the scion of Indian industrialist royalty.” The one Indian American: Amrapali Gan—the CEO of OnlyFans, the platform favoured by creators of sexual content. Can’t wait to see the NRI uncles and aunties boast about that one:). Also notable: the inclusion of Pakistani singer Ali Sethi who made global headlines with his hit ‘Pasoori’. Check out the entire list over at TIME.

One: The Archaeological Survey of India (ASI) has discovered 46 new sculptures—dating back to the 9th century—in the Bandhavgarh Tiger reserve in Madhya Pradesh. These include “possibly the world's largest” sculpture of Varaha—the third Avatar of Hindu god Vishnu. Also uncovered: two temples from the same era and Buddhist caves and stupas from the 2nd century. (The Hindu) 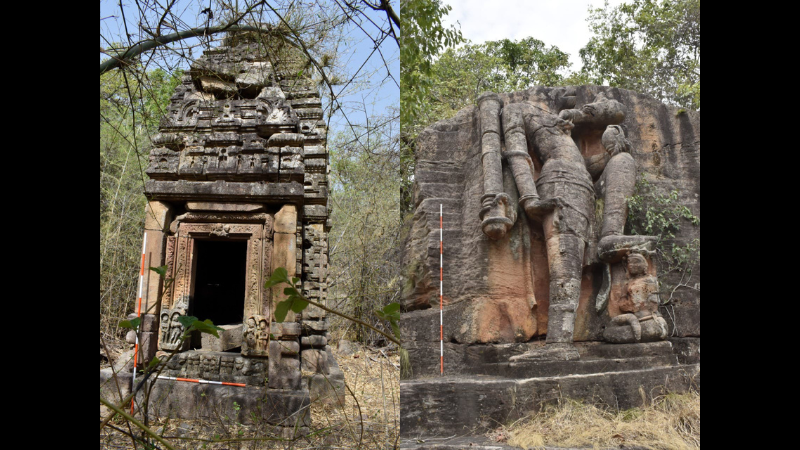 Two: Here’s Lizzo playing an extremely rare 200-year-old crystal flute that belonged to former US President James Madison at the Library of Congress. She also briefly played the delicate instrument during a concert, saying to the audience: “B***h, I’m scared. It’s crystal. It’s like playing out of a wine glass, b***h, so be patient.” (CNN)