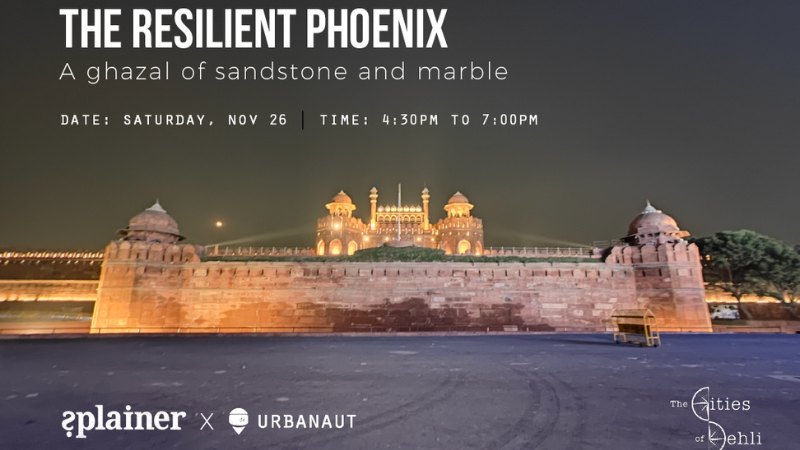 We only have two spots left for our fabulous Red Fort experience. And bookings are now open to everyone—and not reserved just for splainer subscribers. If you want to grab a spot, we suggest you do it soon. We expect this experience to sell out fairly fast.

The event:  We are hosting our first ever offline experience—created in collaboration with our partners Urbanaut and Cities of Dehli. It includes a unique immersive visit to the recently opened Dalmia Museum, an unforgettable after-hours viewing experience of the lit up Fort when the sun goes down. The icing on this cake: ending the evening at the rooftop of one of Chandni Chowk’s treasures, Gumbad Cafe—nibbling on appetisers as you admire its stunning views of the Jama Masjid. We have an extended description with lovely pictures, maps and photos right here.

A catastrophic earthquake in Indonesia

A powerful 5.6-magnitude earthquake struck Java—killing at least 162 people. A great many are children: “Many of the dead were public-school students who had finished their classes for the day and were taking extra lessons at Islamic schools when they collapsed.” A lot of people are still trapped beneath the rubble—and there are fears that the final death toll will be much higher. Hundreds of buildings collapsed—and the tremors triggered landslides. The hospital itself was damaged making rescue efforts very difficult. This was an especially destructive quake since it was “shallow”:

“Particularly worrisome was that Monday’s quake was very shallow, occurring at a depth of only six miles, according to the United States Geological Survey. Shallow quakes can often be more destructive than deeper ones because the seismic waves travel a shorter distance to the surface, losing less energy along the way.”

FYI, Indonesia experiences frequent seismic and volcanic activity due to its position on the Pacific ‘Ring of Fire’—where tectonic plates collide. New York Times and CBS News have more details and photographs. You can see the extent of the damage below.

Disney has a new/old chief

The Mickey Mouse company has reappointed Bob Iger as CEO—kicking out Bob Chapek who took over from him in 2020. The unusual and unexpected move has shocked Hollywood—and seemingly even Iger who said he is returning “with an incredible sense of gratitude and humility—and, I must admit, a bit of amazement.”

So why the throwback move? One reason: Disney's stock witnessed its biggest drop in 21 years earlier this month. Also: while its streaming platform is outperforming its rivals—adding 235 million subscribers across Disney+, ESPN and Hulu—the company’s streaming losses have grown to nearly $1.5 billion. Iger is presumably coming back to deliver his old magic—but for a limited tenure of two years. Hollywood Reporter and Axios have more.

Doing far worse: FTX—which owes its top 50 creditors over $3 billion, according to new regulatory filings. Reminder: FTX was once valued at $32 billion. ICYMI: We did a two-part series on the collapse of crypto. Part 2 has everything you need on the FTX mess. (CNBC)

The company has increased the price of its minimum recharge for a 28-day mobile phone service plan by about 57% to Rs 155 in Haryana and Odisha. And it may soon roll out the hike to the rest of the country. It will also axe all its cheaper 28-day plans—including basic SMS services. Point to note: if this trial run works, expect its rivals to follow suit. (The Telegraph)

The Indian government has announced voluntary standards to fight the menace of fake product reviews on ecommerce websites. It sets out basic guidelines: “The reviews should be legitimate and the process of collecting, moderating and publishing of consumer reviews should be accurate [and]...it should not be misleading… [P]rotection of review authors’ personal information should be ensured.” It’s not entirely clear how these standards will be enforced or monitored. Indian Express has more details.

A new study revealed that 53 species of turtles which were thought to be mute are actually quite chatty. It found lungfish and caecilians—limbless amphibians that look much like worms—also make sounds. However, critics point out that just because an animal makes sounds doesn’t mean it’s trying to communicate. Authors of the study say recognising the very fact that these species—and potentially many others—are not mute is the first step toward figuring out whether they are trying to communicate. Why this is awesome: "Sometimes it's surprising how much we still don't know about things that aren't necessarily uncommon but live alongside us.” FYI: this is what a southern New Guinea turtle sounds like, while caecilians sound like this. (NPR)

“People found that it made up fake papers (sometimes attributing them to real authors), and generated wiki articles about the history of bears in space as readily as ones about protein complexes and the speed of light. It’s easy to spot fiction when it involves space bears, but harder with a subject users may not know much about.”

Meta has now withdrawn Galactica—and thanked everyone for their feedback. One reason why these AI experiments keep failing: “Language models are not really knowledgeable beyond their ability to capture patterns of strings of words and spit them out in a probabilistic manner. It gives a false sense of intelligence.” (MIT Technology Review)

In the 1950s, scientists developed atomic clocks to more accurately measure time—they realised that there was a growing lag between their clock time and astronomical time. The reason: Earth is slowing down (for reasons explained in our Big Story on leap seconds). So they periodically started adding ‘leap seconds’ to keep them in sync.

Unfortunately, this totally messes up tech devices—triggering a massive outage at servers owned by companies like Reddit and Mozilla in 2012. Back in July, Meta and other big tech companies like Google and Amazon teamed up to campaign against adding leap seconds—arguing that a scientific norm invented in the 70s is impractical in a digital world. And they’ve now got their wish. The leap second will become history in 2035—until at least 2135. Meanwhile, scientists will have to find another way to sync time. (New York Times)

A row over a T-Rex skeleton

Christie’s has withdrawn the sale of a T-Rex named Shen just ten days before a Hong Kong auction. The reason: a number of the bones in the 1400-kg skeleton may be fake. In fact, they are suspected to be replicas made from another T-Rex called Stan—which was sold for a record $31.8 million back in 2020. To be clear, it is impossible to find intact skeletons of dinosaurs—and they include casts of other specimen’s bones or reconstructed additions to make them look complete. But Christie’s claimed at least 54% of Shen was original—which appears to be untrue. That said, Shen still looks awesome—though he probably won’t fetch the estimated $15-$25 million selling price.  (New York Times) 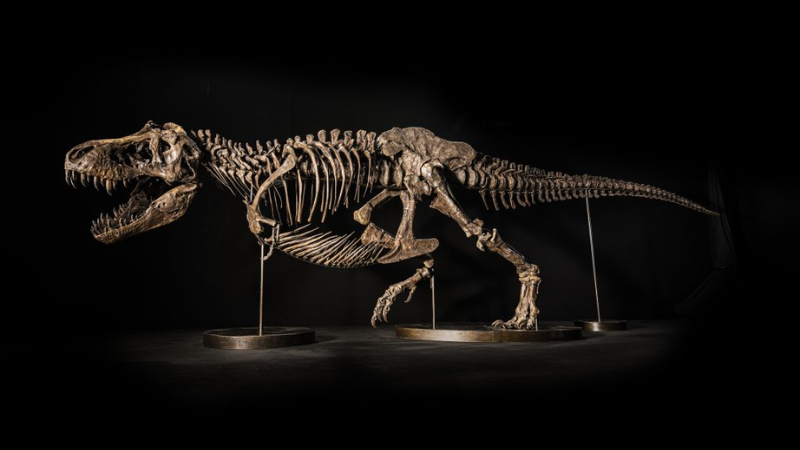 One: As we noted in our ‘quote of the day’, Iranian players at the World Cup bravely offered support to their fellow citizens being killed or jailed back home—despite the risk of harsh penalties. Watch all 11 players refuse to sing the national anthem before the game with England. FYI: they lost the game 6-2. (Reuters)

Two: This pretty bird—known as the ​​black-naped pheasant-pigeon—was spotted by scientists for the very first time after 140 years—off a small island in Papua New Guinea. The leader of the expedition said it felt like “finding a unicorn.” Point to note: the bird was only just ‘found’ by researchers—the locals had, of course, seen it around for decades. (BBC News)