Here’s an introduction to a gorgeous Persian album of paintings and calligraphy that captures the great beauty of Ghalib’s poetry.


In the wake of the Partition in August 1947, when Basant Kishan Khanna and Leelavati fled Lahore with their children, they carried with them a copy of ‘Muraqqa-e-Chughtai’. This book—now displayed at the Partition Museum in Amritsar—must have been a prized possession to have travelled across borders in a time of great chaos and tragedy.

The ‘Muraqqa’ (the Persian term for an album of paintings and calligraphy) is a symbol of the rich literary culture of Lahore. This rare book—the creation of the artist Abdur Rahman Chughtai (1897 - 1973)—is described in the foreword by the poet Mohammad Iqbal (of ‘Saare jahan se achha’ fame) as “a unique enterprise in modern Indian painting and printing.” And unique it is.

The Muraqqa is a visual interpretation of Ghalib’s ghazals and a special tribute to one of the greatest Urdu poets. Through his illustrations, Chughtai depicted select verses from the ‘Diwan-e-Ghalib’. For example:

“The rose mocks the nightingale’s flutters and whines.
What people call as ‘love’ is a frenzied state of mind.” 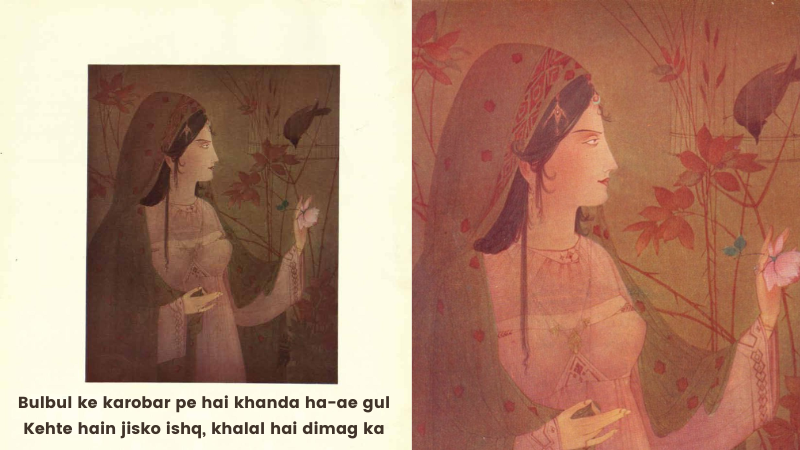 Like Ghalib’s poetry, Chughtai’s art evokes nostalgia; but while they are rooted in a bygone-culture, the poetry and art are both modern and timeless.

The first edition of the book was published in 1928, when Chughtai was only 29 years old. The design of the book (and probably the decision to call it a muraqqa) borrows from the Persian-inspired Mughal-era aesthetic. That’s not coincidental since Chughtai belonged to a Persian family of artists. His ancestor, Ahmed Chugtai, was also a reputed artist and the chief architect in the court of the Mughal emperor Shah Jahan.

The art of book-making had gained popularity during the medieval period. When Mughal princes and emperors—Akbar, Jahangir and Shah Jahan—inherited libraries, they signed the manuscripts, indicating ownership. With their patronage, several works of literature were illustrated and calligraphed—glimpses of which we can find in the South Asian collections in museums worldwide.

Through the ‘Muraqqa’, Chughtai wanted to reintroduce India to its Mughal past, aided by the printing-technology that came from Europe. And it tapped into the broader zeitgeist in Lahore, which was witnessing a revival of Urdu literature.

Today, looking at the Muraqqa, one can appreciate the beauty and ideas that form the Indian identity. Let me leave you with this one last example, inspired by the couplet:

“The horse of the times is galloping away, Let us see where it stops
The rider has neither the reins in his hands, nor his feet in the stirrup.” 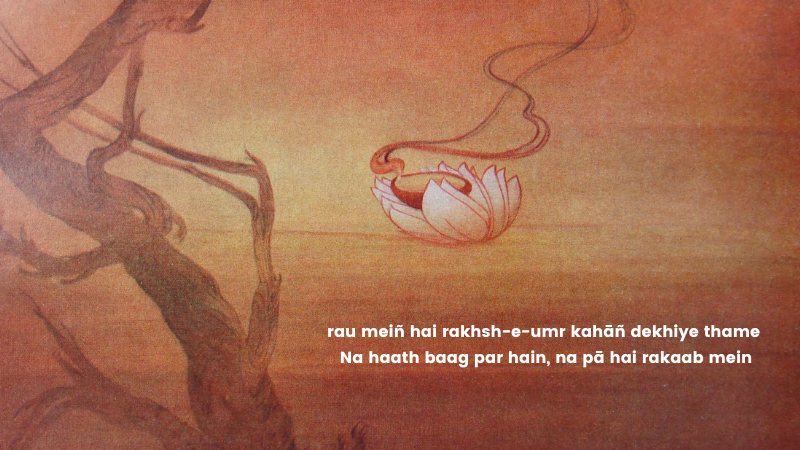 Fun fact: In the Netflix adaptation of Vikram Seth’s ‘A Suitable Boy’, Mahesh Kapoor, the politician visits his friend, the Nawab. When asked about the political situation, he quotes this same Ghalib verse, hinting at the chaos and uncertainty of the time.