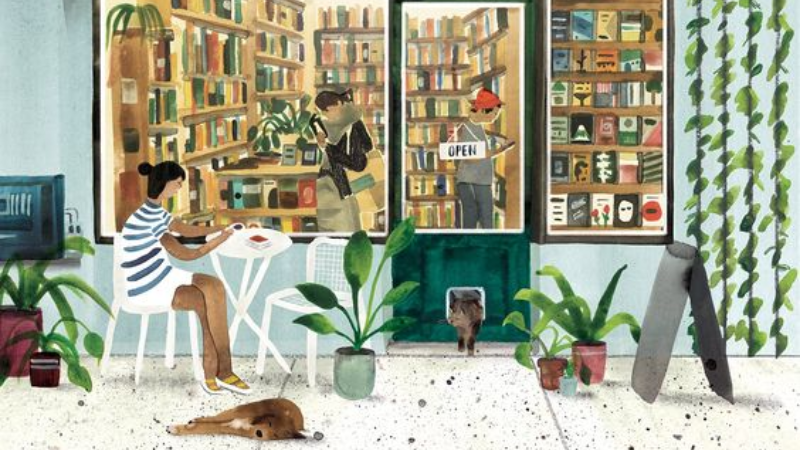 One: Book Riot has compiled a list of some of the coolest mythological creatures across literature. I personally have a soft spot for werewolves and was thrilled to see Indra Das’ ‘The Devourers’ and its lupine heroes make it to the list.

Two: My own relationship with poetry is fraught, to say the least, but here’s something for all poetry-lovers anyway: the Paris Review asked poet Terrence Hayes to make a playlist for its readers. In response, he created this playlist-poem.

Three: Grunge rounds up their best and worst Agatha Christie books. I’m not sure I wholly agree with their choices, but I do remember being incredibly confused by how much I didn’t enjoy ‘Passenger to Frankfurt’.

Four: LitHub considers famous desserts from fiction and asks: which one is likely to win ‘The Great British Bake Off’?

Five: In case anyone is planning a literary wedding and looking for a perfect idea.

Six: October heralds the “spooky season” and it’s honestly the best time to read—with the chill in the air and the perfect opportunity to get yourself the hot beverage of your choice and sit with your book—either inside or out! An excellent sub-genre to dip into at this time is dark academia. If you want to know more about it, here’s a good guide.

Seven: A classic of the sub-genre (and in its own right) is ‘The Secret History’ by Donna Tartt. On Book Riot, superfan Liberty Hardy documents her history of reading the book every year since its release 30 years ago. Here’s the first line of the book to get you hooked: “The snow in the mountains was melting and Bunny had been dead for several weeks before we came to understand the gravity of our situation.”

One: Al Jazeera has a fascinating long read on the early 20th century forensic scientist Frances Glessner Lee, “a diorama-maker, criminal investigation educator and the first female police captain in the US.”

Two: As someone who adores quizzing and the British quiz show ‘University Challenge’, this piece in The Guardian by a former participant and current question-setter really hit home.

Three: This piece in Reasons to be Cheerful about Kamikatsu, a zero-waste town in Japan, really cheered me up.

Around this time every year, I feel like reading only mysterious, spooky, atmospheric, cosy books. Towards that end, I have made a little list of books I’ll be reading over the next couple of months:

The Ghost Bride: by Yangsze Choo. In colonial Malaya, a woman is asked to marry the recently deceased son of a rich family—as per an ancient tradition—making her a ghost bride. Soon, she is haunted by the ghost of her would-be suitor, among other things.

Plain Bad Heroines: by Emily M Danforth. Over a century ago, five mysterious deaths led to the closing of The Brookhants School for Girls. Now, a new book about the “haunted and cursed” institution brings it back into the limelight, leading to a film adaptation, to be shot on the grounds of the locked school. Grim things ensue.

Broken Harbor: by Tana French. In a new luxury development, a man and his two children have been murdered, his wife is in intensive care. Mick “Scorcher” Kennedy of the Dublin Murder Squad thinks it is an easy solve, but there are too many details that don’t add up. On top of that is Scorcher’s own haunting past that existed in an older version of the same neighbourhood where the murders took place.

The Essex Serpent: by Sarah Perry. Cora Seaborne, at the end of the 19th century, is searching for the famed Essex Serpent, but the book is so much more than that. It is a study of faith and reason and explores themes of love, friendship, desire and fear.

Currently reading: I’m a straggler to this party, but I’m so glad I’ve finally made it—I’ve just started ‘The Three Body Problem’ by Cixin Liu, tr. by Ken Liu. It’s a modern science fiction classic that follows a secret military project in China that’s trying to make contact with aliens. So far, I’m finding myself completely immersed in it despite unfamiliar surroundings. The translation is also superb. Can’t wait for the Netflix adaptation that’s in the works!

Bookish adaptation: I’ve been a huge Mike Flanagan fan ever since The Haunting of Hill House came out (Midnight Mass was one of my favourite shows of last year), so I obviously inhaled The Midnight Club that dropped on Netflix last Friday. At a hospice meant for terminally ill young adults, seven boys and girls form the Midnight Club, meeting every day at midnight to tell each other scary stories. But the hospice building is an isolated house with a mysterious history, and soon bizarre occurrences begin to trouble the patients. It wasn’t as amazing as the last three entries in the Flanaganverse, but still great. Based on the popular book of the same name by Christopher Pike.