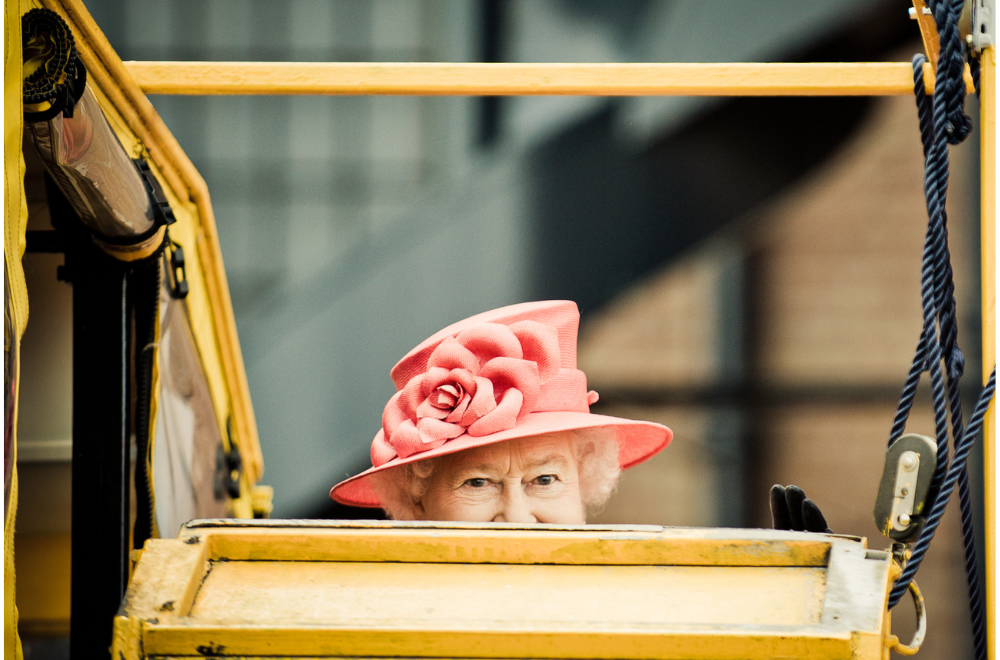 The Queen is dead, all hail the King!

Queen Elizabeth II died at the age of 96—ending an astonishing 70-year reign. It marks the end of an era—for the royal family, Britain and perhaps the world—which has changed so very much since she first ascended the throne. We take a look at her life—and what’s next for the Windsors.

Origin story: Elizabeth was born on 21 April 1926—the first child of the Duke and Duchess of York—and third in line for the throne. She never attended school and at the age of six, her life’s ambition was to become a "country lady with lots of horses and dogs.” But when her uncle King Edward VIII abdicated to marry an American divorcee, Wallis Simpson—her father took his place. At the age of ten, she became a queen-in-waiting—and was reportedly seen by her grandmother to be “ardently praying for a brother” at night. You can see her below at the age of one—and later with her pet corgi. Town & Country has a lovely collection of vintage photos, as well. 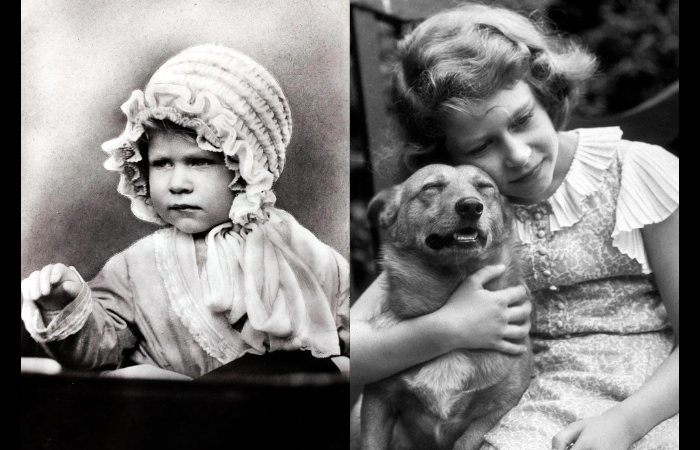 A charming bit of trivia: Little Elizabeth learned early to tune other people out—a trait that would serve her well during the most tumultuous years as Queen:

“That ability to compartmentalise developed at an early age, when she would imagine herself as a pony. ‘When someone called her and she didn’t answer right away,’ recalled her cousin Lady Mary Clayton, ‘she would then say, ‘I couldn’t answer you as a pony’.”

Love story: This may seem a little creepy to modern readers, but Elizabeth met and developed a crush on Phillip—her third cousin—at the age of 13. By the time she turned 18, they had been corresponding, meeting often and were in love. The family was not pleased with her choice of an impoverished Greek prince:

“Philip was not in the list of the top dozen eligible suitors and there were attempts by her parents to put her off him. Even palace servants sneered at him when he turned up to stay at weekends because of the holes in his shoes, his lack of spare clothes and unsavoury relatives—his older sisters had married German Nazis, though Philip himself had served with distinction in the Royal Navy.”

Nevertheless, he proposed in 1946—and they married a year later. While there have been plenty of questions about Phillip—including his rumoured infidelity and seeming racism—there has never been any doubt about the lifelong love they shared.

Here they are square-dancing while on a Canadian tour: 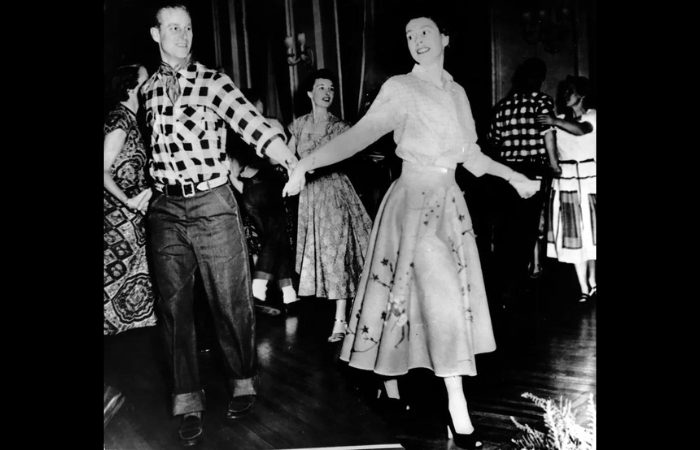 Amusing bit of shaadi trivia: Gandhi-ji sent the happy couple a “hand-woven table doily, said to have been mistaken by a horrified Queen Mary for his loincloth.”

The coronation: As everyone who has watched ‘The Crown’ knows, Elizabeth was crowned at the tender age of 25—when her father died of lung cancer. She later said: "My father died much too young, so it was all a very sudden kind of taking on and making the best job you can." 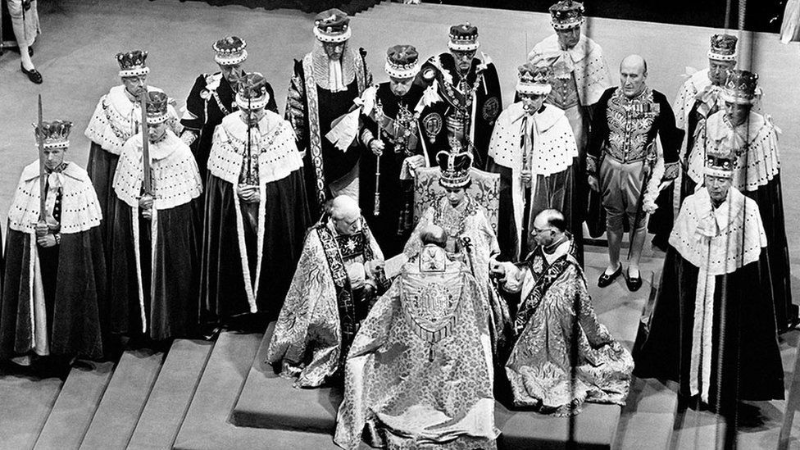 The ‘glum’ queen: Early in her reign, Elizabeth was already under pressure in the press for having “the smiling problem”:

“‘I’ve got the kind of face that, if I’m not smiling I look cross, but I’m not cross,’ she said in exasperation to one concerned aide, her jaw aching from two solid hours of grinning.

She kept on smiling, or trying to, and waving. And wearing hats, though she thought they made her ‘look like a sheep.’”

That stiff upper lip would get her in PR trouble over and again—which made a number of her decisions appear cold-hearted. For instance, her decision to wait six days to visit the scene of the 1966 mining disaster in Wales—which killed 116 children and 28 adults. More infamous is her choice to remain in Balmoral Castle with her grandchildren—cloistered and silent—after the death of Diana in 1997. At the time, the headlines blared: ‘Show Us You Care’.

FYI: A Tory historian once described her as being like “a priggish schoolgirl” with a voice that was a pain in the neck—remarks he was later forced to retract.

The goofy Queen: The other version of Elizabeth stayed hidden in Balmoral—the royal family castle in Scotland—where friends describe her “rushing around in tatty clothes, laughing, joking, joining in, singing dirty songs.” And she had a deliciously dry sense of humour, as this anecdote illustrates:

“While at a shoot on a friend’s estate, a wounded cock pheasant flew out of a hedge straight at her, flapping and clawing, and knocked her down. There was blood on her clothing from the bird and a detective standing nearby feared she had been shot. He threw himself on top of her and began giving her mouth-to-mouth resuscitation. ‘I consider we got to know each other rather well,’ she said, and hired the man for her protection force.”

And she seemed to quite enjoy the skit she did alongside Daniel Craig playing James Bond—to mark the 2012 London Olympics:

A bit of pop music trivia: She was quite fond of ‘Dancing Queen’ by ABBA—which was played at dinner parties and the military band outside Buckingham Palace:

Grandma Queen: Elizabeth was not a hands-on mother—preferring to spend time on affairs of state than with her children. She was, however, a doting grandmother—and great-grandmother, as you can see in these photos with William’s kids: George and Charlotte 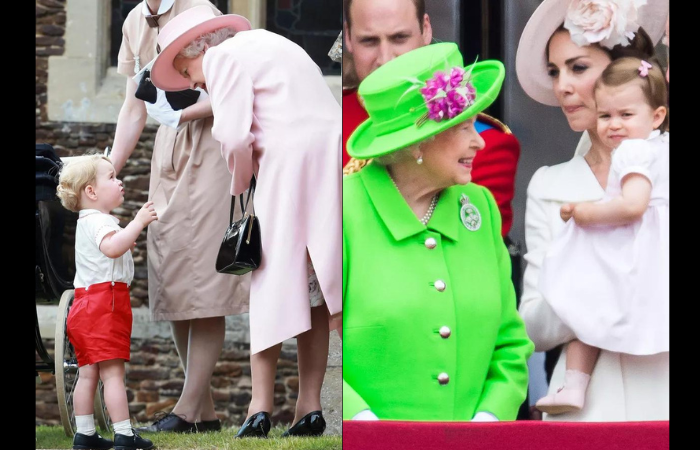 Something to watch: There are many excellent pieces on her long reign—which we’ve included in the reading list. So we’re not going to belabour the details. But here’s a video of key moments:

The end: According to a clergyman who spent the previous weekend with the Queen, she remained “full of fun” and the “life and soul of things” almost to the end. In a break of royal protocol, the Palace first shared the news of her death on Twitter—and not on a TV broadcast.

The reactions: Of course, there were a flood of tributes from around the world—and from Charles. And TIME has already tweeted its magazine cover. But the one that caught our eye is this image shared by Disney—which pays tribute to a skit the Queen performed alongside Paddington Bear during the recent platinum jubilee celebrations: 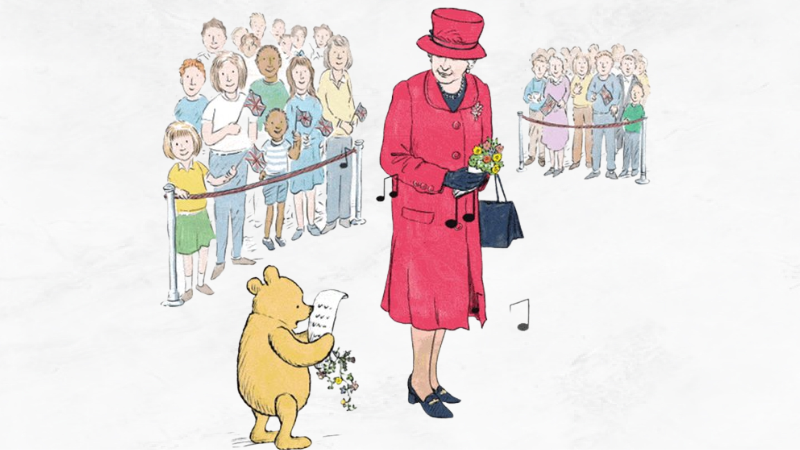 The double rainbow: People gathered in great numbers outside Buckingham Palace to pay their respects—singing the national anthem ‘God Save the Queen’:

And as they came together, Mother Nature also put on a show—painting a double rainbow across the skies: 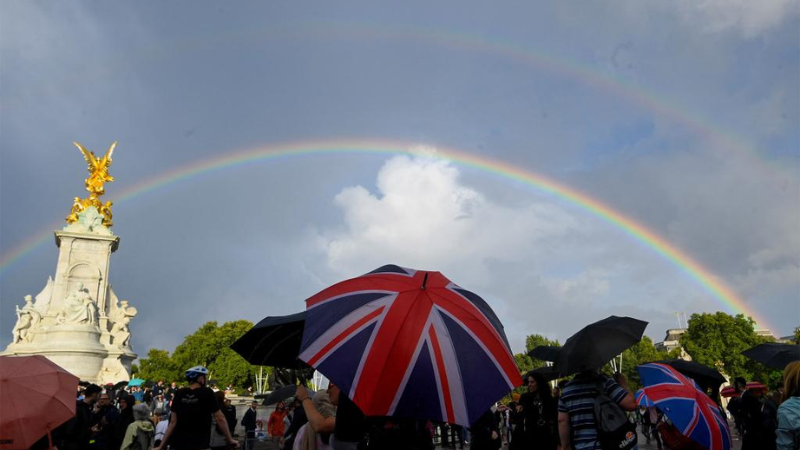 The funeral: Both The Guardian and Politico had already published in advance all the details of the formal protocol that kicked into gear the moment she died. Every moment and move is meticulously laid out in the “London Bridge” plan. The reason for the name: it’s the code phrase used by officials to inform the prime minister—who is told, “London Bridge is down.” In general, here’s what to expect over the next ten days:

If you want more, you can watch this video of the London Bridge plan:

A flurry of title changes: When Charles becomes king, it will also trigger title changes across the royal family. William and Kate will become both Duke and Duchess of Cornwall and the Prince and Princess of Wales. Camilla gets an upgrade from Duchess of Cornwall to Queen Consort. Harry and Meghan’s kids will become Prince Archie and Princess Lilibet.

Say hello to King Charles III: Although the BBC announcement of the Queen’s death immediately referred to him as king, Charles’ actual coronation will likely take months—since it requires detailed planning and great pomp and ceremony. His mother’s coronation took place 16 months after her accession to the throne. But he will be publicly proclaimed as king in a formal ceremony at St James’ Palace pretty soon.

The ‘slimmed down’ monarchy: Charles’ ascendance is likely to bring bad news for a number of royals. He has long been a proponent of a “slimmed down” monarchy—limited to a handful of members. There’s no room here for either Andrew or his kids. Previous media reports suggest that there will be just eight royal members—and Charles may even limit royal titles to William and his children (the ‘heir and spare’, so to speak). So lots of royal family members could soon be looking for a job—since they will no longer be supported on taxpayer dime.

The ‘activist’ king: Where his mother was famously neutral—never expressing her opinion—many worry Charles will break with that royal tradition. He’s been a very “noisy” royal in comparison—speaking his mind on climate change, architecture etc. His biographer predicts:

“For better or for worse—in my final analysis, more often for better than for worse—the prince is a man with a mission, a knight on a quest. His overarching goals—saving his adopted planet and the monarchy—underpin pretty much everything he does and are sometimes at odds with each other. He accepts that he will not be able to campaign from the throne room as he has campaigned from its antechamber, but if he no longer speaks up quite so often, or intervenes quite so vigorously, he’ll have his weekly audiences with the prime minister instead.”

Columnists are already fretting over a “seismic shift in the role of the sovereign” that “has the potential to be constitutionally and politically explosive”.

The bottomline: Elizabeth’s greatest achievement is the fact that she has remained in the public eye her entire life—and yet remained a mystery. Neither television nor the internet could pierce her veil. As The Guardian notes, “Yet despite all the exposure, she remained largely unknown—and unknowable. It was perhaps her most remarkable feat.”

The Guardian has the most colourful profile of Elizabeth—while BBC News has the most details. New York Times looks at her impact on the global stage. Quartz offers a handy timeline. Politico has everything you need to know about the “London Bridge” plan. BBC News has more on the coronation timeline—while The Guardian looks at Camilla’s promotion to Queen Consort. Times UK (paywall) looks ahead to the reign of King Charles III—while this older Insider piece has more on his plans to slim down the monarchy.