ICYMI, we published the very first edition of Advisory this weekend. Check it out! And let us know what you think at talktous@splainer.in. Advisory is a newborn baby and has plenty of room to grow and learn. So suggestions, feedback etc are totally welcome.

‘Dancin’ in your underwear’: That’s the theme of our very first splainer fam-sourced playlist for the ‘Listen’ section of the Advisory. Send us the song that you are most likely to blast on the stereo—while you do a Tom Cruise in the bedroom (remember ‘Risky Business’?) We want to put together a playlist that will inspire all of us to abandon inhibitions and just feel the joy. Share your recommendation here!

Big reminder: Our app isn’t working as it needs a total reboot—which will take a bit over a month. Please don’t use it for now.

One: England beat Senegal 3-0—and will now face France in the quarter finals. And the world learned the name of 19-year-old Jude Bellingham who helped set up two of the goals. New York Times has more on his contribution. The Telegraph has the match report.

ICYMI: On Saturday, the US crashed out of the tournament—losing 3-1 to Netherlands. And Argentina advanced to the quarters after a 2-1 victory over Australia. The Atlantic has a good read on why America couldn’t get it done.

In unhappy football news: Everyone is worried about the health of the great legend, Pelé. A Brazilian newspaper claimed he has been moved into end-of-life care—after deciding to end his colon cancer treatment. But Pelé soon posted a reassuring Instagram message, saying: “My friends, I want to keep everyone calm and positive. I’m strong, with a lot of hope and I follow my treatment as usual.” ESPN reports that he may have first been admitted to hospital due to a Covid infection. (New York Times)

Meanwhile in Qatar: Fans and authorities have been expressing their support clear and loud. For example, see what the Torch Tower—which is wrapped in an LED screen to beam out live scores and clips—looked like. Indian Express has more on the other tributes—which include murals and drone shows. 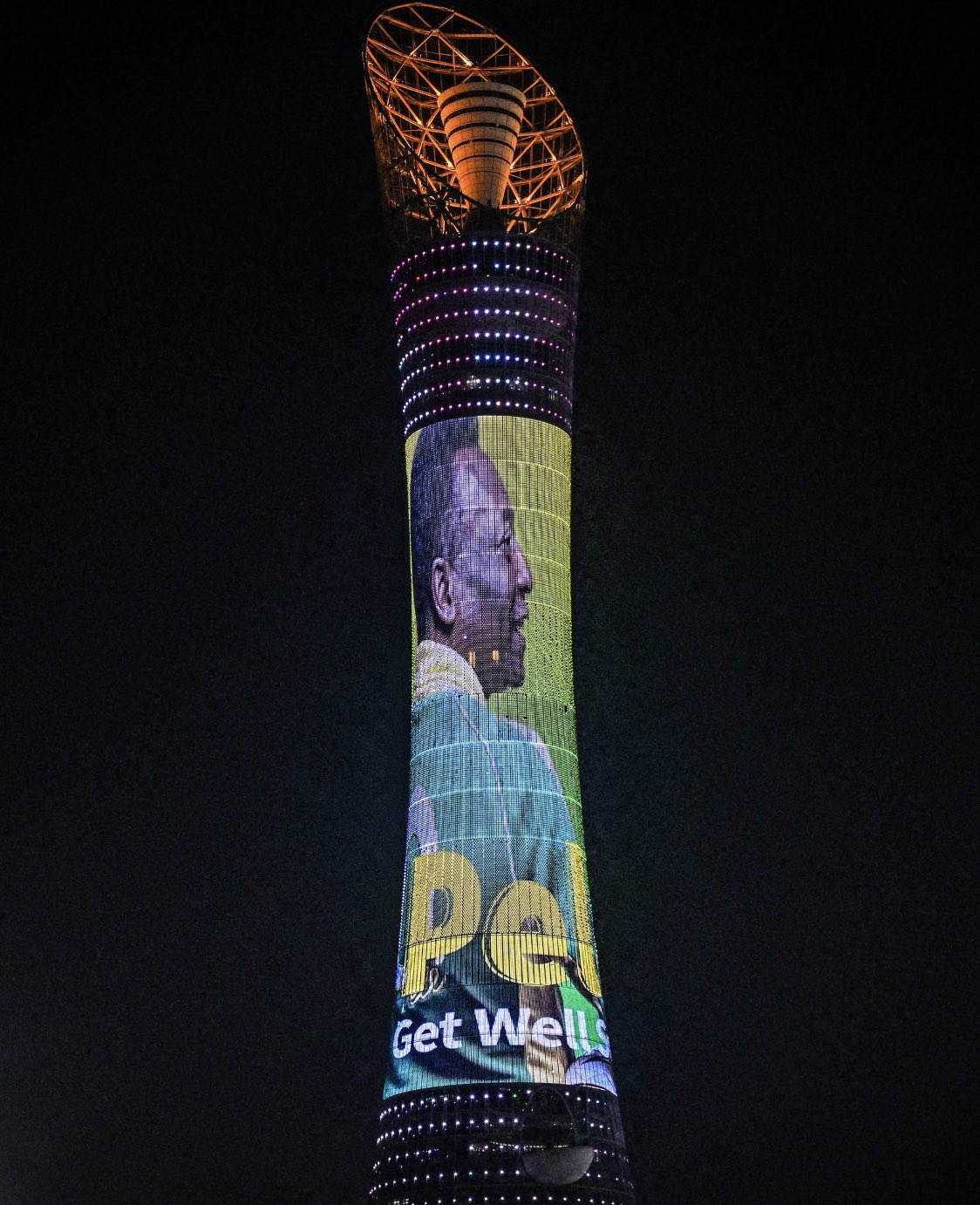 The context: Back in 1984, toxic emissions from a Union Carbide factory killed an estimated 15,000 people and left more than half a million seriously ill in Bhopal. A 2019 UN report found that 30 tonnes of the poisonous gas affected more than 600,000 workers and nearby inhabitants—calling it one of the worst industrial accidents in the post-WWI era. The government inked a deal for a paltry $470 million with Union Carbide in 1989—and has since demanded greater compensation. But the company’s new owner Dow Chemicals has strenuously resisted any effort to reopen the case.

Here’s what’s new: An investigation by The Reporters’ Collective for Al Jazeera accessed the company’s internal records—and found it continued to profit from the Indian market even after the tragedy. Three years after the disaster, it formed a company called Visa Petrochemicals—which then sold its products to state and union governments—including Madhya Pradesh, which was ground zero for the deaths:

To create a discreet backdoor into India where the public saw it as the devil of Bhopal and courts were going after it, UCC and its associates floated three firms, one each in “India, the United States and Singapore. In its internal records, Carbide employees called them “front” and “dummy” companies. At times, they referred to these companies as their “extended arms”. These firms took orders from Indian customers on UCC’s behalf, relabelled its products, routed them through multiple ports and supplied them to customers. The company sold materials that went into the making of household products ranging from telephone cables to paints.

We highly recommend reading the entire investigation over at Al Jazeera.

According to a new Oxfam report, women constitute only one-third of internet users in India. And they are 15% less likely to own a mobile phone and 33% less likely to use mobile internet services than men. India has the widest gender gap—of 40.4%—in the Asia-Pacific region. There is also a significant urban-rural divide—31% to 67%—despite a 13% expansion in internet users. Maharashtra has the highest internet penetration, followed by Goa and Kerala. Indian Express has more details.

The Twitter Files: Elon Musk gave journalist Matt Taibbi—author of the popular substack newsletter TK News—access to hordes of internal files. Taibbi admitted that he had to "agree to certain conditions" to gain that access—but did not disclose what they were. He then posted a nearly 40-tweet thread laying out what he found—as a first instalment.

The context: The thread exposes the internal debate over a New York Post story on the leaked contents of the laptop of Hunter Biden—in the runup to the presidential elections in 2020, when his dad, Joe, was the Democratic nominee. The brouhaha over the laptop and what it revealed is convoluted and US-centric, but you can find a basic explainer here. In any case, Twitter basically shut down any tweets about the laptop—including the New York Post story.

USA Today has a good, balanced summary—and explains why this is mostly a political controversy—and less to do with Twitter’s policies. Washington Post takes a more scathing view—of Musk and Taibbi. Wired offers a big-picture analysis of the challenge of content moderation—which is now Musk’s biggest headache.

Everyone was upset when ‘RRR’ was not picked as the official Indian entry at the Oscars. But neither the movie nor its director are worse for it. SS Rajamouli was named best director by the prestigious New York Film Critics Circle—whose members are top critics from daily and weekly US newspapers, magazines and the web’s most respected online publications. Best movie, however, went to ‘Tar’ and its lead actress Cate Blanchett also took the top honour in her category. Point to remember: NYFCC winners rarely go on to get an Oscar—with only one winner scoring at the Oscars the past 11 years. Then again, ‘RRR’ wasn’t even on the list of predicted winners at this film festival so it may continue to surprise as it makes an Academy run during this award season. (Mint)

Speaking of movies: Three other jury members of the International Film Festival of India (IFFI) have come out in support of Nadav Lapid—who enraged many Indians by saying ‘The Kashmir Files’ “felt to us like a vulgar propaganda movie, inappropriate for an artistic competitive section of such a prestigious film festival.” Lapid was savaged on social media—as was the Israeli ambassador who apologised—while noting the level of anti-semitic hate aimed at him. Jurors Jinko Gotoh, Pascale Chavance and Javier Angulo Barturen have now issued an open letter saying Lapid’s statement reflects their views. The only remaining person on the jury is also the sole Indian—Sudipto Sen—who claimed Mr Lapid made the statement "in his personal capacity.” (NDTV)

Last year, Prince William launched the $1.2 million Earthshot Prize to recognise the most innovative projects that have the greatest potential to save the planet. Among the five winners is Kheyti—a Telangana-based startup that makes it affordable and easy for farmers to grow crops in a ‘Greenhouse-in-a-Box’. Why are greenhouses important? Plants in the greenhouse require 98% less water than those outdoors—and yields are 7X higher. The Kheyti version is 90% cheaper than the standard greenhouse. Business Standard has more details.

As you may know, the Ambanis are building the biggest zoo in the world in Gujarat. And the grandly named Greens Zoological, Rescue and Rehabilitation Kingdom needs lots of residents to fulfil its ambitions. Hence it has been acquiring animals around the world and in India. The latest being 1,000 mugger (or marsh) crocodiles from a breeding centre in Chennai—of which 300 have already been moved. The breeding centre says the shift will be an upgrade for crocs: "Because of overpopulation at the bank, hundreds of crocodile eggs are destroyed every year. The decision to shift the crocodiles was taken to give them a better space to live in." While conservationists are sceptical, a petition to block the move was reviewed and blocked by the High Court—which found the already captive crocodiles will have better amenities at the Ambani joint. (BBC News)

One: Climate change protests are getting more bizarre by the minute. There was the flurry of attacks on famous paintings in museums around the world. New on the list: high-end restaurants with a meat-heavy menu. Animal Rebellion protesters staged a sit-in at Nusr-Et, a restaurant which serves gold-plated steaks—which cost up to $1,787 (£1,450). The reason:

Restaurants like these are symbolic of a broken system. Whilst two million people are relying on food banks in the UK right now, influencer chefs are selling gold-plated steaks for more than £1,000. Steaks, and other red meats, that we know carry the highest environmental impacts.

They were, of course, politely hauled out by the waitstaff. See the clip below. (The Independent)

Two: Not to be left behind, Just Stop Oil activists staged a ‘bed-in’ over at the iconic department store Harrods—to protest sky-rocketing fuel prices in the UK. They tucked themselves into a display worth $34,518 (£28,000) to make that point. (Metro UK) 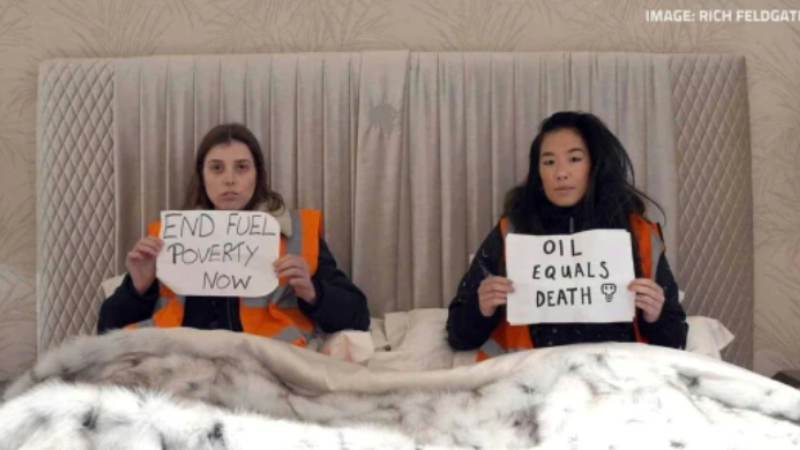 Three: Some smart and greedy folks in Kyiv came up with the bright idea of stealing one of Banksy’s murals—recently painted on the walls of the war-torn city. The eight thieves cut out the piece of the wall, but were soon caught in the act. The mural is intact and now in protective custody. See the before and after photos below. (BBC News) 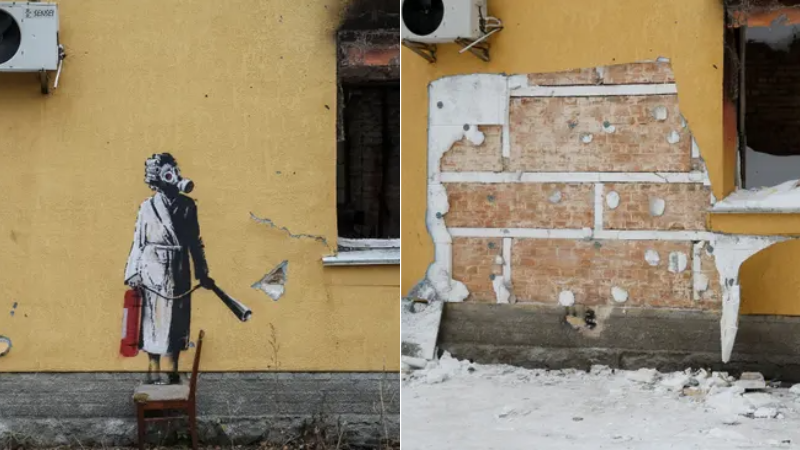 Four: The new trailer for ‘Spider-Man: Across the Spider-Verse’ won’t be out until December 13, but we appreciated this glimpse of Miles Morales and Gwen Stacy hanging upside-down in New York City. FYI: the flick will feature six different animation styles as it treks through various Spider universes—including an Indian one that is already being dubbed as ‘Mumbattan’—based on an Indian comic-book look. You can see a flash of it in the teaser released earlier this year. (Collider) 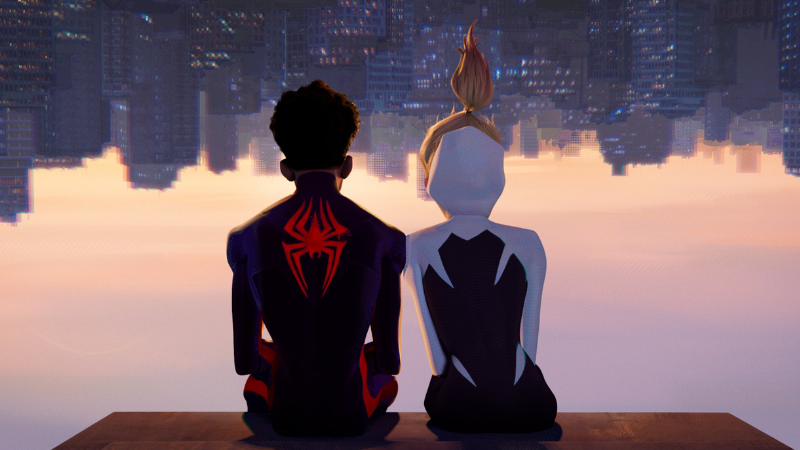