The UK Prime Minister stubbornly insists on holding on to his job—despite the fact that 40 ministers and top government officials have tendered their resignation over the space of 24 hours. In fact, he promptly sacked one of his senior ministers Michael Gove—when he asked Johnson to resign. Sources close to the PM are doubling down for a bitter battle:

“He wants to stay and fight. The choice is a summer of navel-gazing and instability or a new partnership that finally moves forward and tackles the cost of living crisis and grows the economy. It’s not quite as Doomsday as people were thinking a few hours ago.”

The Guardian has more details.

Alt News revealed that its payment gateway Razorpay turned over personal data of its donors to the police. The news organisation is under scrutiny since the arrest of co-founder Mohammed Zubair—and has been accused of receiving foreign donations that violate Indian law (denied by Alt News). The revelation sparked great outrage on Twitter. Razorpay then issued a statement pointing out that it didn’t exactly have the option of saying ‘no’ to a written order from legal authorities under Section 91 CrPC. And it clarified that the company has not shared “details like PAN card number, Aadhaar number, address, and pincode.” Hindu Business Line has more on the firestorm around Razorpay.

Speaking of money: Zimbabwe is planning to sell 22-carat gold coins to citizens to stabilise its falling currency. These coins—called Mosi oa-Tunya or “Smoke that Thunders”—offer security in the midst of galloping inflation—which jumped 192% in June. (Bloomberg News via Yahoo News)

Speaking of arrested journalists: Zee news anchor Rohit Ranjan is now out on bail—after being questioned for 12 hours by the Uttar Pradesh police. The Chhattisgarh police had arrived in Delhi to arrest Ranjan with a non-bailable warrant—for misrepresenting a video featuring Rahul Gandhi. But the UP police got there first—and arrested him on an FIR that oddly had not been written up and did not mention Ranjan by name. In any case, Ranjan is nowhere to be found—and has been declared as “absconding” by the Chhattisgarh police. (The Hindu)

Lakes and rivers around the world are running dry thanks to extended droughts—triggered by climate change. Utah’s Great Salt Lake hit a historic low for the second time this year—dipping to 1,277.1 metres over the weekend. Why this is serious: it threatens a $1.3 billion lake-based economy in Salt Lake City alone—and will put millions of migrating birds in danger. Meanwhile, Lake Mead in Nevada—the largest reservoir in the US—is just one-quarter full.

But it’s not just the US. Italy has declared a state of emergency as it faces the worst water crisis in 70 years. The Po is the longest river in Italy and 17 million people, or one-third of the total population, live in its basin. Many stretches have run dry and the flow is so poor that sea water is seeping inland—destroying crops.

A Gmail revamp is here!

Google has changed the design for the most popular email service in the world. What’s new: an all-blue colour scheme. Also: a new, giant sidebar—with only four icons: one for Gmail, two for Google Chat, and one for Google Meet. Point to note: this is a second sidebar, added to the one you already have—and, as Ars Technica points out, “feels like a big banner ad for Google's other communication apps.” The good news: you can get rid of it. Ars Technica has more details, screenshots and hacks. See Google demo below:

Spicejet is in trouble

On Tuesday, three separate Spicejet planes faced mechanical glitches. A Delhi-Dubai flight was forced to make a safety landing in Karachi because of a fuel indicator malfunction. A Kandla-Mumbai flight made a priority landing in Bombay because its windshield cracked midair—when it was at 23,000 feet! And a Kolkata-Chongqing cargo carrier returned to Kolkata after its weather radar stopped working. The airline has experienced eight such incidents in 18 days. Aviation authorities have now issued a show cause notice, declaring the airline has “failed to establish safe, efficient and reliable air services.” (Quartz)

Justice HP Sandesh of the Karnataka High Court revealed that he was indirectly threatened with transfer for overseeing a corruption case involving the District Magistrate of Bangalore. Sandesh made the shocking allegation public while hearing a bail application for one of the accused. Scroll has more on the case.

Two: The Dalai Lama celebrated his 87th ‘incarnation day’—and cut his birthday cake in the company of Richard Gere. FYI: he is also godfather to Gere’s son, Homer. (Hindustan Times)

Three: Sotheby’s is auctioning a 76 million-year-old skeleton of a dinosaur species named—wait for it!—Gorgosaurus. It measures nearly 10 feet (3 metres) tall and 22 (6.7 metres) feet long. It is expected to sell for between $5 to $8 million. FYI: this is the only Gorgosaurus held in a private collection. (Associated Press) 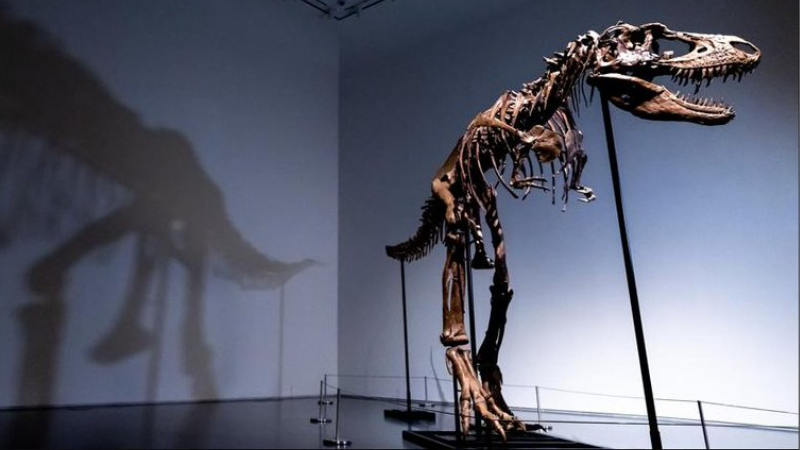