Commonwealth Games: We are golden!

Mirabai Chanu won India’s first gold medal in the women’s 49 kg weightlifting final in Birmingham. She was the favourite—having won the silver at the Tokyo Olympics last year—and since Olympic gold medallist Hou Zhihui from China was not in the mix. Her winning total of 201 kgs—a CWG record—was 29 kgs higher than Marie Ranaivosoa of Mauritius who took the #2 spot. Scroll has more details. Watch Chanu’s mom and other relatives celebrate her win at home:

Also gold medallists: Jeremy Lalrinnunga and Achinta Sheuli. Lalrinnunga came in at #1 in the men’s 67 kg weightlifting competition. His total of 300 kg is also a CWG record—and was 7 kg higher than his nearest rival, Vaipava Ioane of Samoa. The Telegraph has that story. Meanwhile, Sheuli heaved 313 kg in the men’s 73 kg category to score the gold—beating Malaysia's Erry Hidayat Muhammad—and set a new CWG record.

Also worth watching: This lovely moment of sportsmanship. Malaysian badminton coach Hendrawan lent his shoes to Jamaican national champion Samuel Ricketts—who damaged his shoes during a match between the two countries in the mixed category.  Plus: Don’t miss sprinter Dutee Chand waving the LGBTQ+ flag at the opening ceremony. She is India’s only openly queer athlete.

Meanwhile, in London: The English women's team beat eight-time European champions Germany 2-1 in extra time—in a glorious, closely fought game. The victory was especially sweet for England after years of anguish over the men’s team:

“For those of us used to witnessing the years of hurt following England men's team, five European Championships and five World Cups in this particular case—a journey that has taken in Japan, Portugal, Germany, South Africa, Poland and Ukraine, Brazil, France, Russia and last summer's Euro 2020—the misery was ended by the Lionesses on their own doorstep at Wembley.”

BBC News explains why this is a huge moment for English football. Watch Chloe Kelly go batshit happy after scoring the winning goal—yes, she got a yellow card for it:

The Enforcement Directorate can’t stop raiding opposition leaders across the country. Shiv Sena’s most outspoken leader Sanjay Raut is the latest to receive a special home visit—and has since been arrested. He is accused of money laundering “linked to alleged irregularities in the redevelopment of a Mumbai ‘chawl’.” Indian Express has more on the allegations against Raut. Also this: three Congress MLAs from Jharkhand have been arrested with bags of money in Bengal. The party claims it's a conspiracy to overthrow the state’s ruling coalition.

Meanwhile, in Bengal: Trinamool minister Partha Chatterjee insists that the mother lode of illicit money recovered during ED raids does not belong to him. FYI: he has already lost his job and been exiled from the party.  More shamefully, ANI news service actually tweeted out this about his assistant: “WB SSC scam: Were sex toys recovered from Arpita Mukherjee's residence? Social media abuzz over reports.” No, we’re not linking to either the tweet or the story.

According to a Times UK exclusive, he accepted a £1 million payment from the family of Osama bin Laden back in 2013. Specifically, the generous donor was Bakr bin Laden, Osama’s half-brother. The money went to two of his foundations—despite the objections raised by his advisers:

“The fact that a member of the highest level of the British establishment was choosing to broker deals with a name and a family that not only rang alarm bells, but abject horror around the world…why would you do this? What good reason is there to do this?”

But Charles “shouted down” the naysayers because he “felt it would be too embarrassing to hand the money back to the brothers and feared that they would suspect the reason.” Prince Charles’ PR folks have, of course, denied it all. What’s really embarrassing: this is a month after media reports revealed that Charles accepted a suitcase containing €1 million in cash from the former prime minister of Qatar. (Times UK, paywall, BBC News)

New York City became the second city in the US to declare monkeypox as a public health emergency. The city now has 150,000 residents who may be at risk of infection—but only has 1,345 reported cases as of Friday. The first city to declare an emergency: San Francisco on July 28. (CNN)

Mark Zuckerberg tried to turn the platform into another TikTok, which resulted in a massive backlash. More worryingly, even Insta’s biggest VIPs—i.e the Kardashians—were upset. The result: The company has rolled back a bunch of new features including the full-screen display for photos/videos plus the level of recommended content. Worrying point to note: “However, the walkback on the full-screen feed and recommendations won't be permanent”—since Meta thinks it's only a matter of improving its ranking and recommendation algorithms—which, btw, have sucked forever across all its platforms. (Engadget)

Speaking of tech companies: Indonesia has blocked access to a range of online services, including Steam, Epic Games, PayPal, and Yahoo. The reason: they failed to comply to a new set of stringent content laws:

“[T]he laws give the Indonesian government the ability to obtain data about specific users, as well as coerce companies into removing content that ‘disturbs public order’ or is considered illegal. Platforms have four hours to take action on ‘urgent’ removal requests, or 24 hours in the case of any other content.”

Lunar living: Researchers have found that parts of the moon are positively balmy and may be suitable for living. Some pits and caves are roughly 17°C—even while its surface yo-yos wildly from as high as 126°C during the day to 137°C below zero during the night. The shadowed areas of the pits also offer natural protection from solar radiation, cosmic rays, and micrometeorites. But NASA is in no hurry to set up camp since all the other problems remain unresolved i.e. food and oxygen. (NPR)

Women & maths: A new study shows that women are way better at stats than they think. And they score way higher despite having a negative attitude towards their abilities:

The Conversation has more details.

One: Will Smith apologises again! This time he posted a near 6-minute apology aimed directly at Chris Rock—who he smacked at the Oscars in March. If you don’t remember what happened, our Big Story has all the details. Also: der aaye, durust aaye (as in, better late than never)? (Associated Press)

Two: Here’s how not to promote body positivity. The Women’s Institute in Spain put out a campaign just in time for summer at the beach—and messed things up twice. First, it didn’t ask the permission of British model Nyome Nicholas Williams to use her image. Then—even worse—it replaced the prosthetic limb of another model, Sian Green-Lord, with a ‘real’ leg. That’s the one lying down in the white floral swimsuit. She said: “I’m literally shaking, I’m so angry.” Damn right! (The Guardian) 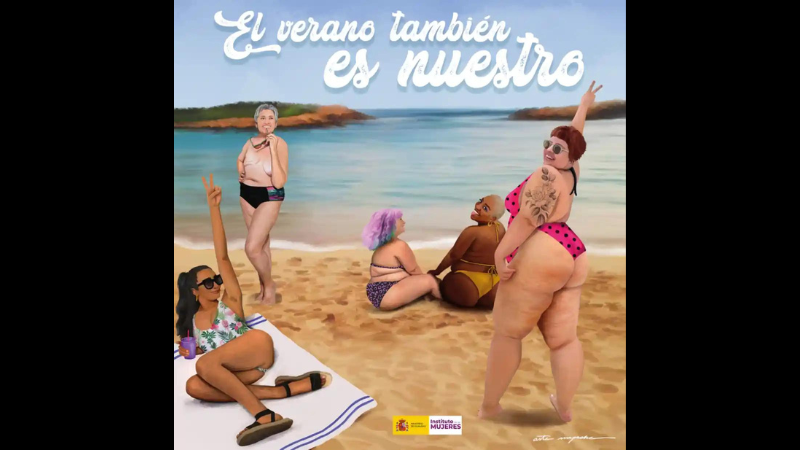 Three: This tiny turtle was rescued from an Australian beach when one of his flippers appeared to be “chomped off.” But here’s what was truly notable about him: "he defecated six days of plastic. No feces came out, just pure plastic." (Business Insider)