Prime Minister Liz Truss has lost yet another key cabinet minister—just a week after she fired her Chancellor of the Exchequer Kwasi Kwarteng. This time, Home Secretary Suella Braverman resigned after sharing confidential information on her private email—which is a breach of ministerial rules. More notably, she took the opportunity to kick Truss in her shins in the resignation letter, writing “I have concerns about the direction of this government”—and accused her of abandoning “key pledges”.

Wait, it gets worse. The Parliament dissolved into scenes of chaos because Tory party whips turned a Labour party-introduced vote to ban fracking into a vote of confidence in the government. Translation: vote against the party line, you will be expelled. So when the vote came around, dissenting Tory MPs were “manhandled” and “bullied” in the lobby. There were heated rumours of the Chief Whip resigning—but apparently she is still around…for now. But Liz Truss may not last as long. According to the Wall Street Journal, most of her party colleagues are ready to show her the door—but can’t agree on a replacement. (CNN)

Mallikarjun Kharge handily beat his rival Shashi Tharoor by winning 7,897 out of the 9,385 votes in the election for party president. Tharoor only secured 1,072—a 12% vote share that shows a significant slice of the party is willing to buck the Gandhi family in favour of change. This is especially impressive since the A-list group of G-23 rebels (explained here) did not support him. As Indian Express points out:

“The G-23 may find it difficult to defend leaving Tharoor to fend for himself now, and the jury is out on what would have been the outcome had they thrown their weight behind Tharoor. No one can claim credit for the votes that Tharoor received, except the MP himself.”

FYI: Tharoor managed to get far more votes than heavyweight Sharad Pawar when the latter contested against Sitaram Kesri in 1997. And in 2000—when Jitendra Prasada faced off with Sonia Gandhi—he managed a paltry 94. Indian Express explains why this is a ‘win’ for Tharoor. The Hindu has Tharoor’s response to his defeat. The Telegraph has more on what we can expect from Kharge. Also read: our Big Story on why this election matters.

President Putin has declared martial law in the provinces of Kherson, Zaporizhzhia, Luhansk and Donetsk—the four regions that held sham referendums to become part of Russia. Apart from allowing Moscow to crush all dissent in these regions, the move also offers this added benefit:

“The president also ordered the creation of territorial defense forces, a type of civilian militia, in the four annexed regions, raising the possibility that Moscow’s forces may try to conscript Ukrainians to fight their own country’s forces, part of a broader effort to mobilize hundreds of thousands of new fighters as its forces suffer huge casualties.”

Meanwhile, thousands of civilians are being moved out by Russian troops from the city of Kherson—a sign of its weakening grip. (New York Times)

“Inside Ola Electric, employees said the culture has turned hostile over the last couple of years. In meetings, Aggarwal ripped up presentations because of a missing page number, directed Punjabi epithets at staff and called teams ‘useless,’ according to current and former employees. Executives said in interviews that meetings scheduled for an hour often lasted 10 minutes because Aggarwal would lose patience over a superfluous sentence in a memo, a crooked paper clip or the quality of printing paper.”

As a result, the company has a big problem with employee retention—and at least one top-ranking executive decided not to join Ola Electric days after formally accepting an employment offer. Bloomberg News has lots more details.

Sleep deprivation: A UK study once again confirms that we need to get a decent night’s sleep—especially as we enter middle age. It found that 50-somethings who sleep less than five hours a night are 30% more likely to develop chronic diseases. That risk jumps to 40% by the time we reach our 70s. (CNN)

Mosquito magnets: Yes, there is a very good reason why machhars prefer biting you over all others in a room. It’s all about the way you smell. A new study found that some people are just ‘mosquito magnets’—and here’s why:

“Mosquito magnets had high levels of certain acids on their skin. These ‘greasy molecules’ are part of the skin’s natural moisturising layer, and people produce them in different amounts.. The healthy bacteria that live on the skin eat up these acids and produce part of our skin’s odour profile.”

Nope, there’s absolutely nothing you can do about it—as you can’t get rid of these acids without damaging your skin. (Associated Press)

Pandemic peril: New data shows that melting glaciers—due to climate change—vastly increase the risk of “viral spillover—where a virus infects a new host for the first time.” The reason: as ice melts, viruses and bacteria locked up in glaciers and permafrost can reawaken and infect local wildlife—and eventually humans. While the crossover to humans is not inevitable, the heightened risk is still a worry. The Guardian explains why.

The elite Delhi University college has been fighting a fierce legal battle to retain the personal interview as part of its admissions process. It had been ordered by DU authorities to scrap the requirement—and use Common University Entrance Test (CUET) scores as the sole criterion to admit non-minority students. The college wants to give 15% weightage to performance in interviews. Yesterday, the Supreme Court refused to stay a Delhi High Court order that directed St Stephen’s to toe the DU line. The Telegraph has more on the ruling.

Yet another New Zealand bird controversy

The country’s wildly popular Bird of the Year competition inevitably ends up making global headlines—though not always for the right reasons. Now, organisers are being threatened with a lawsuit by a bird lover who is furious that they have excluded a songbird named huia. Except the huia has been extinct for over 100 years.

This is an odd demand since the contest is aimed at raising awareness of birds that are endangered—and could potentially be saved. And yet the would-be litigant is vowing a class action suit “on behalf of all the extinct birds of New Zealand, which will allege discrimination on the basis of conservation status.” Well, at least these bird contests are never dull. Also: It is truly sad that we no longer have the very pretty huia. (The Guardian)

One: Iranian climber Elnaz Rekabi—who did not wear a hijab in a competition in Seoul—returned to her home country on Wednesday to a hero’s welcome. She broke the strict government law that requires women to wear a headscarf even when competing abroad—which she called an “accident.” There are worries as to whether she will be detained on her arrival in Tehran. (CNN)

Two: A Japanese man accidentally rammed his car into the country’s oldest toilet—by hitting the accelerator without realising the car was in reverse. FYI: the priceless loo—which is located inside the Tofukuji temple in Kyoto—dates back to the 15th century. Mercifully, most of the structure is intact except for its 700-year-old wooden door and pillars—which hopefully can be repaired. (BBC News) 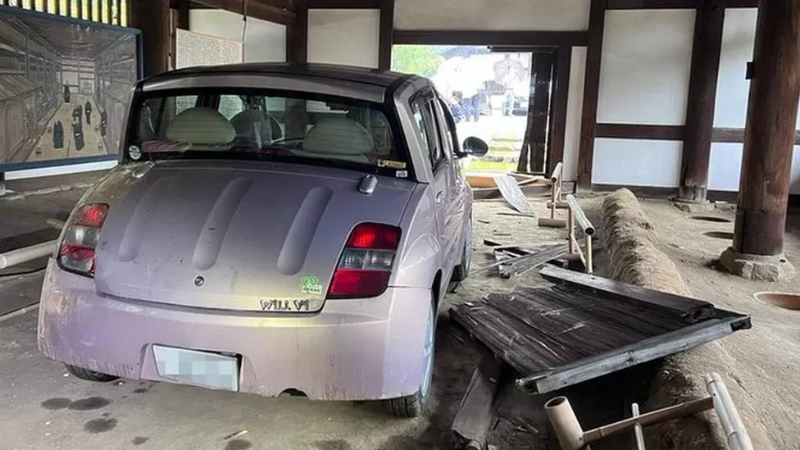