A terrible murder in California

Four members of a Sikh family including an eight-month-old baby were found dead in a field in California—two days after they were abducted outside their trucking business. The kidnapping was captured on CCTV. The suspect is a 48-year-old—Jesus Manuel Salgado—who has previously served time for armed robbery. In that case, the victim was his employer. There is no information on motive in this case—and the police chief said: “There are no words right now to describe the anger I feel and the senselessness of this incident.” The Print and New York Times have more details. Indian Express spoke to the victims’ family back in Punjab.

Meanwhile, in Thailand: School shootings are spreading like a virus around the world. A former police officer opened fire at a preschool—killing 38 people—most of them children between the ages of two and four. His child studied at the school. After the carnage, he returned home, killed his own wife and kids—and finally himself.  BBC News and The Guardian have more on this heartbreaking tragedy.

French author Annie Ernaux was announced as the winner of the prize for literature—setting rest to rumours that Salman Rushdie would get the honour this year. Ernaux is best known for her intensely personal novels—many of which are autobiographical. For example, her memoir ‘Happening’ recalls an illegal abortion she underwent in the 1960s—while ‘Getting Lost’ details her affair with a younger, married man. Here’s how the Swedish Academy describes her writing: "Her work is uncompromising and written in plain language, scraped clean." Washington Post and CNN have more on Ernaux.

Purely for amusement value: We’d like you to know that Baba Ramdev is outraged that he has not been given a Nobel for his contribution to modern science. He declared: "If I would have been a fair-skinned person, the Nobel Prize would have been awarded to me till now for my work in the field of yoga. But, it has been denied to me because I am black." (New Indian Express)

Round and round we go again. Earlier this week, Elon Musk did a big U-turn and agreed to buy the company at the original agreed price of $54.20 per share. Many viewed it as an acknowledgement that he may lose the lawsuit filed by Twitter—forcing him to honour the deal. But then things got murky almost immediately.

The judge in the Delaware case declared that the trial will go ahead—as neither side has asked for a stay on proceedings. Twitter was unwilling to stop legal proceedings as a precondition of the deal, since it served as a handy stick, as one expert explains. But the trial has now been suspended on Musk’s request. He wants more time to get the money to pay for his purchase. The two sides have until October 28 to close the deal. Stay tuned to the next episode of this soap opera. (Associated Press via The Hindu)

A video clip showed at least four men tied to a pole—and brutally flogged by a group of plain-clothed cops. The Indian Express says that the police are investigating the incident—and the policemen involved—but no action has been taken as yet. The men were accused of pelting stones at a local garba celebration.

They are all Muslim—as is clear from the reporting in Al Jazeera. But the Express does not name their religious identity—perhaps because the state government and police are wary about making it a communal issue: “Minister of State for Home Harsh Sanghavi had said that it was ‘some anti-social gang from the village’ and ‘not any community’ that tried to disrupt peace in the village.” Indian Express has more on the incident, while Al Jazeera focuses on the reaction.

A new political bloc in Europe

Leaders of 44 countries—stretching from Iceland all the way to Turkey—met at the first summit of the European Political Community. The brainchild of French President Emmanuel Macron, the EPC aims to rally together a broader European coalition against Russia and its ally Belarus. Its purpose, however, remains vague—and it is unclear what it is meant to achieve. France 24 has more.

The right time to eat every day

New research confirms that grabbing a late dinner is not a good idea if you’re trying to lose weight. The study found that you are more likely to feel hungry if you eat later in the day. And eating just four hours later can make a significant difference to “our hunger levels, the way we burn calories after we eat, and the way we store fat.” And here’s why: “Levels of leptin, a hormone which tells us when we feel full, were decreased for late eaters versus early eaters. In comparison, levels of the hormone ghrelin, which spikes our appetite, rose.” Point to note: the results don’t show a direct link to weight gain—and some experts wonder if they actually reflect the effects of skipping breakfast rather than a late dinner. (CNN)

Angelina Jolie and Brad Pitt are mired in a legal battle over a French winery—Château Miraval—jointly owned by the former couple. Pitt is suing his ex-wife for attempting to sell it without his consent. In the latest filing, however, Jolie has revealed new details of an alleged violent incident aboard a private jet back in 2016—which triggered their separation.

She claims “‘Pitt grabbed Jolie by the head and shook her, and then grabbed her shoulders and shook her again before pushing her into the bathroom wall” and “choked one of the children and struck another in the face.” Pitt’s lawyers say it’s just a story that she invented—and which keeps changing with each passing year.  The Cut has more on the case. BBC News has extended quotes from the filing.

In happier Hollywood news: Scooby-Doo fans will be glad to know that Velma has finally come out of the closet in the latest movie, ‘Trick or Treat Scooby-Doo!’. The clip below shows her getting all googly-eyed and speechless over a costume designer. The acknowledgement is way overdue given that the show’s producers had already disclosed her sexual preference on social media—but were never allowed to show it on-screen. (Variety)

Sidecar came in #26 in the annual list of World’s 50 Best Bars—and is the only Indian entry. At #1: Paradiso in Barcelona—which is the first bar outside London or New York to grab the top spot. It offers all sorts of odd cocktails such as smoked milk punch made with bourbon and tahini. Tayer & Elementary in London came in second—followed by a string of NYC establishments. Bloomberg News via Indian Express has the full list.

One: A new NASA simulation shows how the moon was likely formed—just within the span of a couple of hours—some billions of years ago. The latest, most persuasive theory: Earth was hit by an object the size of Mars—when a part of the planet splintered, creating the moon. (NASA)

Two: Newly published research confirms that a pod of orcas hunted down and killed a great white shark—one of the largest predators in the ocean. This incident—which occured back in May—was captured on video and shows incredible teamwork among the killer whales. (ScienceAlert)

Three: Dubai now has a new Hindu temple—which was inaugurated on Dassehra.

It is open to people of all faiths and is believed to be the first “community-driven” temple in the UAE. It is situated in the Jebel Ali’s ‘Worship Village’, which also has a gurdwara and several churches. (Indian Express) 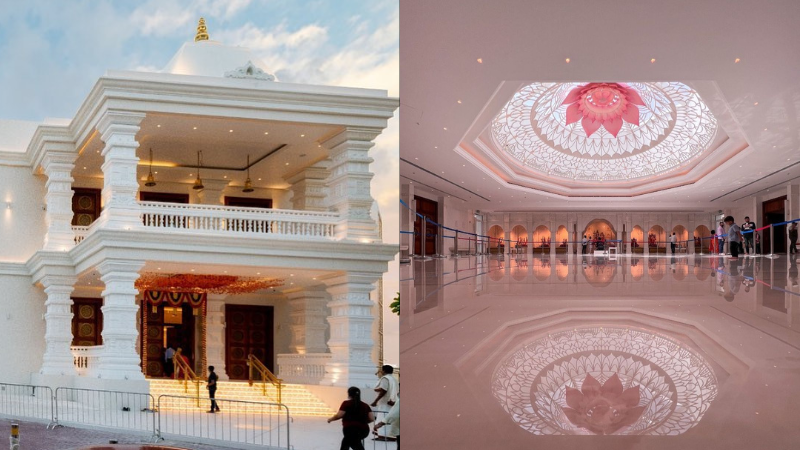 Four: This Navratri, passengers getting ready to board their flight were treated to the sight of folks—including airline and airport staff—doing the garba. The video below is from Mumbai, and this clip was taken in Bangalore airport—whose staff received some flak for going all Gujarati instead of showcasing Kannadiga culture. Seems a minor crime given that nine people have been booked in the same state for breaking into a madrassa and performing puja—during a Dassehra procession.