Putin readies for a big attack

For the first time since World War II, Russia mobilised its reserve troops to put the country on a wartime footing. Around 300,000 reservists will be called into service—but there will not be  a full-blown military draft. President Putin also issued a veiled nuclear threat to the West, warning: “If the territorial integrity of our country is threatened, we will without doubt use all available means to protect Russia and our people—this is not a bluff.” The mobilisation announcement immediately sparked protests—and flights out of Russia skyrocketed in price and sold out. (CNBC)

The state’s top-ranking prosecutor has sued the former president, three of his children and the Trump Organization—accusing them of financial fraud: "The statements of financial condition were greatly exaggerated, grossly inflated, objectively false, and therefore fraudulent and illegal.” Basically, they lied repeatedly—up to 200 times—about the value of their financial assets.

Now, Trump is facing all sorts of investigations—be it into his role in the Capitol Hill riots or illegally hoarding top-secret documents. Why this one matters more to Trump:

“It's like a nuclear bomb exploded. The man has a fragile ego, which we all know. His entire life is predicated on his net worth and him portraying himself as this wonderful businessman, this massive success, this incredibly wealthy guy. And what do we know? We know that it's not true."

According to the IIFL Wealth Hurun India Rich List, Gautam Adani made Rs 16 billion (1,600 crore) per day over the last year—to become the second richest person in the world. Also, we now have 96 more Indians who are worth Rs 1,000 crore—taking the total to 1,103. The youngest on the list: nineteen-year-old Kaivalya Vohra who founded Zepto. India now has 221 billionaires. (Times of India)

Also sweet news for Adani: He just inked a $3.1 billion deal to build a port in West Bengal. Bloomberg News has that story.

The historic heat waves that scorched the land in the US and Europe may be abating. But large swathes of North Atlantic and northern Pacific oceans are still in the midst of a record marine heat wave—which has lasted three months. Parts of both oceans are 4°C warmer than usual—temperatures that are "unprecedented" for this part of the world. Axios has more on why this heatwave poses a serious threat to marine animals.

Honey is best: New UK research looked at 250 studies dating back to 1937—and concluded that honey is as powerful as modern antibiotics in healing wounds:

“It contains an enzyme which breaks down sugars and generates hydrogen peroxide, a type of bleach, which kills bacteria. Some types, including manuka honey, contain extra active compounds that kill bugs. Honey’s stickiness also helps wounds to heal as it provides an effective barrier between the site and the external environment to prevent infection.”

In fact, honey can kill certain drug-resistant superbugs like MRSA when used in tandem with other medicines. (Times UK, paywall)

Meds for alcoholism: US researchers found that a common medicine used to treat heart disease and blood pressure—called Spironolactone—is very effective in reducing people’s craving for, and consumption of, alcohol. But more research is required before it can be prescribed as a treatment. Why this matters:

“There are three approved medications for alcohol use disorder. Only two of these drugs, naltrexone and acamprosate, are considered effective front-line treatments (the third drug, disulfiram, causes symptoms like nausea when a person tries to drink and is usually only recommended as a last resort).”

Bad dreams and dementia: A new Lancet study shows that people who experience frequent nightmares in their middle age are more likely to develop dementia in their later life:

“The research shows that people aged 35-64 who experience bad dreams on a weekly basis are four times more likely to experience cognitive decline over the following decade, while older people were twice as likely to be diagnosed with dementia.”

The link is stronger among men than women. The Conversation has more details.

Museum visits: One of Brussel’s biggest hospitals will soon prescribe free museum visits to its patients suffering from anxiety, stress and depression. The therapies will include touring ancient underground pathways in the Sewer Museum and checking out 16th century textiles at the Fashion and Lace Museum. Point to note: this isn’t for those who are suffering severe illnesses—and will be used in tandem with conventional forms of therapy. (Smithsonian Magazine)

Supreme Court hearings will be streamed

Chief Justice Umesh Lalit has ordered all cases involving key constitutional issues to be live streamed on YouTube. This is in line with a 2018 judgement—which declared live telecast of court proceedings as essential to a citizen’s fundamental right to access justice. (Hindustan Times)

In May, the Champions League final between Real Madrid and Liverpool in Paris was a total mess. Liverpool fans were trapped outside the stadium—and the riot police used tear gas and pepper spray on the outraged crowds. At the time, the Union of European Football Associations (UEFA)—the apex football body in Europe—blamed Liverpool fans—who were accused of arriving late, and trying to enter on fake tickets.

Now, here’s the twist: The Guardian has now discovered that the UEFA statement was prepared a “considerable time” before the final game. In other words, if the game got delayed, they were already ready to blame it on those English ‘football hooligans’. You can read more on that here—and check out this immersive recreation of the chaos on game day.

One: This is really sad to see. These are among the 230 pilot whales found beached on a Tasmanian beach Wednesday—for reasons no one can explain. A local boat skipper said, “Because of the waves, they just keep being washed further and further up the beach… At least 95% will die, because the ocean’s just so fierce.” This is just days after 14 sperm whales died in similar circumstances roughly 170 miles away. Also: this is the exact same time and location of a terrible beaching event in 2020 that involved 470 pilot whales. (New York Times) 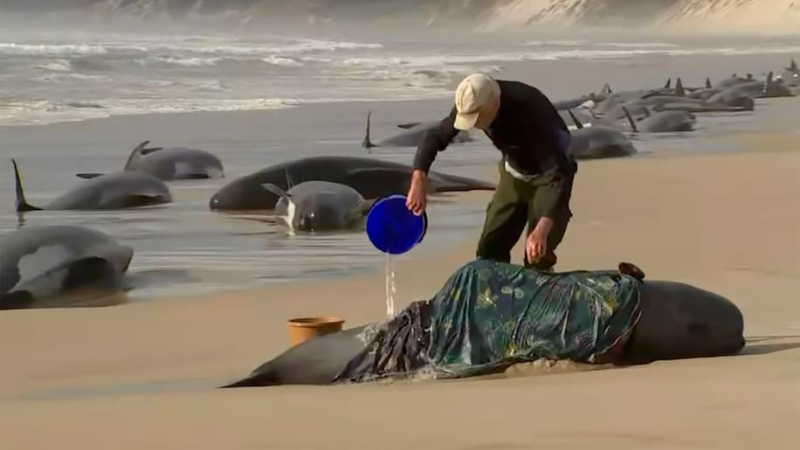 Two: If you need a new reason to admire New Zealand prime minister Jacinda Arden: A creepy-crawly waltzed onto her shoulder—and nearly got tangled in her hair!—during a press conference at the UN’s General Assembly summit. She just casually brushed it off. Look at the size of that thing! (The Guardian)

Three: Also surprising us with his bravado: actor Tom Hardy—who quietly entered a jiu jitsu tournament in England under his real name, Edward Hardy… and won all his matches! Apparently, Hardy was a “really nice guy” and one of his opponents said “he’s probably the toughest competitor I’ve had.” Well done, Tom! Watch him in action below. (Hollywood Reporter)

Four: TikTok challenges are infamous for being both absurd and dangerous to human life. The latest #sleepychicken challenge involves cooking chicken in Nyquil, and eating it—and is wildly popular. The US health authorities were forced to issue a warning to all the idiots attempting to prove their TikTok cred:

“Boiling a medication can make it much more concentrated and change its properties in other ways. Even if you don’t eat the chicken, inhaling the medication’s vapours while cooking could cause high levels of the drugs to enter your body. It could also hurt your lungs.”

Check out the video below to get a taste of the insanity. (USA Today)