An important announcement: On Friday, I have to undergo an important surgery—which will likely take at least a week of recovery. But I am leaving you in the safe hands of two excellent journalists and very kind friends. Samarth Bansal will be writing the lead in my absence while Piyasree Dasgupta will be editing the edition. And, of course, the amazing splainer team—Rachel, Sara, Nirmal, Aarthi and Vagda—will be holding the fort in my absence. I plan to be back in the saddle around January 30. Try not to miss me too much:)

The New Zealand prime minister announced that she doesn’t have the energy to seek reelection. She will step down before the upcoming national elections in October—and the new PM will be sworn in on February 7. At a news conference, she said:

Nearing the end of the year I thought I really need to give myself the summer to really consider whether or not I have what it takes to continue. Once I realized that I didn’t, I knew unfortunately there wasn’t much alternative other than to hand over now.

The Annual Status of Education Report—released by the NGO Pratham—shows that more children than ever enrolled in government schools. The percentage rose from 65.6% in 2018 to 72.9% in 2022. The overall enrollment figures also increased by about 1%. But the children’s reading skills have taken a huge hit:

Many educators are blaming the drop on the rising use of screens—especially the phone. The numbers for basic arithmetic levels also varied across the country—dropping sharply in states like Tamil Nadu—while improving modestly in Uttar Pradesh. The Hindu and Telegraph have lots more details.

Two of India’s most decorated female wrestlers—Vinesh Phogat and Sakshi Malik—accused Wrestling Federation of India (WFI) President Brij Bhushan Sharan Singh of sexual harassment. They have pointed the finger at coaches, as well:

This exploitation is happening every day. Why does the camp happen in Lucknow? We have written to the PM and the Sports Minister… The reason it’s happening over there is because he [Singh] has a house there and so it’s easy to exploit the girls. They trouble us too much. They get into our personal lives and relationships. They want to know everything.

Singh is a BJP MP from Uttar Pradesh—and has denied all allegations. The women wrestlers say they will continue their dharna at Jantar Mantar until the Prime Minister or Home Minister promises an investigation. (Indian Express)

A shameful report on Myanmar

A report released by the Special Advisory Council for Myanmar—an independent group of international experts—reveals that companies from 13 countries are helping the Myanmar military regime manufacture weapons—which are then used to terrorise its own citizens. India is on the list—along with France, Germany, China and the US. They supply software, raw materials and machines used to make their own versions of sniper rifles, MA-1 semi-automatic rifles and Uzi sub-machine guns. The official number of people killed since the coup in 2021 is 2,600—but the real tally is likely 10X that number. (Times UK, paywall, Al Jazeera)

Also being terrorised: Journalists. According to a UNESCO report, 86 journalists and media employees around the world were killed in the year 2022—an increase from 55 in 2021. The country at the top of the list: Mexico with 19 deaths. What’s notable: only half of them were killed while on duty. The rest were attacked at home, in public places or while travelling. The moral of this story: “There are no safe spaces for journalists, even in their spare time.” (The Wire)

IT job numbers are dire

Four top software companies—Tata Consultancy Services, Infosys, HCL Tech and Wipro—hired just 1,940 employees in the third quarter of FY23. That’s a nearly 94% drop from the previous quarter. While companies insist there is no slowdown in hiring, most experts estimate the trend will deepen in the coming months driven by “geopolitical scenarios, impending recession and cost conservation by companies.” They also expect these tech giants to cut their talent costs with aggressive on-campus hiring. (Economic Times)

Speaking of job cuts: Microsoft made its layoffs official. It is cutting 10,000 jobs—a little less than 5% of its workforce. (CNN)

Doing much better: Cryptocurrencies, specifically bitcoin. The token was up 28% this month—which is the first sign of hope after months of bad news—including bankruptcies and fraud. On Saturday, bitcoin’s price rose above $21,000 per coin for the first time since November. CNBC explains this sudden spike.

In recent months, Indian startups have been in the headlines for all the wrong reasons—and there have been serious questions about their book-keeping (see: Ashneer Grover). The latest debacle involves GoMechanic which fudged its revenue numbers—and now has to sack 70% of its staff to “restructure” the business. This is nearly two years after the auto-repair platform raised a whopping $42 million in funding—from the likes of Sequoia Capital and Tiger Global. The cherry on top of this sorry pie: the self-serving statement put out by founder Amit Bhasin on LinkedIn. (The Hindu)

US college rankings are in trouble

Since the 80s, the US News & World Report has put out the definitive rankings of US schools each year. But the country’s most prestigious institutions are refusing to participate in the competition for the top spot. Harvard Medical School is the latest to withdraw—a move inspired by the en masse exit of law schools last year. The reason offered by the dean:

Dr. Daley said that while not intentional, rankings can lead schools to falsify data, centre policies around rankings “rather than nobler objectives,” and divert financial aid from students with need to those with the highest test scores… “Ultimately, the suitability of any particular medical school for any given student is too complex, nuanced, and individualised to be served by a rigid ranked list, no matter the methodology,” Dr. Daley said.

Is ChatGPT coming for your job?

A business owner Neil Taylor tried an experiment with the AI tool that is making waves for its language skills. He secretly sent a job application to his own communications company—which had asked applicants to explain the secret of good writing in 300 words. ChatGPT’s response was so impressive that it was rated in the top 20% of the applicants. So would Taylor hire ChatGPT?

It's dramatising the gap between something that's really good and something just pretty good. Lots of people can produce pretty good — and so can ChatGPT. So any writers that are making a living writing dull stuff, they are going to be out of a job.

In other AI news: Microsoft is launching a new app development service this week called the Azure OpenAI which will allow users to integrate AI tools like DALL-E into their own cloud apps. Yes, ChatGPT will soon be part of it too. The Verge has more details.

Rafael Nadal flames out in Australia

Rafa lost his second round match to US player Mackenzie McDonald in straight sets. The reason for this unusually poor performance: a bad hip. It had been bothering him for a couple of days, but seems to have aggravated the injury in the middle of the second set. Nadal later said:

Sometimes you feel super tired about all this stuff in terms of injuries. I just can't say that I am not destroyed mentally at this time, because I will be lying.

Below is a clip of Nadal being cheered by the spectators as he left the court. (Reuters)

One: High end designers have discovered the beauty of the monkey cap—greatly beloved by Bengali uncles. But the price tag on this Dolce and Gabbana creation is a whopping Rs 31,990. FYI, the ‘Khaki ski mask cap’ has sold out. What’s that they say about fools and money… 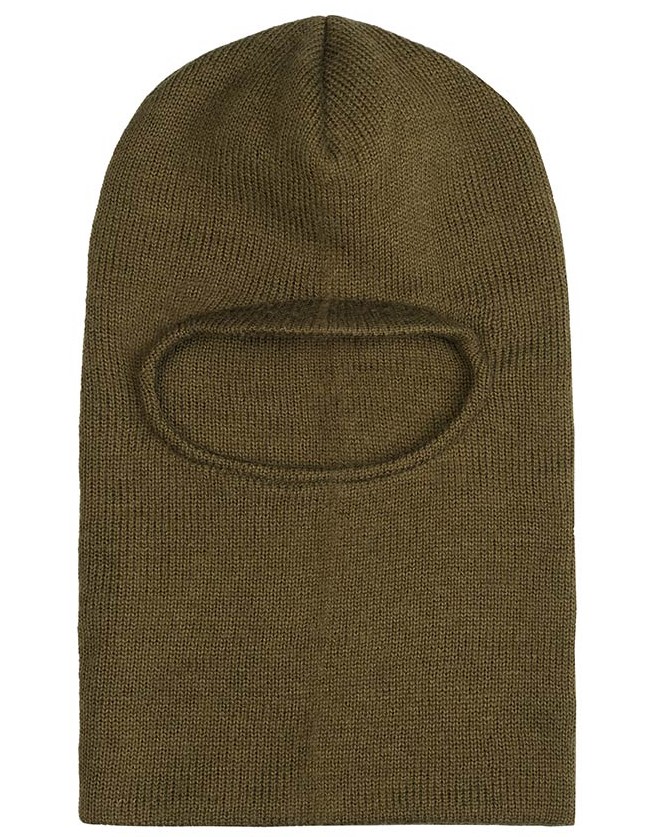 Two: The shooting for the third season of the popular television series ‘Only Murders in the Building’ has started. And the stars shared this cute TikTok video to reveal the new cast members: Paul Rudd and Meryl Streep! (People)

Three: Climate change icon Greta Thunberg was briefly detained for protesting the demolition of a village—to make way for the construction of a coal mine in Germany. According to the police, they told her, “We are going to use force to bring you to the identity check, so please cooperate.” And so she did. We have to say she looks quite comfortable with her ride. (The Guardian) 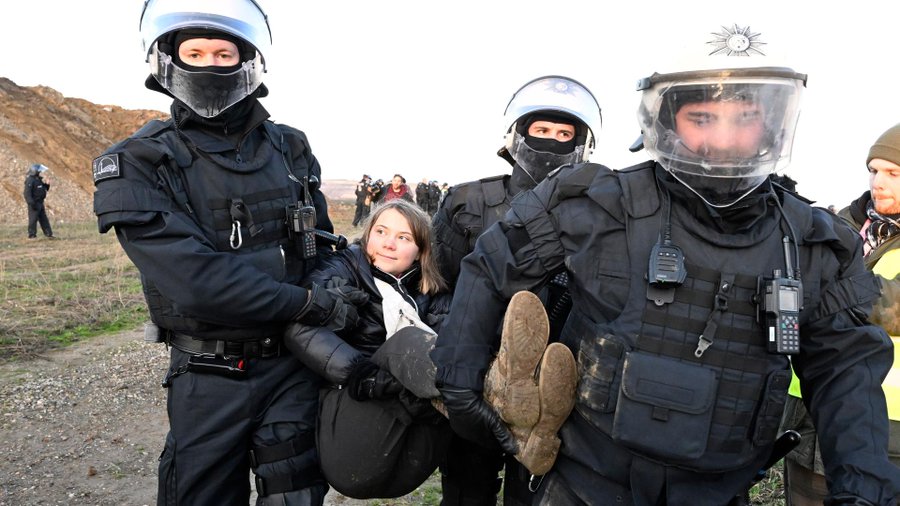 Very symbolic. I think it was an iconic moment in the sense of what that image means. But the fact that he would do it there, I don't know how he'd put words to it but he's just a humble server, man. That's how you want anybody to approach the position that he's in. That picture is going to be one to keep.

You can make up your own mind when you watch the clip below. (Newsweek)