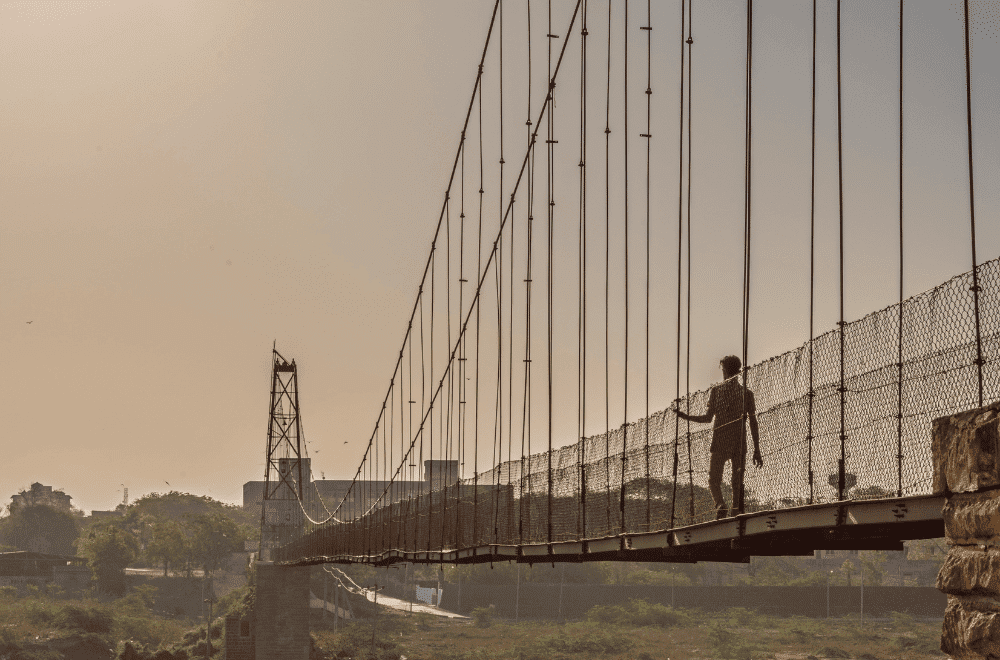 The Morbi bridge tragedy: The battle to assign blame

A suspension bridge in Gujarat collapsed killing at least 140 people—including 47 children and over 50 women. With state elections around the corner, the tragedy has already turned into an ugly fight to assign/dodge responsibility. While there are no definitive answers, the evidence is no less damning for all parties involved.


Editor’s note: You can share this Big Story with anyone and anywhere you like by sharing the gift link. Click on the new ‘gift box’ icon at the top of each edition on the website—and at the bottom of the first screen on your app. You now can share an edition just by copying that link—for up to five editions a month. Nope, the person doesn’t need a log in to read.

First, details of the tragedy

Around 6:30 pm on Sunday, October 30, the 143-year-old bridge collapsed into the Machchhu river below. At the time, over 500 people were on the bridge—enjoying the local attraction—which had reopened after repairs on October 26, the Gujarati new year. Many died trapped under the fallen bridge or the hyacinths that covered the river’s surface. You can see the moment it collapsed in this CCTV clip:

And you can see people desperately clinging to the edge of the bridge to stay above water here:

The immediate cause: is fairly obvious. There were simply too many people on the bridge—which was built to bear the weight of 125 people. The so-called Julto Pul is a suspension bridge—supported only by two sets of cables. Therefore, it is all the more critical to keep within the weight limits.

The final toll: The numbers vary from one media site to another. The Hindu cites the final death toll as 141—while Indian Express has 134. A total of 350 fell into the water—and 170 were rescued. The vast majority were women (50) and children (47)—and many families lost multiple members.

The arrests: Nine people have been arrested on charges of culpable homicide (not amounting to murder). Of these two are managers of the Oreva Group—the company responsible for repairing, operating and maintaining the bridge. Also arrested: two clerks who issued tickets for sightseers, two contractors who did the repair work on the bridge, and three security guards charged with controlling crowds on the bridge.

Background on the bridge: Morbi district is the ceramic capital of India—accounting for 70% of production with a yearly turnover of around Rs 500 billion (50,000 crore). The 230-metre-long bridge was inaugurated back in 1879 by the local ruler Sir Waghji Thakor—who was inspired by British feats of engineering. All the material was imported from England–and the total cost of construction was an impressive Rs 350,000. The bridge connects Darbargadh Palace with Lukhdhirji Engineering College—crossing the Machchhu river: 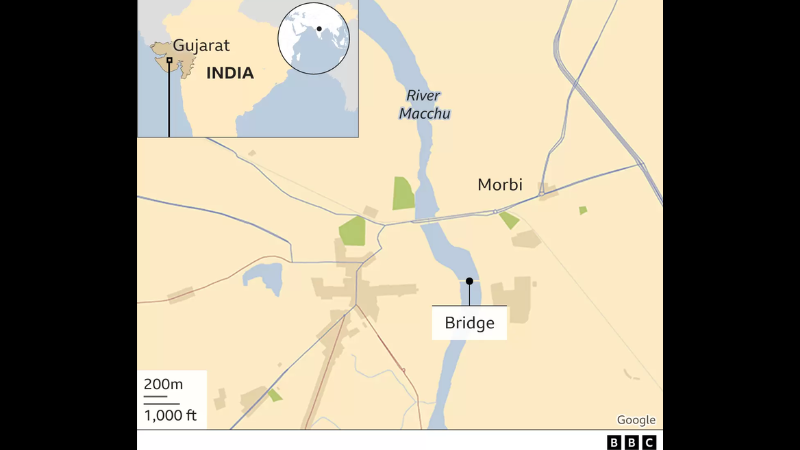 Question: Were the people to blame?

Oreva—the company responsible for the bridge—immediately pointed its finger at unruly crowds: “While we are waiting for more information, prima facie, the bridge collapsed as too many people in the mid-section of the bridge were trying to sway it from one way to the other.” All that rocking back and forth was happening right before the collapse, according to eyewitnesses: "Some 15-20 mischievous young kids were shaking the ropes of the bridge. Three times a noise came from it before it collapsed."

But, but, but: Experts say that we don’t know a lot about the impact of crowd behaviour on bridges—acknowledging that “a very excited crowd, or someone jumping can have a disproportionate impact.” But they also note that the way the bridge collapsed was unusual:

“Full information is not available, but based on the videos that are circulating, I was a bit surprised at the manner in which the entire bridge collapsed in a single instant. What is usually expected in incidents like these is that one or two suspension cables give way, and the bridge breaks and hangs before the rest of the structure collapses. It is a slower process.”

The instantaneous collapse suggests that “most or all the suspension cables were weak or corroded.”

Question: So is the company to blame?

About the company: Oreva group specialises in manufacturing CFL bulbs, wall clocks and e-bikes. There is no mention of construction as one of its activities. Its Managing Director is Jaysukh Patel—but the latest contract was signed with its parent company Ajanta Manufacturing.

The contract: Contrary to most reports, the company has been in charge of maintaining the bridge since 2008. But in 2018, it did not renew its contract due to a dispute over ticket prices—it wanted to hike the price of entry from Rs 10 to Rs 15. But Oreva continued to manage and maintain the bridge until 2020—when it approached the government for a fresh 15-year contract. This time, the local authorities agreed to the price hike, but the contract was only signed in March this year.

Key point to note: Indian Express took a look at the contract and found that it gave total control to Oreva—except for the ticket price:

“The agreement categorically states that the ‘income-expenditure’ for the bridge management would all be borne by Oreva and there would be ‘no interference by the governmental, non-governmental, nagarpalika (municipality) or, corporation or any other agency’.”

There is also no language in the contract about imposing an upper limit on the number of visitors on the bridge.

Who made the call? Here’s what The Hindu says about why the municipal authorities changed their mind:

“Sources from Morbi said that the local authorities in the town had been reluctant to hand over the maintenance to the Oreva Group but eventually did after a nudge came from Gandhinagar, the State capital.”

What’s notable: Oreva’s top management—including its Managing Director Jaysukh Patel—has not been named in the FIRs. Neither have any of the local government officials who had oversight of the bridge, which is still a public property. Oreva has not issued any official statement on the tragedy either.

Question: Are the municipal authorities to blame?

Local officials were quick to place all the blame on Oreva. Having given the company full rein, the local president Kusum Parmar claims maintaining safety was part of its remit: “We had handed over the bridge entirely to Oreva and, therefore, ensuring safety of visitors was their responsibility.” Yet, in their response to the tragedy, officials immediately claimed:

“[T]he private firm threw the bridge open to visitors without notifying us and therefore, we couldn’t get a safety audit of the bridge conducted…It was opened to the public after the completion of the renovation work. But the local municipality had not yet issued any fitness certificate (after the renovation work).”

This implies that the local officials had an oversight responsibility—i.e issuing a “fitness certificate.” So why didn’t they know that the bridge had reopened without one?

The timeline of the reopening: is fairly revealing:

And yet the municipality’s chief officer Sandeep Jhala insists that they only learned of the reopening from media reports: “He did not explain how the hundreds who took the tickets to walk on the bridge came to know of the ‘secret’ the municipality was not aware of: that the bridge had been thrown open.”

Point to note: According to The Telegraph, the decision to reopen the bridge was made under political pressure:

“A Gujarat bureaucrat told this correspondent on the condition of anonymity that Oreva’s managing director had not been in as much hurry to inaugurate the bridge on the Gujarati New Year… as the ruling dispensation was, ahead of the crucial state elections, expected to be held in December.”

On bridges and elections: The collapse of the bridge right before a critical state election is no doubt a big blow for the ruling BJP party. PM Modi—who is campaigning in the state—offered an emotional speech, and is slated to visit Morbi today. He declared: “My heart is with the victims in Morbi. I have rarely felt this kind of pain in my life.” But in a 2016 election rally in Bengal, this is what he had to say about the collapse of a flyover—which killed at least 26 people:

Needless to say, the clip went viral with the assistance of opposition parties. The Congress party is already eyeing a win in Morbi.

The bottomline: The Morbi disaster will likely turn out to be yet another story about politics and corruption. It is a tale that is far too familiar to Indians. Yesterday, this scene from ‘Madaari’ starring Irrfan Khan also went viral. And it pretty much sums up the real tragedy here:

The Telegraph has the best reporting on the timeline—and the politics at play. The Hindu has more on the arrests. Indian Express is the best on the contract awarded to Oreva, survivor stories, and how suspension bridges work. Firstpost pulls together the history of the bridge.