Hope you’re all marking Pandit Nehru’s birthday by celebrating the angels/devils in your life. ICYMI, last Thursday’s Reading Habit featured a wonderful curation by Rakhi Chakraborty of the best children’s picture books, novels, movies and TV series. Rediscover your inner child or share them with the children in your life:)

A bomb blast in Turkey

An explosion in Istanbul has killed six and injured 81. The bomb was detonated in a busy and crowded part of the city. No one has claimed credit as yet. President Recep Tayyip Erdogan said the attack “smells like terrorism.” Most likely suspects: members of the Kurdistan Workers’ Party (PKK)—an extremist group fighting for independence. See the moment of the blast below. (Al Jazeera)

US midterm elections: A big win for Dems

Counting is still underway to determine the fate of the House—which the Republicans are expected to win with a narrow majority. But the Democrats officially sealed their control of the Senate over the weekend. They could still pick up another seat this winter—as one of the races in Georgia requires a runoff election. So what does this all mean? For starters, the Senate confirms all key judicial and administrative appointments—so Joe Biden doesn’t have to worry about any Supreme Court or any lower court nominees. It also allows the Dems to block any legislation passed by a Republican-controlled House. As for the Republicans, a narrow majority in the House makes it more difficult to get anything done—and makes internal conflict more likely. Axios has that angle. This older Vox piece lays out what is at stake in the Senate. Washington Post (splainer gift link) has more on the GOP scramble to dump Trump.

The Ukraine invasion: The gamechanger in Kherson

The Russians officially withdrew from the key port city in the south—where four provinces had been annexed by Moscow just two months ago. But the Ukrainians have won back a city in shambles—without water or internet and little power. The recapture of Kherson may indeed be the “most decisive” event so far—and many Ukrainian soldiers finally believe they can win.

What’s next: According to the Wall Street Journal, the US views the win as a perfect time to negotiate—though not all European allies agree. However, this: “With Ukrainian troops winning on the ground, Mr. Zelensky and his top aides have warned publicly that pursuing peace talks with Russian President Vladimir Putin now would amount to a needless surrender.” So there’s plenty of reason for Kyiv to celebrate—but it is also heading into a long and politically tricky winter. New York Times has more on why Kherson matters to both sides. See the celebrations on the city’s streets below.

Also in Ukraine: A new mural by the world’s best-known street artist: Banksy. It appeared on the side of a building devastated by war in Borodyanka. This is the first confirmed Banksy sighting in Ukraine—though murals in his style have popped in various places. See it below. (New York Times) 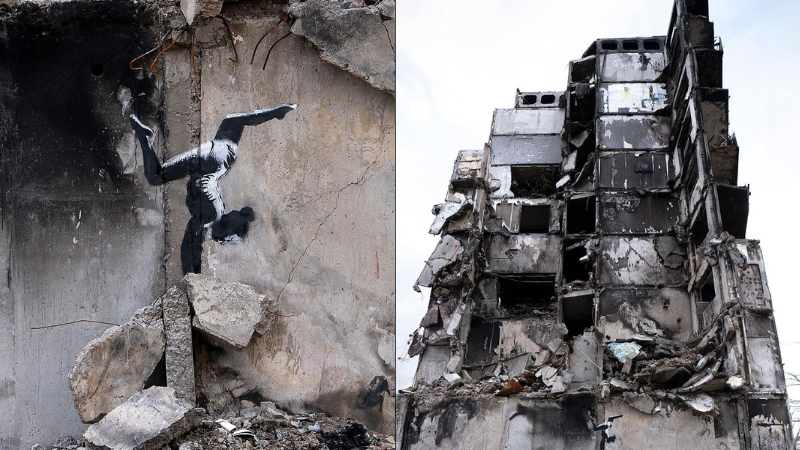 First, newly minted CEO Elon Musk pushed the company to roll out a paid version of the now infamous ‘blue tick’. A number of people paid for them—only to impersonate everyone from Lockheed Martin to George Bush and even SpaceX. The fake tweets even hurt Eli Lilly’s stock. So Twitter hit pause on the paid program. It introduced a ‘grey tick’ that would mark all notable accounts as ‘official’ for free—until Musk said he’d “killed it.” And yet, it has now come back to life like a zombie. And like the undead, it is extremely unreliable—appearing and disappearing at will. Musk also said all organisations will be able to track other accounts associated with them—though we don’t know how.

Meanwhile, Musk warned employees that the company may go bankrupt next year—which may be his first sensible assessment of the situation so far. NPR reports on why some experts think going broke may be a smart move. Gizmodo has more on the ‘grey tick’ saga.

Meanwhile, over at TikTok: The social media superstar is not immune from the bad economic weather plaguing the tech industry. It has cut its global revenue targets by $2 billion—dropping from $12-14.5 billion to $10 billion, reflecting the global slump in ad spending. Parent company ByteDance has also shelved plans for an IPO. (Financial Times (paywalled), Business Insider)

A big breakthrough in foetal therapy

For the very first time, researchers treated a genetic disorder by delivering the treatment inside the womb. Sixteen-month-old Ayla suffers from the most serious form of Pompe disease—which killed her older siblings. These children lack a key enzyme—which means they are often already born with damage to the heart, and rarely survive. But in Ayla’s case, doctors administered enzyme replacement therapy (ERT) while she was in the womb. The result: she is healthy and doesn’t show any symptoms of the disease. That said, experts can’t say how widely or often such interventions can be made based on a single case. StatNews has lots more details.

Ambani eyes Liverpool: UK tabloids are awash with rumours that Mukesh-bhai is one of the suitors lining up to buy the Premier League club. According to The Mirror, the current owners Fenway Sports Group is willing to consider a $4 billion offer—which won’t be a sweat for the Reliance boss. Then again, there are plenty of other wealthier contenders for Liverpool—including Sir Jim Ratcliffe and Sheikh Khaled. Well, if Ambani does buy Liverpool, let’s hope the Brits won’t get all agitated as they did when he bought one of their 900-year-old golf clubs. FYI: similar media reports suggested that Ambani and Subrata Roy tried to buy Liverpool in 2010, as well. (NDTV)

NFL in Germany: This Sunday, the National Football League debuted its first-ever regular-season game in Germany with the Tampa Bay Buccaneers taking on the Seattle Seahawks. According to the NFL, the league received 3 million ticket requests—for a stadium that seats 75,000. The Bucs won the game 21-16—though their best-known player Tom Brady appears to be struggling. The Guardian has more details. The Ringer has more on the rising popularity of American football in Europe. FYI: the NFL has hosted regular-season games since 2007 in the UK.

Under fire for rising gun-related violence, the government ordered a total ban on public display of weapons and songs glorifying violence. All firearm licences will also be reviewed within three months—and new ones will not be issued unless authorities are “personally convinced that issuing of arms licence was necessary due to extraordinary circumstances.” The state has witnessed a flurry of high-profile shootings—including a Shiv Sena leader Sudhir Suri, kabaddi player Sandeep Nangal Ambian and singer Sidhu Moosewala. (Indian Express)

The end of ‘The Terminal’ man

Mehran Karimi Nasseri was an Iranian refugee who became stranded at Paris’ Charles de Gaulle airport due to an immigration snafu. He eventually lived 18 years at the airport—and his story inspired the blockbuster hit  ‘The Terminal’—directed by Steven Spielberg and starring Tom Hanks. He was eventually moved to a shelter due to ill health. But Nasseri recently returned to living at the airport once again—perhaps the place he felt most at home. He died of a heart attack in Terminal 2F. NPR has the details while GQ has a longer profile from 2003.

One: Two WWII era planes crashed into one another at an airshow in Dallas. All six on board the two aircraft were killed. The tragic collision was captured on camera below. (Independent UK)

Two: A Japanese aquarium switched to cheaper fish to cut costs in these inflationary times. Unfortunately, some of the adorable prima donnas in the care—especially penguins and otters—are literally turning up their noses at the new fare. Their bhook hartal appears to have worked—and the expensive fish are back on the menu. Watch them throw tantrums below. (Huffington Post)