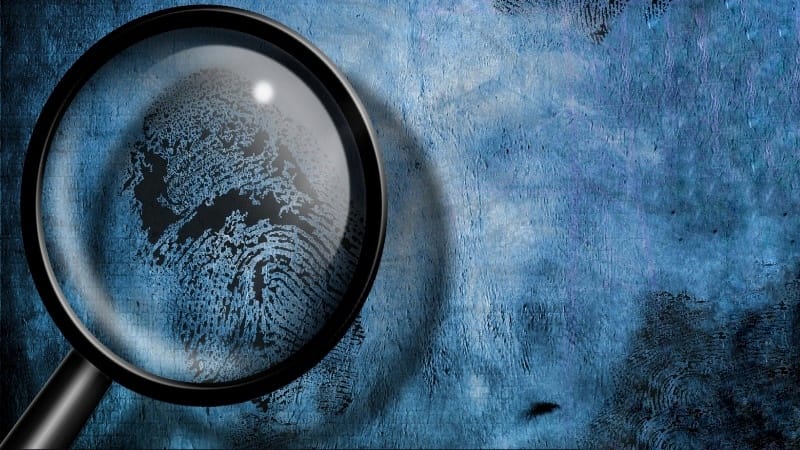 The police claim that two brutal killings by Muslim men—within the space of ten days—are part of a greater conspiracy involving Pakistan. Muddying the waters: photos of some of the accused that establish a BJP connection.

The Udaipur killing: Here are the known facts:

The arrests: The two men were arrested within hours under the anti-terror law Unlawful Activities (Prevention) Act. On Friday, the Rajasthan Police arrested two others—identified as Mohsin and Asif—for “providing logistical support” to Riyaz and Ghouse. The case has been handed to the National Investigation Agency—which has been granted 10-day custody of the suspects.

The suspects: Not much is known about the latest arrests, but we now have more details on Riyaz and Ghouse. Riyaz had a reputation as being “erratic” and “deeply religious.” OTOH, Ghouse was well-liked in the community, and taught kids in the local mosque—where he’s described as a “polite, punctual teacher who never missed a class.”

The Amravati killing: Here are the available facts:

The arrests: The Maharashtra police initially suspected a contract killing—but the local BJP members pointed to Kolhe’s support for Sharma. They have since arrested seven men—including the alleged mastermind Irfan Khan—and confirmed the motive was revenge for Kolhe’s WhatsApp message. This investigation too has been handed over to the NIA by the Home Ministry—which said “the conspiracy behind the killing, involvement of organisations and international linkages would be thoroughly investigated.”

The suspects: Irfan Khan runs an NGO that claims to help “rehabilitate differently able(d) people from the underprivileged segment.” Khan is being described as the “mastermind”—who assigned specific tasks to the others, and provided logistical support like the vehicle and cash. A number of the other suspects are his friends. The veterinarian has also been arrested for instigating the crime.

The investigation: A larger conspiracy?

It isn’t yet clear why the government thinks there is a connection between the Udaipur and Amravati killings. But “sources” have shared their theory about the two Rajasthan suspects with the media.

The Pakistan connection: Within a day of the Udaipur murder, the Rajasthan government flagged Ghouse Mohammed’s links to Pakistan. Specifically, in 2014, he visited the offices of a religious group Dawat-e-Islami in Karachi and “spent about 45 days” in the country. More recently, he’d visited a number of Arab countries—and this: “For the last two-three years he was making calls to eight-10 phone numbers of Pakistan.”

Point to note: It isn’t clear from the media reporting whether Dawat-e-Islami is an extremist organisation—or just a religious group with a purist ideology. This Indian Express profile can’t seem to make up its mind—while India Today paints DeI as a dangerous sect connected to a number of high-profile killings. Meanwhile, the organisation has denied any link to Ghouse or the killings—insisting it is “purely an educational, missionary and charity institution and globally preach peace in our lives.” The Deccan Herald notes that unlike other extremist groups in Pakistan, Dawat-e-Islami is “not on the radar of the law enforcement agencies.”

The latest theory: shared by “sources” claims that the NIA has uncovered a Pakistani handler named Salman Bhai who “meticulously planned” and “instigated” the Udaipur killing. He urged Ghouse to “do something spectacular” to avenge the insult to the Prophet—since “peaceful protests will not yield any result.” Also in the mix: A local ringleader named Babla Bhai who created a hitlist of 10-11 people—and assigned different groups to attack them. He has not been identified or arrested as yet.

In recent days, photos of the other Udaipur suspect Riyaz—in the company of BJP leaders—surfaced in the media. But they were framed very differently by independent and mainstream media outlets.

The Facebook photos: were posted by Irshad Chainwala and Mohammad Tahir—well-known members of the local BJP Minority Morcha and the RSS-promoted Muslim Rashtriya Manch. One caption in a Facebook screenshot captured by The Wire describes a garlanded Riyaz as a “BJP karyakarta” (worker): 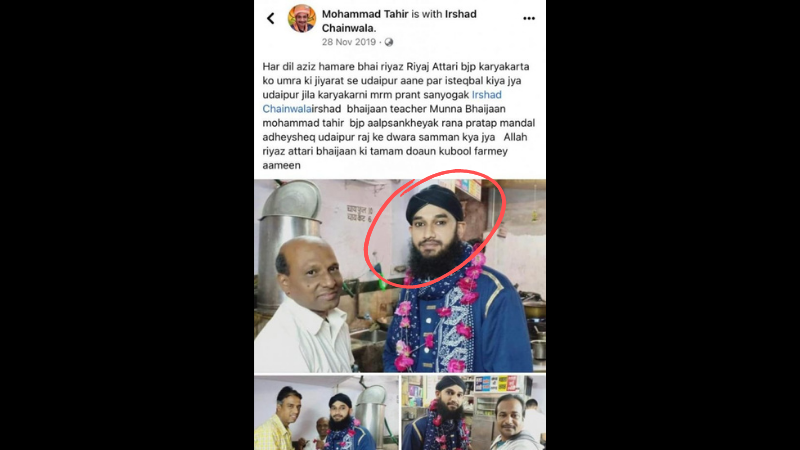 Others show Riyaz posing with prominent local BJP leaders—like the leader in the Rajasthan assembly Gulab Chand Kataria below: 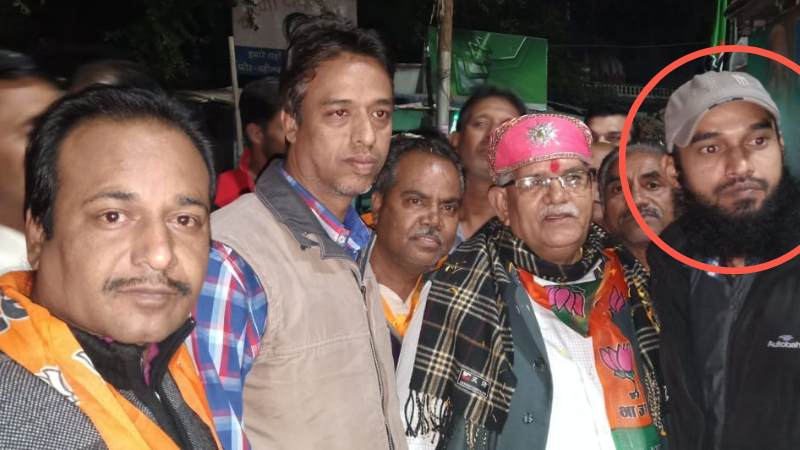 Point to note: The Wire does not offer any theory about the photos—or the BJP link. But the Congress party happily held a press conference where they waved around the photos—and asked leading questions:

“The Union Home Ministry announced a probe by NIA within hours of the gruesome incident at Udaipur. The Ashok Gehlot government in Rajasthan accepted it, but now I ask whether this was meant to cover up BJP connections of the accused.”

The ‘infiltration’ narrative: Interestingly, the photos first became public as part of an India Today scoop—which framed the photos as evidence of a “plot” to “sneak into the BJP’s Rajasthan unit for at least three years”—but without any attribution to any source. And it quotes BJP leader Chainwala—who paints Riyaz as a two-faced personality who “wanted to work with the party”—but criticised it bitterly in private conversations.

News18, however, goes even further—and attributes these revelations to the NIA investigation based on information from “sources”:

“The accused duo also carried out a recce of BJP establishments and revealed during interrogation that they were in touch with handlers in Pakistan who asked them to maintain a relationship with the local BJP leaders, sources said. ‘As a part of the game plan, they started joining BJP programs and tried to develop knowledge about the leadership. They wanted to visit Pakistan again but somehow it never materialised,’ a source said.”

“During interrogation, accused Riyaz Atri has not uttered a word about his trying to enter BJP or target the saffron party leaders. The process of transferring two accused to the NIA custody is on. According to internal security experts in Delhi and Rajasthan, neither Atri nor Ghouse Mohammad have revealed a larger conspiracy on their part to target BJP leaders.”

The official BJP response: has been to deny any connection to Riyaz. According to the local Minority Morcha: “Anyone can have a photo with any leader. It does not mean that he is a member of the BJP.” Other senior leaders have taken the same line.

Not helping BJP’s cause: A far more embarrassing set of photos out of Jammu. Local villagers helped arrest two Lashkar-e-Taiba (LeT) militants. The police had declared one of them—Talib Hussain—a wanted man:

“Hussain was in constant touch with LeT terrorist Qasim based in Pakistan and was involved in at least three cases of improvised explosive device blast in Rajouri district, besides civilian killings and grenade blasts.”

The slight problem: Hussain had been appointed to lead the BJP’s IT and social media in Jammu—and he’d posed for photographs with J&K president Ravinder Raina and—wait for it!—Home Minister Amit Shah. To be fair: NDTV says Hussain had recently resigned from his post.

The official BJP response: The spokesperson blames the problem on the party’s new system of online recruitment—and reiterated the theory of ‘infiltration’: "I'd say this is a new model—entering the BJP, gaining access, doing recce... there was even a plot to kill the top leadership which was busted by the police.”

The bottomline: Human tragedies are rarely helped by murky politicking—aided and abetted by terrible news reporting.

NewsLaundry has a detailed report on the lead-up to the Udaipur killing—while Scroll profiles the two main suspects. The Hindu has the most details on the Amravati murder. The Wire has the photos with BJP leaders—and details on the connection with the suspects. News18 lays out the theory of ‘infiltration.’ For more on the Jammu case, read The Hindu or NDTV. Indian Express has the political fallout for Rajasthan CM Ashok Gehlot.